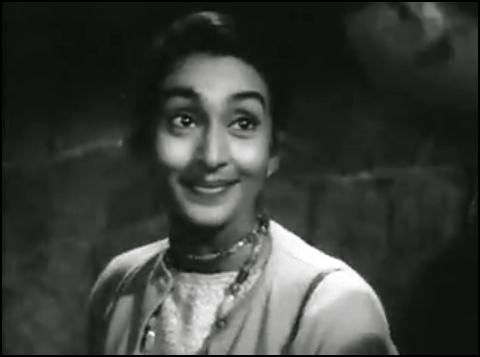 Hey, a new blog about my movies!!

I am pleased to announce the official launch of MUSINGS, a new blog by S. Basu which he has announced will deal chiefly with Nutan, since the author is a die-hard fan of the lady, but also perhaps on other topics. As he puts it, "it would be mainly on her, though frequently I would be moving off topic". We have been exchanging now for some time, very pleasantly I must say, and M. Basu's astounding credentials concerning Nutan is that he has seen almost all of her 90 something movies, that is, all the films one can see, because some, he regrets, are either lost or hidden where the public can't find them. I'm sure he'll explain the situation if some of you are interested!

He has already started writing a few posts, and I recommend two of them about Nutan's early movies,  Aagosh (1953) and Heer (1956), the length of which must not frighten you: they are superb pieces of work, with a wealth of explanations and details, great photo work, all coming from somebody who has spent years loving and enjoying the great artist that I have (modestly) discovered only relatively recently.  I suppose he plans to go over some of her lesser known films, which would be of great interest, since people have only seen and read about the better known films. He tells me he has a plan to cover the main parts of her life, starting from the cradle! Well, lets' see how far he gets!

Anyway, all the best, Musings! Hurray for our heroine! I'm sure you will all love it!