Swami (2007) is choreographer Ganesh Acharya’s first try at directing a film, and in spite of some clumsiness, it’s full of good surprises. It is inspired by a desire to uphold the values of honesty, faithfulness and humanity which the director obviously believes in. It is a clear act of defence of the value of traditional Indian attitudes and beliefs (decency, piety, dedication, hard work), which would perhaps be boring if they weren’t embodied by Manoj Bajpai, whose presence fills the film. What I especially enjoyed in his acting is the difference he makes between youth and age: Swami the old man is nicely suggested, and one follows him with interest. What is also noteworthy is the fact that the film starts with the married couple of Swami  and Radha (a radiant Juhi Chawla), we don’t get to see how they fall in love, how they first met, etc. So what we have is, from the start, a film about the love between a man and a woman that will not use the easy tricks.

I mentioned some clumsiness: for example, the fact that Radha buys Swami that rocking chair of his with the money meant for her treatment, and subsequently dies from that “generosity”. But that isn’t generosity; that’s a wrong idea in the scenario. There were other ways of making Radha die and Swami display his besotted faithfulness than introducing this bizarre twist in the story. Then there are the “comical” moments with the park cronies, which probably belong to a comedy tradition appreciated by the Indian audiences, but I found them hard to watch, even if they connect with the theme of friendship.

I suppose the name “Swami” is not a haphazard name, and that it has been chosen to carry into the film some of the belief this word has in Hinduism. It seems that the main idea behind this word is renunciation:

The word swami means master; it means striving for the mastery over one's smaller self and habit patterns, so that the eternal Self within may come shining through. The act of becoming a swami is not so much an acting of becoming, of adding on, of allegiance, as it is an act of setting aside, of renunciation. A swami is a monk, one who has set aside all of the limited, worldly pursuits, so as to devote full time effort to the direct experience of the highest spiritual realization, and to the service of others along those lines. Renunciation is not anti-world, in any sense of the world being a bad place. Rather, it is a matter of priorities about how one will spend his or her time, the twenty-four hours in a day, and the seven days in a week. Traditionally renunciation is the fourth of four stages of life, although one who feels the call might renounce and become a swami at any stage of life. (reference) Is the Swami which Manj Bajpai embodies a “swami” in the religious sense (not forgetting that, together with his wife, he is a Brahman)? Well, perhaps I could say yes and no. Renunciation is indeed a key-word in the film: the way Swami renounces to his beloved rocking chair after his daughter in law has sold it, (saying it was broken and too old and therefore dangerous in a flat with a young child): he knows she was wrong, that she acted out of spite, yet he dismisses the case, and makes them all understand that objects aren’t what count: only people do. Also the way he renounces to his flat, when  Anand and Pooja are asked to leave for the US at the end: the entrance in the ashram indicates clearly his “swami” condition.

On the other hand, even if he presents many aspects of the sage, Swami is also a passionate man, at times even headstrong and foolish. For example, his obstinate will that his son and daughter in law must go to the US, because that was Radha’s death wish: doesn’t this look authoritarian? Swami is not renouncing here, he’s clinging to a promise made fifteen or twenty years before in very different circumstances. He says himself, concerning the chair, that Radha would have agreed to sell it: so why wouldn’t she have agreed to postpone, at least, the children’s departure to the US, since they had decided not to go for their baba’s sake? They obey him, but we see that they aren’t going to be happy without him. So isn’t Swami still the prisoner of that passion for his wife, and far from having renounced everything, still craves to possess her, as the last scene of the film shows so well? 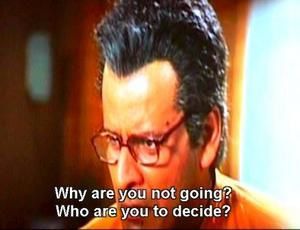 Is renunciation wisdom? Or passion? Many religious (and humanist) traditions, in the West and the East alike suggests that to be free, man needs to free himself from the passions. He cannot be at peace if he is the toy of his wills and desires. He has to adopt a discipline which will shape him into renouncing to passing whims, and to establish him into lasting happiness, above the sea of troubles of worldly cares. This is the origin of ascetic life, and of monasteries where men desert society and its thousand contradictory suggestions, its pleasures but mostly its illusions, in order to come closer to that inner peace that is the source of harmony and tranquillity, both cosmic and personal. Yet there is also a tradition which puts passion higher than renunciation: in the ascetic way, doesn’t man follow an ego-oriented path? The immediate purpose of the ascetic is to free himself from the turmoil of passions, to reach peace in himself. Others are at least partly excluded from this process. I realise that the real philosopher has vanquished his disorderly self in order to connect better with the outside world which is of course society and his fellow sufferers. But there is perhaps a risk that the ascetic attitude disconnects the self from society and others. Serving one another is perhaps more humble and more efficient if love is put forward from the start, in spite of the parasite effects of an imperfect self, because then the transforming virtue of love works not only on the receiver but on the giver too. Loving and serving are in themselves disinterested, and so carry renunciation along with them. This renunciation is an effort, of course, as in the other ascetic way, but it is oriented not towards building a better self: rather it trusts in the power of love to recreate and renew the hearts of all involved. So in that perspective, passion is wisdom: but passion in the sense of love, not the enslaving passions of the individual of course. Love for a partner is the first step towards that broadening of our circle which ends in offering up one’s life for humanity. So it is ultimately wise to give way to love, even if one knows that love has a passionate and cataclysmic dimension. Love (I mean Eros) can enslave, yes, and make one suffer, yes, but we were made for love, and if giving way to love is a risk, if it can engulf the self in a turmoil of contradictions and suffering, it is wise nevertheless, because it shows a trust in life greater than the sometimes limited attitude of ascetic protectiveness. Swami alludes to these issues, and refers to these life choices between keeping and renouncing, between giving and receiving. Swami is the man who has been changed, and broadened, by the love for his wife, who reaches towards a renunciation that this love has taught him. He has mastered certain selfish impulses, but remains very human in his devotion to the master who has shown him his way. Who can blame him?