Absolutely excellent. The hubris of petty officers, the crisis and tension coming from lust and gratuitous violence, the horrifying banality of colonialism, the abuse and victimization of women: all these elements combine to create a tragedy which the Greeks would not have disavowed. We are the transfixed witnesses of a horrendous, and at the same time, magnificent process: the price of a woman’s virtue depends on how much it costs for the community. Even feminine solidarity crumbles when submitted to enough masculine pressure… And yet, does it? The fantastic last scene of the film, when everything seemed lost, shows that women have stupendous resources that make one realise the strength of a resistance in which women take part, and I am reminded of the British resistance to Germany during World War 2, when the wives and mothers of soldiers took part in the war effort, and replaced them in the factories and mills of the besieged island. So, hurray for women’s valour!

(This is a review posted at Jaman.com, where the film can be rented for $1,99) The film clearly states that when only men rule, when their authority is unchecked by the natural balance that comes from a normal interplay of the sexes, they lose their human status and revert to animality. There is one interesting scene near the lake, at the beginning of the film, when Sonabai (Smita Patil, what eyes! what acting!) explains to the freshly arrived Subedar (tax-collector, a riveting Naseeruddin Shah) that it is for village people and animals to drink: the Subedar then ironically (but perversely) describes himself as ‘this animal’: will she give him to drink? She then, as a woman, restores him to the status of man:

“As all men you shall bend and cup your hands.” 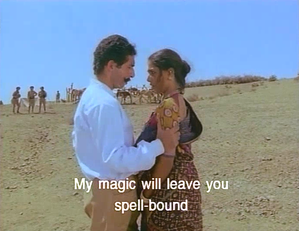 Of course this defiant attitude is not understood by the Subedar as a statement of the true social order: he sees it as a sign of that seduction game which reduces love to a fight between two consenting warriors. Such a version of love (epitomized for example in the Spanish type of courting), for all its sophistication, is not very far from animality. Men see women as a prey, women see men as a predator, and the “game” (the word here has its twofold meaning of play and prey) is to increase as much as possible the pleasure of the hunt. Much of our modern misunderstanding of what love is comes from this perverted game-making. Women are turned into game to be sought and caught, and they in return must escape and defend themselves, using their teeth and claws… Or otherwise submit as she-cats do, because it is supposedly the natural order of things. In one other passage, the “Gandhian” schoolmaster arrives at the Subedar’s camp, holding a maimed child in his arms, and complaining that it is his men’s horses, rampaging through the village, who have hurt the boy. The reclining sybarite (he has just entertained himself with the villagers’ homage to his ‘art de vivre’ - they have never heard a gramophone before) laughs his head off at him (and all the villagers roar with him): what? his men’s horses have done that?  But, as everybody knows: Ketan Mehta knows what he’s doing. Intelligence, or common sense, is one of the film’s main themes. For example, “intelligence” is what the tax-collector requires from the the Mukhi, or village chief (a convincing Suresh Oberoi), when the former asks the latter to bring him the woman he’s lusting after, otherwise, even if he “dislikes bloodshed”, he will be obliged to use force. It is “wisdom” that the Mukhi asks from Sonabai when she is shut up inside the factory and refuses to open. The problem with intelligence and understanding is that it is a cultural thing; you need to develop it, to encourage it. It needs a fostering environment to increase and be useful. This is the awkward conclusion which the schoolmaster comes to, when asked about India’s independence: what’s the use of it? How do we recognise it? He says: “you need to study to feel its value” Because independence and freedom comes with thinking about one’s alienation and oppression. An animal ignores he is enslaved by his instincts. A man might too, in part, if he’s uneducated. The theme of women’s emancipation is naturally linked to this question of intelligence, and it is interesting to notice the reasons given by the other women in the street to criticise Saraswati (a very impressive Deepti Naval), the Mukhi’s wife, when she takes her daughter to the Gandhian schoolmaster’s class (thus said to be “out of her mind”): "school won’t help make the girl into a lady", and: "no one will want to marry her!" So, parallel to what the film says about women’s resistance to men’s power, there is a statement about women’s access to knowledge as well. Feminine intuition (or even instinct) is not enough. And indeed, alongside Sonabai, there is Saraswati: two images of feminine power. This is also shown in Radha’s story, which serves, it seems, as a contrast to Sonabai’s. Radha is a young girl who is promised to the Mukhi’s brother. The difference with Sonabai is that she accepts to favour the Subedar’s lust one night, in return for a trinket which she shows Sonabai when both of them are behind the closed doors of the factory. Radha tries to convince Sonabai that she would get something in exchange for her acceptance of a night with the bully, an acceptance that would signify her rescue from the dangerous confinement of the factory. All this even if that night has cost the young girl her beloved; we understand this when Radha's father comes to see the Mukhi and begs in vain for him to accept his brother to marry her. But the peace of the village costs more than the happiness of two young people, and the virtue of a young woman can be traded even by other women if the pressure is too great. By the way, the notion referred to as womanly virtue is “self-respect”. It is Sonabai‘s self-respect that Abu Miyya the old factory guard, (an impressive Om Puri, with a yellow mane like a lion[1]), is defending against the intrusiveness of the soldiers who ask him to surrender the fleeing young woman, and it is the women’s self-respect that one old villager refers to at the Mukhi’s village meeting, after some consciousness of human dignity seeps back into the heads of those present. Ironically, it is also his “self-respect” that the Subedar claims is “at stake” when he is discussing Sonabai’s transfer into his tent. If one disregards this pompous mockery of true virtue which the Subedar disgraces willingly, what is this “self” which is alluded to here? What does the film tell us about feminine integrity? Why does one woman resist being unfaithful at the cost of her life, and another regards her body as accessible to a stranger? “Only the rich can afford to have self-respect”, says one of the women to Sonabai: is this true? 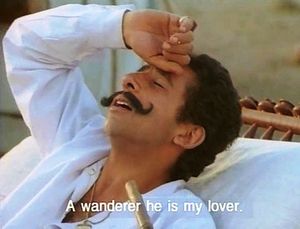 What is interesting is that this discussion of self-respect in the film brings out a discussion of what it is to be a man. Abu Miyya for one says, speaking of his refusal to open the door: “there is at least one man in this village”; earlier on, a villager also said that the cowards in the village meeting were women and not men. So claiming self-respect is not only being more human, it is being manly, in the sense of courageous. It is vindicating certain limits to oppression and alienation. It is saying that the self is like a guarded city, a temple where the doors open for those who knock gently, but close on enemies and bullies. It is ready for a siege, ready for a sacrifice of its own freedom of movement in favour of the greater freedom of spirit. It isn’t a question of money or status, but, says the film, it is at least partly a question of education. Sonabai resists, Saraswati resists, and the two of them represent Women building tomorrow’s better society. Certainly Gandhi would have been proud of both of them. One last word about this Mirch masala, this hot red spice which plays a crucial role in the film’s thematic. The Subedar calls Sonabai “hot stuff” – he’s right for once, even if in his meaning the expression has rude undertones. I believe Ketan Mehta has chosen this title because it represents the fiery spirit of the Indian women, or at least, the spirit they need to acquire in order to resist oppression and false civilisation. Red is the colour of revolution, the colour of blood, the feminine colour. Perhaps we can also read in this title a subtle criticism of the bland masala movies which do not often enough question the assumptions of the Indian social status quo, especially regarding the role and the future of women.

[1]The other lion of the story is the Subedar himself, who, say some of the characters now and then, demands his « meat », and whose strength is so fearsome that all the other village « animals » are too spineless to refuse him.