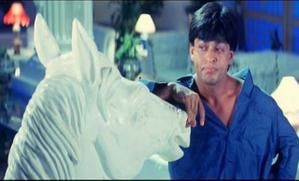 Is friendship possible between men and women?

This is the question which sprang to my mind while watching Hum tumhare hain sanam. Old question, of course, but well, since it seemed to have been important for the director (K.S. Adhiyaman), and that his film, in spite of a number of imperfections, is worth watching, I’ll just say a few things about it.

First, for those who haven’t seen the film, a quick summary: rich businessman Gopal falls in love with Beautiful Radha, who has been raised with real brother Prashant, at present jobless, and foster-brother Suraj, a successful singer. Respectively, Shahrukh Khan, Madhuri Dixit, Atul Agnihotri, Salman Khan. Radha has always lived with her brother, and when she marries, she takes him with him; and she has always been very close to Suraj, and when she marries, their relationship continues to be as close as before. But Gopal soon resents the fact that Suraj is continuously around: he starts suspecting his wife of double-dealing, and it all builds up to a crisis, when Gopal chases Radha and Prashant away from his home. Suraj at first fails to understand, but soon sees that he shouldn’t have continued to behave with Radha the married woman as he has done before she was married. In a few more scenes which I won’t disclose, he manages to set things right, and the couple and friends are reunited, as they should be. This story is not very far from Mehboob Khan’s Andaz, reviewed on this blog not very long ago. We have the love-triangle, the singer and the special attraction of music, and we have the scene of the confrontation. There are major differences, but these similarities partly explain our issue here. This is a film about “platonic friendship”, and vindicates the right for right for men and women to behave as friends, no harm done. Well, the director probably didn’t want to be very militant about this cause, but nevertheless, he’s used the theme for his story.  Suraj does realize that he should have behaved differently with Radha, and does blame himself for not having realised it soon enough. But then comes the Suman “Deus ex machina”. Suman, played by “Special appearance” Aishwarya Rai, is Salman’s girlfriend, and she goes to see Gopal, blaming him profusely. And she’s the cause of the reversal of the whole situation, not Suraj. It’s because of her scolding of Gopal’s self-centredness that he changes, and decided to see Radha once again. So what are left to conclude? Isn’t it logical to think that KS Adiyaman is more critical of self-centred rich husbands than of over-intrusive brothers? Isn’t he implicitly saying that a brother and sister can continue to be intimate friends without having to refer to the new bond created by marriage? The film does of course criticise Gopal’s suspicion of his wife. It’s clear that she has never thought of deceiving him, and that he was wrong to believe so. But I think we can sympathise with Gopal a little: he is right in saying that his wife did not really show a preference for him as husband, and continued to praise Suraj’s accomplishments after she had married him, as if this complimenting had no contrasting effect on the listener. Now the psychological verisimilitude of the situation, we all realize, is not very convincing. The film doesn’t impress much from that angle! So when the Othello-Desdemona scenes occur, we cringe. Playwrights and film-makers have often done that so well that THHS is really deficient here. We would like to shout at them that they could at least have that good explanatory talk which all sensible couples would have if a drift of the kind shown in the film occurred. This only serves to show that the director (perhaps inspired by a laudable social intention?) wanted to say something about caring for women, for wives, but forgot the basic rules of love-relationships in the process. First this one: when a man is very close to a woman, he cannot forget that she is a woman, and that he is a man (and the same works for women of course). The interaction between men and women is one based on difference, which is the same as possible complementarity. The sexual bond is essentially one of complimentary relationship. This happens already between brothers and sisters, supposedly “protected” by the interdiction of incest, and so it happens even more between adopted siblings, which is the situation of the film. I don’t mean that Radha and Suraj are in fact in love, but that their apparent ignorance of a husband’s sense of possession of his wife is very strange. Perhaps that has to do with the Indian culture? Marriage is so often a social bond there that the director might have felt justified to present amorous friendship as more authentic? I think this “platonic friendship” exists, of course. But I have a tendency to think that it’s more a situation among men and women whose sexual differences are reduced. As soon as these natural differences appear, I believe the sex-based relationship superimposes itself on the previous relationship. Nature is there to make this difference, this complementarity, visible and sex-based. If in some cases, this sex-based relationship is absent, or obliterated, then I believe we are more or less outside the norm. So when Gopal retorts to Suraj that it is him, Suraj, who has a complex, I go along with Gopal. After all, homosexual men, for example, are a category of men who can have this “friendship” with feminine-looking women most easily. But even homosexuals know enough of the male code of honour to realise how provoking it is to continue to be intimate friends when an official intimacy has been established for one of them through marriage. So the result of this little investigation seems to indicate that “Platonic friendship” is more a wish than a reality. Understandably, there are certain men (more than certain women, I’d wager) that would like to establish the natural existence of such a bond. I for one tend to see it as a disguise for a relationship which doesn’t want to admit another name. I think Hum tumhare hain sanam makes the mistake of disregarding this fundamental human reality that one man and one woman will always want to be loved exclusively, absolutely. And if a third party comes into play, it’s because something wrong has happened in the relationship. (Wow, all this must sound very preachy; I’ll try to avoid in the future)