With his title “The dark prince” I am not so much referring to Ajay’s skin colour, even though there are only few among the best-known Bollywood stars that do have a dark skin, but more to his character, what I can guess of it. I’ve always felt in him a sort of broodiness, a mystery, which his marriage to Kajol – pretty much the opposite I would say – hasn’t dispelled. I didn’t know before calling him like that that Amitabh Bachchan had done so before, almost: “the dark horse of Bollywood”! (here) There is something intense and powerful in Ajay’s personality, something commanding, and not without its own charm. This charm is made of a very masculine style, proud chin, strong bones, but most of all, I’d say, it’s the eyes that create it. It seems he’s drowsy half the time, even drunk in some photos. He looks around as if he’s made an effort to come, as though you’ve troubled his slumber and might incur his wrath! Yes, there’s something animal, stallion-like why not, or bearish, but I prefer the prince metaphor. He has the superior pride, the detachment and the ease associated with the legendary moguls (well, who knows?!), a mixture of effortless strength, ironic authority and natural charm. Critics often mention his originality, the fact that he has trodden his path at his own pace, has come from action films to romance and from acting to producing and directing. I don’t know that all that is SO very original, after all, Ajay has been fed on cinema, he has always evolved in and around the industry (his father was a renowned stuntsman), so in fact I’d say it’s his world. He’s an intelligent guy, enterprising, surprising even, but as far as I’m concerned, and by international standards, I couldn’t say more. It’s true he’s explored roles that other might have turned down, roles in “serious” movies such as Yuva or Raincoat, and has had a political involvement (from what I read, he joined the PJB in 2004). I wonder if that has anything to do with playing in Yuva: or perhaps it’s the other way round? While I’m at it, I also enjoyed him in Khakee, and I’ve seen him in some masalas such as Chori Chori or Hum dil de chuke sanam, but you’ll agree with me these aren’t the most demanding of films! And I’ve seen some rather poor shows, unfortunately sometimes produced by Ajay himself (Raju Chacha, Hum kisi se kum Nahin, Ishq) I’ve not seen Omkara, in which he’s said to be quite good. (He can smile!)
I’d like to explore another feeling that I have when considering Ajay Devgan. I was watching a few videos where he appears alongside Kajol, and was struck by what I don’t know how to interpret completely, but which is a mixture of haughtiness, or shyness, and certainly a self-consciousness that he can’t really master. He’s always got that finger on his mouth, and seems retiring, and ill at ease in front of the camera. It’s strange he should be, considering his career, but it’s a fact. There is one moment where he’s standing next to Kajol, she’s holding his arm, but he’s almost moving away from her, as if he wasn’t really pleased to be with her! I even thought I saw her looking at him with a “what’s the matter, why are you so distant?” sort of look. Okay, I don’t want to make a lot of it, but I think that this is part of what I called his mystery. Ajay doesn’t completely coalesce with show-business, he has that complex of superiority, that absence of a real sense of humour; he never knows for sure if he’s not overshadowed by others, Kajol first of course. The people’s princess is such a glow next to him! 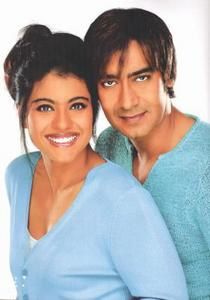 And so, who knows, perhaps this retiring personality, this inability for the “real Ajay” to feel completely at ease in the “public Ajay”’s clothes, perhaps this is what owes us his originality and his passion? If you fit too perfectly in the persona which the public has created for you, isn’t there a risk that you become too predictable? The public is like a lover: if it has fallen in love with you, it wants you always the same, it doesn’t want you to change, you’re a prisoner of that character which it needs you to perform. Up to a certain extent, Ajay’s luck is that he can’t conform to his public image, somehow he’s ill at ease with it, and so he gains an aura of inscrutability which paradoxically endears him to his fans. If he’s clever enough, he just needs to cultivate this mysterious, superior airs! In fact I think he does just that: for me his frequent dark glasses are a way to establish that calculated distance from us. It might even mean that he’s falling prey to the star-system! He can’t really be blamed for that, but the risks are that he’ll lose some of his soul-searching in the process! He’ll definitely need to come back to more demanding films where he doesn’t need to pander to the public’s tastes, but help invent artistically satisfying characters. Hard work, risk-taking and modesty: that shouldn’t displease him!