« Meenaxi, tale of three cities » by M.F. Husain (2004), is exactly that, a Bollywoodian befuddlement. The film is a pathetic attempt at building “something else” than a traditional love-story, and, because of lack of inspiration or lack of artistic common sense, the result is just a bad film. There’s everything it needs to be bad: no story, instead an arty reflexion on story-telling, elaborate touting technique, using sexy actors, suggestive but unconnected symbolism, and glossy photography (the film’s only merit). The whole thing reminds me of Shabd, another very boring movie where Aishwarya Rai and Sanjay Dutt were striving to do their best in a writer’s filmed “experiment”. The trouble with such movies is that the experimental dimension betrays the lack of experience, precisely, of the director, or perhaps more simply their lack of artistic sense: the two films are so obviously based on their fascinated desire to film the beautiful people they have in front of their camera lenses, that what they come up with is nothing more than an advertisement for their personal desires. Strikingly beautiful actors simply cannot transform their attractiveness into a movie! (As the ageing Raj Kapoor should have known).

I had actually bought this film when I wanted to write something about Tabu some time ago, and didn’t get round to watching it. But nothing could have been wiser! In Meenaxi, Tabu swerves from the hysterical to the bossy, from the mysterious to the girlish without any apparent reason… Well yes, there’s reason: now she’s the writer’s muse, and adopts an overweening tone and attitude, then she’s his creation, and tries to be who he believes she should be… Such waste is astounding. An IMDb user calls the film a “self-indulgent waste of time”. M.F. Husain is a painter, a great painter, they say… well, that’s OK. But I’m not sure he should have wandered away from his first taste. I suppose painting can associate itself with cinema, I’m sure there are examples of good directors who are also painters. But there is something which in my mind, both the painter and the director should forget when they create, and that is a fascination for the surface, for the mirror of artistic objects. The artist for me is the one who will suggest what is beyond (or below, or above) the surface of what he is painting or filming. Even if the picture shows us the painter’s (or the director’s) obsession with an object (this object could be a woman’s figure, or a young man’s seductive face, as in Meenaxi), I believe this obsession should be generalised enough for us spectators to sympathise with it, or at least react to it on our own plane of meaning and appreciation. 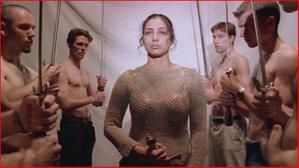 When I read this sort of comment “the film, while constructing a fictional story, leaves open to interpretations and readings by every viewer” (back of the Yashraj DVD box), I realise that there is a big risk that the film might well be completely hollow. Certain people just have nothing to say, or what they would have to say unfortunately has been said before, and better. In that case, instead of just remaining silent, and wait for a real message to come, they use the meta plane, where they speak about their problem of not being able to speak. For me this is as much parasitism. When you are a film-maker, either you do your job, and shoot a product, which will be consumed for what it is: a comedy which finds its justification in people’s need to have a good time, or an adventure film that people will enjoy because it shocks them out of their routine, or you have indeed something original and creative to say and make, and that’s an entirely different matter.

Because whether experimental artists like it or not, art is a mediation. It must lead us somewhere. It should take us along with it to some terrae incognitae. These unknown lands might well be inside the artists’ minds – they very often are – and they are many unchartered lands which artists will continue to make us discover, even lands we thought we would never have enjoyed visiting. For me, Francis Bacon’s paintings are such a discovery, for example. Profoundly unpleasant, but full of a meaning that oozes out if you want it or not. One can never decide beforehand if the artist’s trial is going to be artistic or not, because artists constantly reshape the boundaries of what we call art. Art has to be given the credit for trial and error. But in the case of MF Husain’s work, I can see no real innovation, no shocking originality, no creative dimension. Apart from the photography (which is superb, but self-sufficient), there is almost nothing but a succession of self-satisfied allusiveness, or cheap and disconnected advertisement-quality puffed-up odds and ends. Well, now that I’ve poured out my spite, I’ll finish by evoking some of the pleasant things which I found in Husain’s film… There are some rather beautiful symbolical “inventions”, such as the use of these rotund pots seen rolling down the sand dunes, or when Meenaxi is lying on the edge of a pool, we can see them bobbing away on the water. Then there’s these shots of Prague, seen from unusual angles, or bathed in a variety of lights – that’s it, Husain ought to have been someone’s director of photography! That’s where his talents lie.  One last thing: the music by AR Rahman – I knew all of it through other means before watching the movie, proof of its quality and of Rahman’s reputation! But unfortunately good music doesn’t help a bad movie.