Thanks to Ashok I have been fortunate to discover the treasure trove of these Old Indian photos, where much more than what will be discussed here is to be found: it’s a real Ali Baba’s Cave. But going through some of its riches, I stopped at these pics because they seemed to say so much about a certain Bollywood style of relationships back in the 1950s. My first reaction was perhaps slightly on the sleazy side (like what this person says at Bollywood Life, when she describes the “murky side of casting couch”…), but I have taken a good look and I find the pics much less offensive than instructive. You judge!

These pics (here’s the lot) are said to have been taken in 1951 by photographer James Burke for Life Magazine, and show director Abdur_Rashid_Kardar of Kardar Productions, director of Shahjehan (1946), Dillagi (1949) for which we see a poster on the photos, Dulari (1949), Dil Diya Dard Liya (1966), as he’s auditioning two young women. One of them is of Indian extraction, and the other perhaps of European origin. Here’s what AR Kardar’s daughter has to say (link) about her father’s work: “Kardar Studios was one of the best equipped studios in those days and the first to have air-conditioned make up rooms. He was an artist-director, and made all his films with almost German precision. He was very precise and knew exactly what he wanted out of the artistes and how to get it out of them. Movies in those days were completed in 2 or 3 months, as there was no question of stars reporting late for work, etc.” Indeed there seems to be a lot of rigour and business-like efficiency in the auditioning, which of course could well have been slightly staged-up for the purpose of the photography session. Still, there’s probably enough we can say even on the basis of a collection of consciously observed professionals. For example, one can safely say that with 25 or so photos, enough were taken without the subjects checking themselves all the time, for example below when Kardar’s assistant (or could he be the film’s producer?) is looking at the lower part of the girl’s swimsuit, he’s probably temporarily forgotten he was being photographed, because we can see Kardar speaking to the girl, but all his assistant has to do is have a good look at the girl, his eyes being unused for relational interaction! In fact on the website, the photos seem to have been jumbled and I think there must have been originally some sort of an order of appearance, perhaps one girl entered the office, and suffered the gaze of the two men, and then the other, and finally both girls together: 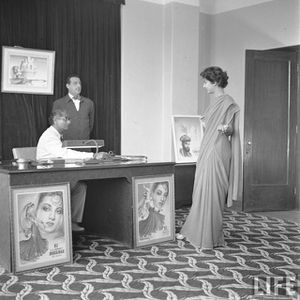 Then we have the photos of the various poses taken while either one or the other of the girls, or both, were in front of men.  And I think it’s possible to reconstruct a 14-picture sequence focussing on the darker girl:

Even if this is only hypothesis, it’s a plausible sequence, and I would like to focus on some of the details while this undressing was going on. In photo n°1, the girl has just opened the door, she’s smiling broadly to charm the two curious gentlemen who are facing the newcomer. Perhaps she’s also trying to put on her best looks for the photographer! Kardar is matter-of-factly holding his cigarette, while the other guy’s got his arms folded, so much as to say: “come in, we won’t harm you!” The best proof of this is picture 2, where Kardar comes closer to his co-worker, and, still facing the girl, but from behind the desk which is protecting her somewhat, he lays his hand on his pal’s back, as if to reassure the girl that even if he has a dark suit, he’s still very tame…

The next photo should be n°3, because Kardar is now behind the girl, who can sense his presence behind her, and is standing rather awkwardly straight, as if she knew she’s observed and critically looked at. In the 4th, the director has moved on the other side, and the girl is caught between the awe-inspiring desk where the other dark-suited man is evaluating her benevolently, and Kardar himself. She looks away, perhaps trying to remain poised, intently focussing on what the boss is saying. On a very similar picture (5), the men are practically in the same positions and have the same expressions on their faces. Only the girl has changed her expression: she’s now smiling, but rather artificially, as if she was expected to do so because of some remark from Kardar which she might have interpreted as flattering, but in a general way. Anyway she keeps her gaze away, as if to say: “yes, that’s right”, but not wanting to equate her private person to Kardar’s remarks. We are now at n° 6, and the boss is really taking the lead, perhaps wanting to break the ice with the model, who’s listening politely, her arms behind her back (maybe her sister’s outside in the lobby, and she’s thinking about what she told her in terms of posture before being called in!) Both know the next step will be for her to undress, and he doesn’t want her to feel ill at ease. Anyway, this is the moment she’s been waiting for, she’s facing the big man, and wow, his glasses are impressive! What an elegant white suit, too! And his neatly combed back hair, very classy, for sure. Note how he’s found his natural comfort-zone position: he’s reclining slightly against the desk, whereas she has to stand, her sandal a little out for reassurance, and perhaps a little unsettled by his having put himself at her level. One word at this juncture on the posters: they clearly belong to the magic sphere where the men move, i.e., around the altar-like desk, whereas the girls pass a little away from it, because they haven’t yet the stature of goddesses. They probably never will, anyway, as this is clearly only a walk-on audition, but the posters are there nevertheless to make the difference between the two worlds of aspiring mortals, and professional creators. Okay, so here goes, Number 7, the girl has acquiesced to Kardarji’s demand (BTW which expression would he use?! “Well, now you know we ask the models to present themselves in swimsuit attire”??) and she’s busy undoing her sari’s folds. The assistant is pretending not to be interested and deflects the attention away from him by busying himself with something on the desk. The girl’s legs are the centre of photo n°8, but still the director is very poised, he’s only bent his head forward slightly, perhaps to accompany the girl’s symmetrical downward bend as she checks that the sari’s no longer in the way. I must say that it’s difficult to detect any unprofessional attitude on his part. Of course, the two smartly dressed men are in front of a undressing woman, but it seems to me the concentration, if palpable, is clearly dominated by a cool matter-of-factness. So much for the “murky side of couch-casting”. In N°9, the same impression prevails: the girl is standing upright, her hands behind her neck to undo her shirt button; some remark from the boss has made his assistant smile. She looks perfectly at ease, clearly used to this type of exercise. It’s fun to see that her legs and feet are in exactly the same position as when she was wearing the sari! N°10 above shows the moment when the girls takes off her top, and Kardar (still very professionally relaxed), is observing the undressing critically, probably with an eye for the type of physique he needs for his film. The girl is looking down, and the assistant, away. Everything here testifies to the perfect professional dimension of the moment. At the back, the assistant is folding arms, straightening himself to find the best angle, and most of all adopting the business-looking pose which says: we’re doing important work here, there isn’t any ambiguity whatsoever. One does feel a slight embarrassment on his face, but it might also be nothing more than the photo having taken an unfinished expression. N°11 is very nice (below): all the preparations are now over, and the desired result has been reached: the girl is standing as they wanted her to be, in front of them, the slightly embarrassing intermediary stages have been successfully gone through, and everybody is relaxing. The classic composition of the photo must have satisfied the photograph, who perhaps has just told them to stay like that a while, which has made them laugh: at any rate the assistant is very pleased to be able to sit, like his boss and enjoy the particularity of the hard work they’re doing! About what exactly is happening in n°12 is anyone’s guess. Maybe Kardar is indicating where some accessory will be placed in the piece in which the girl is to dance? She’s very obediently, very confidently accepting the closeness of his hand, a sign that he’s gained her trust from the beginning. In this photo and the following two, as the girl is dressing again, what is interesting to see is that the assistant has completely ceased smiling: obviously for him the fun is over. The same for us!

So all in all a very touching little collection, wouldn’t you say?