Sagar Sarhadi has only directed one movie, and otherwise is known for having worked as Yash Chopra’s screenplay writer. This movie, Bazaar, (1982) supposedly belongs to “New Indian Cinema”, and it feels like it wanted to belong. It isn’t a bad film, but its defects show rather too much. Still, let’s say it has enough interest to be watched. Its quality comes from its story, and the interaction of complex character roles. Najma (Smita Patil) belongs to an impoverished Nawab family from Hyderabad who expects a lot from her in terms of social advancement, and so she cannot answer Salim’s (Naseeruddin Shah) advances on the grounds that the man, a poet, is too poor. One day her mother asks her to accept the offers from men who will sustain the family in exchange. We see her refuse first, but then accept, and live with a guy called Akhtar (Bharat Kapoor), who in fact does care for her, and proposes to her. She decides to flee her country life and go to Bombay with him. There she meets with Akhtar’s wealthy mentor, Shakir Ali Khan, who seeing his young friend with a stable woman, gets it in his mind to find a wife too, and asks Akhtar to help him. Akhtar asks Najma, who knows back home a matchmaker able to find a girl for him. She is all the more “interested” in procuring the old scoundrel a wife as he has put his condition: Akhtar will only continue to benefit from his largesse is he complies. And Najma’s wedding to Akhtar depends on Akhtar’s revenues… So there we go, on the train back to Hyderabad, and with Salim, because (and this is one of the film’s strengths, this relationship with Salim) even if Najma officially is Akhtar’s girl, she still feels attracted to Salim. There a very unambiguous scene where she dances while he, perhaps half-drunk, is watching her. She looks at him in a serious, erotically loaded way which almost is almost shocking. So she asks him to come along, and the other men joke it off: she has her poet lover at her side. Meanwhile, another story unfolds in Hyderabad: two young lovers meet and court, Sajid (Farook Sheik) and Shabnam (Suprya Pathak). Sajju is Najma’s brother, and has repeatedly written to her while she was away in Bombay, to ask her to come back. All this is very sweet and romantic. But when the wife-searching party arrives in Hyderabad, drama unfolds. At a singing party, the lion-like Shakil is charmed by Shabnam’s youthful presence, and wants her. Najma arranges the wedding, ignoring the ties that exist between her and her brother. A hefty financial settlement is made. Najma learns too late she has been instrumental in her brother’s downfall. She tries to plead, but it’s too late, the pledges have been made. Salim tries to help too, in a pathetic way of his own, incurring Shakil’s wrath. But this one will finally crush Sajju, and cause Shabnam’s suicide on her wedding day. The movie’s strength lies in its unusual combination of relationships, with Najma and Salim on the one hand, and Akhtar, Najma and Shakil on the other. This double trio provides and interesting insight into the roles of men and women in middle-class family relationships. Najma’s character is struggling to find meaning within the two jaws of a vice that crushes her: her own family’s dependence on the ageless practice of using female flesh at the best possible price, and the necessity of securing a husband who will give her a form a social recognition without which she is doomed. The compromises she accepts to make to reach her goal, and the agonized moments which she goes through in order to fulfil her needs, all this creates the film’s tension and composes a realistic picture of women’s plight. Her ordeal is made all the more poignant because it is followed by Salim, the poet, whose powerlessness mirrors her. She's manipulated, but so is he, and he drifts alongside her, vaguely hoping for some change in her prospects, offering his pathetic help, and even growing in stature as the others descend to their abominable level. He at least remains pure, as it were. His revolt against the system, the “bazaar” where women are bought and sold, has at least the quality of truth and faithfulness, even if it lacks all decisiveness. He isn’t even the one that gets beaten (that’s reserved for Sajid, the dispossessed Romeo), and so he becomes the sad clown, the wistful jester who, because he’s harmless, is able to address the great and the powerful and tell them their truths. He wins in the end, sort of, but only because death deprives the real winner from his prey.

One little remark about the theme of the price of human beings. We share today a general understanding that human life cannot be tied to a price, and the very idea of buying or selling a person of whatever sex, age or condition is morally condemnable. It’s slavery, in fact. Slaves used to have a market value, depending on their physical condition, their sex, their age, etc. And just like animals, they belonged to a master. Now the historical revolution that led to the abolition of slavery is very recent, and one shouldn’t be overly surprised if places on Earth still haven’t ratified what they voted for. But in itself, the idea of slavery has sounded normal to men for thousands of years. There seemed to be nothing wrong in estimating the work value or wife-value of men and women. And such views as St Paul’s in Galatians 3,28 (“There is neither Jew nor Greek, slave nor free, male nor female, for you are all one in Christ Jesus”) must have sounded very strange at the time it was worded. The Western world needed 18 centuries of wars and strife before they decided to abolish slavery; it is perhaps normal that places like India will need a little more time yet. But back to the film. Najma has the delicate role of the young matchmaker, and her balancing act,(picture on the right), by which I mean her compromising with violence and theft has a tragic value. Having been wronged by her relatives, she rebels, and leaves home, but she finds herself the victim of greater interests than those she fled. She left a prison only to fall into another, where her movements are observed and calculated. She is obliged to procure to the lust of men that she had tried to escape from. And what is both sad and beautiful at the same time is that the man she loves (Akhtar) is also trapped. He’s her caretaker, her saviour, but also her master and manipulator. Akhtar cannot escape, any more than she can, from the maze of this bazaar. In order to retain some self-esteem, he has to side with Shakil, and he has to betray his girl. His guilt looks like that of Najma, which looks like her mother’s. Almost everybody is guilty, except Salim, who, elf-like, hovers over them all without being able to stop the disaster. Well, of course, the two young victims aren’t guilty of anything, poor ones, but they’re only there to contrast their innocence with the dark forces that will use them so they can be unmasked. 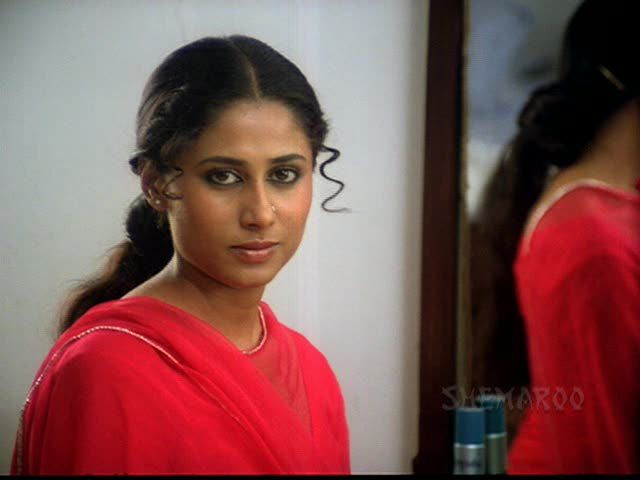 Najma’s fix is beautifully portrayed thanks to Smita Patil’s acting and striking presence. She lends her sensuousness, her Mona Lisa beauty (that photo above, a strikingly gratuitous shot at the beginning of the film) to the role, and one is carried away by her simple and assured personification. Everything is played inside, in her half-childlike (but also very feminine?) desire to defend her future hopes as a married woman, her self-respect, her dignity, and at the same time one feels she has tasted the forbidden fruit, and can no longer completely decide what is right or wrong. Her destiny has been played, the choices she has made, along with the social determinism that has shaped her: all this creates a vulnerable, touching woman that needs more than she will ever get, and is doomed to be seared by a fire she has both willingly and unwillingly lit. The last picture of the movie, that shows both her face and Salim’s full front, and in which she admits her responsibility, sums it up: the drama which the movie denounces is not outside its victims; they have a played a role in it as well, and nothing can now change that. Has the film’s generous denunciation of Indian abuse of women been of any historical efficiency? Somebody else than me would have to answer, but certainly such situations have existed before and will continue after it, and many more generations of love-breakers and woman-buyers will wreak their havoc before women can be free in provincial India.

Sen has a good review of the movie here. Also you can check Chadrank at Bollywhat, who explains the importance of the ghazals in the movie. And Harmanjit has written a strangely moralizing review here, which is nevertheless worth reading!