(Could this be this what happened to the great RK???)

For Raj Kapoor the director, Bobby appeared in 1973 between   Mera naam joker (1972) and Satyam shivam sundaram (1978) and so I was rather interested to have a look at it in order to bridge that gap. Well, even if I’m told the movie heralded RK’s conversion to masala, and that he needed Bobby to make up for the box-office disaster of MNJ, there is still a gap, and the two very personal, even shockingly original landmarks of 72 and 78 tower high above it. What’s striking is how so many of Rajkapooresque resources were present, which could have given depth and meaning to the movie, but went unused. It’s as if RK hadn’t been able to suppress them totally from his script and yet was forced by the knowledge that this type of cinema was now gone, to refrain from using them, and had to satisfy himself with standard recipes that a general public would appreciate and pay for.

For example, there’s this Shree 420-like scene when school leaving Raja (later called Raju, as in the movies from 1950s) dramatically denies any intention of lying in order to move ahead in life, contrary to what his looser-morals friend suggests: The risk of lying is repeated later a few times: Now for a younger Raj Kapoor, such a line would have been seized as a warning, or an ironic comment of some downfall or doom to come, because youthful ideals can never match the moral complexities of real life. But in Bobby, nothing is made of it. Raja will never lie, or even face the aforesaid complexities. His “honesty” doesn’t make him more elevated or hero-like, it just makes him more Bollywood. So that the insistence on truthfulness in Bobby serves almost no purpose apart from weakly putting forward the necessity for love to be guileless, something masala spectators take for granted.

Another example of Raj Kapoor’s past glory occurs during the song Aye Phansa, which takes place at the moment when Raja’s parents, having decided to terminate any fanciful risk of a mismatch between their son and his girlfriend Bobby, organise a party to make him meet his prospective wife, a dimwit girl who belongs to his social milieu, and who is (like him) the sole heir to a millionaire friend of his millionaire daddy: 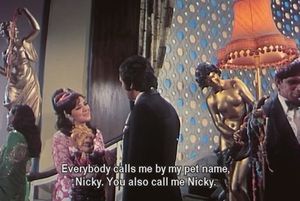 During this song, Neena sings. She’s been Raja’s admirer from the start, and reminds one of Maya in Shree 420: 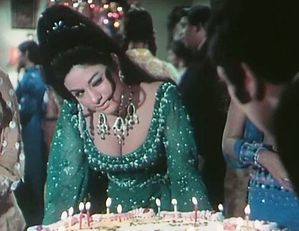 as if to say: "hey you spectators, you know you aren’t really seeing what’s on the screen, you know there’s more to Raj Kapoor than this glamourous Bollywoodisation of human feelings?" But I’m afraid this interpretation isn’t actually meant; the threat of evil lurking behind Neena’s erotically charged cynicism never materializes, and never reaches the "Angry Young Man" (this is 1973...) standing in front of him in the glory of his self-assured conceit. Raj Kapoor even adds a reference to the depths of chaos and madness, such as was so poignantly present and menacing in Awaara: First we have the masks, so disturbingly void of any human resemblance (but the frightful effect tempered by almost touristic colours): and then, more nightmarish, their contamination on real people: Neena herself sings about the destruction which, at that moment, might have invaded Raja’s world (and the spectator’s comfortable movie experience): and the fateful word which she playfully repeats, like a mantra: “trapped!” made me think: at last, I’ve found my old Raj Kapoor again! At least, there’ll be some depth, some risk, some vulnerability in this shallow Raja! But alas, none of this happens. Raja escapes the party on his motorcycle and, his scarf unruffled by the distance, arrives at his beloved Bobby’s mansion in Goa, only to start another heroic stint (I was going to say – stunt) before he victoriously wins her back at the end. As Satyam suggests, there’s a certain amount of DDLJ here! Isn’t there a moment in DDLJ when the eloping pair find themselves in need for breakfast?! There is another moment in the film when the intensification of mad noise and lights seem ready to threaten the flat sanity of the masala bipolarity. It’s when Raja takes his Bobby to Neena’s party, and when she gets molested by some thug-like guys there. Just before the moment I’m thinking of, the flirting bully had taken her upstairs to watch Raja being embraced by his ever amorous Neena and crooning down his neck these words: 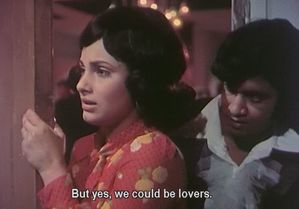 (Notice how Bobby's neck is protected by her bobbing hair)

Hearing this and rightly shocked, Bobby runs down and then it happens, the unsettling of our senses and moral landmarks is made visible through a party that veers to the wild for a few moments: 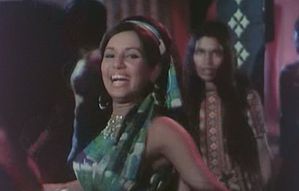 In Raj Kapoor’s poetic world, the balance of common sense and sound judgement is often imperilled by passion and folly, and this is represented on screen by creatures who come out of either nightmares or legend, such as were told us at night when we were children. The risk of destruction and upheaval has a social, and even a political dimension. The forces of the underworld are always there lurking, and ready to overturn the rational and sensible order. An order which the average escapist spectator doesn’t want to see disturbed, perhaps because life is already unstable as it is, but also perhaps because he is afraid of a life he doesn’t want to know, where logical meaning doesn’t function any more. Such a risk is explored in Shree 420, Awaara and Jagte raho (even if the last film wasn’t shot by RK himself). But here in Bobby, these trappings are merely tricks to make the spectator enjoy himself and relish the show. He knows nothing can happen to the heroes, and most of all, he knows the film-maker isn’t out to unsettle him, or question his morals: he needs his money and renewed trust too much. One half wishes Nargis would come back and shout out at him: But what could even she do against the forces of destiny?

For Raj Kapoor in 1973, destiny has a name: Dimple Kapadia. I’m told simple Dimple reminded RK of his nafis Nargis: fine then, because well otherwise, she was sooo young! But apart from these arguments: what could she put forward? This? No, there definitely had to be some autobiographical element, and in fact Rishi provides it, in the bonus “Rishi Kapoor reminisces” (on the DVD, or perhaps it’s somewhere on the net), (Ah, those were the days of youth)

where he says that moment when cute Dimple is brushing her hair with a hand full of dough while speaking to a bemused Raja, was exactly what had happened to RK meeting Nargis for the first time. Okay, so the equation Dimple = Nargis would be the sublayer of meaning to Bobby!! Hum. Otherwise, I found young Rishi Kapoor fairly okay, that is, apart from some gaga seventyisms, among which the proud looks wearing these: (All the better to see you with my dear)

Then you have some crazy picturisations, which click perfectly in with RK’s “masala conversion”: And the absolute steamy moment 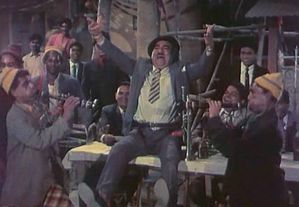 And I could finish on this nice and naïve pic, when the dono are “trapped” inside the cottage where so much is awaiting them…: So that indeed, all one could say is that with Bobby, RK managed to make a visually lavish show, with lots to look at, but alas, as he might put it: (1) (Rishi tells in his "reminiscing" that Dimple, at the moment of the film, was pregnant with Twinkle Khanna...)