In Chhalia (Manmohan Desai, 1960), we have another of Raj Kapoor’s avatars: his character personifies a “chhaliya”, translated by Philip as a cheat, or artful deceiver, but who in fact doesn’t deceive anyone, and I wonder whether we shouldn’t say “cunning middleman”. In the story, indeed, Chhalia intervenes to restore the broken bond between Rama and Sita, or at least their earthly representatives, Kewal (played by Rehman) and Shanti (Nutan). These two, here in the context of the Indo-Pakistani Partition period, are husband and wife, but they have been separated by the events, and as the film starts, we follow Shanti arriving in India, after an absence of 5 years. We learn through flashbacks that she has known her husband only one month in Lahore, that he has fled to India and that she has been looked after by, a “Pathan” or Afghan soldier called Abdul Rehman who has vowed to protect her in order to compensate spiritually for his own sister in India. The story makes it quite clear that he hasn’t even looked at her, so that her honour is intact. He’s the Ravana-figure who in spite of its violence also comprehends an ascetic ideal which the promotion of Rama in Bollywood has sometimes forgotten. Chhalia intervenes when Shanti – Sita like - has been rebuked by both her family and her husband, who both had come to meet her at her arrival in the refugee location in Delhi. Her father considers she is now a stain on the family (probably because she’s stayed so long in Pakistan, land of the Ravana-like Muslim arch enemy) and refuses to acknowledge her as his daughter; and her husband, who had wanted to welcome her back (and had parted with his family for her) now shuns her because the 5 year old son she bore him is called by an Islamic name (Anwar) and says his father is “Abdul Rehman”. But nothing Shanti can say softens the outraged Kewal-Rama! Chhalia saves the desperate young woman from committing suicide, brings her to his shack where she recovers somewhat, especially when she realises that her son has been admitted in the school where her husband, whom she hopes to reunite with some day, is a teacher. What happens next is Chhalia struggling to express his love for Shanti and at the same time being forced to hide it, perhaps at first because he feels it isn’t requited, and later when she tells him she’s faithful to her husband’s love, he recognises he had been foolish. And because she’s called Shanti (peace), the political allegory is clear: continuing rivalry and enmity are wrong between the two countries who should be united like husband and wife. So it’s a surprise when Abdul Rehman, the grave Pathan, arrives on the scene, and tries to settle an unexplained feud with Chhalia. But the latter represents India, which is perhaps the real cheat, politically speaking. So their fight must represent the war between the two cross-border foes. And of course it is Shanti who stops the fight. Rehman recognises her voice from when she used to stay with him, and abandons his futile warring. He goes back, and meets with his lost sister on the train. So his sheltering of Shanti during the five years when she was in Pakistan finds its reward. Chhalia now understands his mission. Forgetting his selfish love, he now does everything he can to reunite the wronged Sita to her Rama, who is still brooding about his cheated situation. The first thing he does is make Kewal-Rama accept his son, who figuratively means the fruit of peace. He goes to Kewal’s dwelling, and confronts him with his boy. And when Kewal rebuffs him saying he doesn’t have any proof of his fatherhood, Chhalia cleverly challenges this misplaced appeal for proof: Man cannot prove much, says Chhalia (who could be Manmohan Desai’s mouthpiece here), and the more he tries to reduce human relationships, which must at all cost be based on trust, to a proof-based contract, he destroys the necessary bond of confidence between men. The lesson of Rama accepting Sita back after her trial of fire (note the choice of this version of the Ramayana, as opposed to the one in which Sita isn’t trusted and not reunited with her husband) corresponds to India accepting Pakistan after the ordeal of war, and basing the new political reality on the fruits of peace. 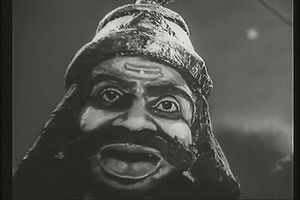 The film’s climax is the moment when Chhalia manages to reunite the estranged couple, and this is done thanks to the symbolical burning of the formidable figure of Ravana, and the fright it creates for Sita’s life, as Shanti is narrowly saved from the falling burning effigy. The crowds at the Vijayadashami festival could represent the Indian population agreeing to reinstate peace within its midst. The power of cinema is that of a political utopia: that of proposing a future for the two new neighbours based on peace and enduring trust. A few words about the two main actors; Raj Kapoor does his best to second Nutan, and occasionally reaches moments of convincing characterization, for example during the classic song Dum dum diga diga, where he saunters under the monsoon rain, and playfully dances with the passers-by: But the palm undoubtedly goes to Nutan, who once again carries the movie, not only symbolically as the flag of peace, but professionally. Her acting is flawless, and thanks to her we suffer when she suffers (for example when she’s rejected by her relatives upon arrival in India): we rejoice when she rejoices (the moments when she unwittingly waxes tender with Chhalia): 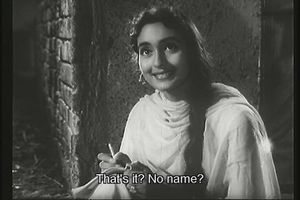 and we hope and dream when she too hopes and dreams (the moment when she’s looking at Kewal taking little Anwar in his arms and in effect adopting him): She’s our interpret, she carries our emotions and expresses them to their realistic maximum. And there are some moments when she has been almost amorously caressed by the camera: When one is familiar with the political and historical level of meaning of her adventure, one cannot refrain from loading everything that happens to her with that meaning, and her story becomes beautiful indeed. In the history of the subcontinent, Peace was indeed first espoused, and then wilfully rejected, before it became once again the object of hope and negotiations. The purpose of peace is also greater than what was historically achieved: peace is always ahead of its limited realizations; it is always greater than the flawed attempts which bipartisan negotiations implement. It acts as a ferment, as an incentive, as a desire which is always working from inside in our efforts towards accomplishment. Nutan was wonderfully chosen for such a mission.