Ashani Sanket, shot by Satyajit Ray in 1973 is again one of those movies people lift to the skies, but for which you have to wonder why what they find so important or interesting in it is so vague and general. Just saying things like “a scathing indictment of the 1943 government-orchestrated famine” doesn’t really underline its artistic value… It’s classified in The New York Times 1000 best films ever, not that that means very much, mind you. Other critics I’ve read here and there contend that Ray’s films are on the whole too slow, and lack “inventive” plots. And even if I’m an admirer of Ray’s works, as you shall see below, I agree with these criticisms. Only for me they aren’t negative. They’re part of Ray’s art. 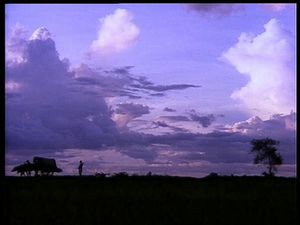 What struck me, in Distant thunder, was what I’d call its emptiness. And yet a lot happens! Judge for yourself: a young couple of childless Brahmins (Gangacharan and his wife Ananga), who arrive in Bengali village as welcome additions to its community, are confronted like everybody else to the 1943 war-caused starvation in which we are told 5 million people died. They don’t farm and therefore depend on others giving them food; and their status indeed helps them to escape the worst. Ananga stays at home while her “Pandit” husband is busy at the school he’s started. He’s also taken up the tasks of village priest and community doctor, and we understand that in fact he’s not quite as erudite as he puts on. But this is never uncovered, except perhaps when, during the rice riot, famished villagers have crowded around a distribution point, lose their patience and grab the food, resulting in the dignified pandit being pushed aside and falling on the ground. We wonder at that moment whether his knowledge is not symbolically being thrown overboard, and if he won’t be exposed as impostor. Ananga befriends some women neighbours, among which Chutki, a spirited survivor of the cholera epidemic which afflicted the region a few years before. She’s the one who defends her Brahmin friend from the assault of a “hungry” unknown man (whose face we don’t see) who takes advantage that she had lagged behind the other women to assault her and try to rape her. But Chutki lets herself “eaten” by another hungry one: a horridly scarred man (a firework blew up in his face) who lives near the brick kiln, outside the village, and who has managed to hoard some rice, which he will give her in exchange for her charms. She accepts, hunger being too strong. Eventually, she will leave her husband, and elope to Calcutta with her “survivor”. Last event which occurs during those harrowing times: the arrival at the Brahmin couple’s house of visitors, first Moti, an untouchable friend of Ananga’s, who will come back at the end, dying, and which they’ll decide to bury, breaching the no-touch code in a surprising gesture of generosity, and then the fellow Brahmin visitor whom they first suspect of parasitism, and send away, but which Ananga asks her husband to call back, and sleeps at their home. Generosity again, that will materialise in his whole family coming to them in the end, thus multiplying their household five times!

But all these events are completely non-spectacular; and belong very much to the course of human realities. One almost might say they’re determined to happen the way they do. Confronted to such plights, the way these people react seems almost predictable: as food becomes scarce, they start fighting for it, their survival instincts become sharper, they develop protectionist attitudes and other forms of deregulated types of behaviour. Things occur which periods of plenty normally prevent, for instance the emotional blackmail that Jadu, the scarred “monster” from the brick kiln tries with Chutki: she’ll have rice if she “comes with him”. All this is seemingly underlined by the views of the eternal, wonderful nature which is filmed by a loving camera: the ducks on the water, the huge trees against the evening sky, the fluttering butterflies delicately poised on the mud. One is irresistibly reminded of Pather panchali and its still life poetic creativity. Ray said that he had wanted to film this luxuriant nature in colours, and not B & W, because he wanted to underline the contrast between what men can do to themselves and how splendid Nature remained all the while.

So this is the “emptiness” which I had alluded to: a smooth, even narration which never surprises or shocks – it would have been so easy to have been violent and graphic, with death and rape on the agenda. Instead, the film unfolds calmly, sensuously, richly evocative of realities which belong to a sort of eternal natural cycle. Even the 1943 famine strikes as part of the normal course of destiny, and a greater frame of harmony and life encircles it all. People have strong feelings: love, ambition, yearning, frustration, anger, and a good deal of hidden intentions show a complexity of relationships which prove we are in the presence of a very real community. But everything is shown from within this emptiness, or perhaps this fullness (it’s the same thing) where one wonders if man is actually free. The miracle is that he is. At several key moments, Ganga and his wife display a generosity and a sense of adaptation to circumstances which make them charter new human grounds. Their sense of solidarity goes far beyond what one would expect of hospitality, even in troubled times. Ananga pleads with her husband to accept the Brahmin beggar at their home in spite of Ganga’s distrust and displeasure. Ganga’s decision to leave aside his ritualistic distance from labour and untouchables is blown to bits when he asks Ananga if she doesn’t mind him burying Moti’s dead body, and of course when Ananga tells him she’s finally pregnant (that glorious, gorgeous face of hers at that moment, see below) contains a confidence and a hope which builds the foundation for the future of humanity. Who said Distant thunder was a pessimistic film? What’s great is that all this happens with only half-virtuous characters. Ananga is flawless, but rather underexploited, but Gangachara (Soumitra Chatterjee, BTW), as we have seen, could almost be an anti-hero. That is where Ray’s art shows itself: these characters represent humanity all the better, and in a mysterious way, I’d say Chutki the murderer and adulteress, Jadu the monster, Biswas (the village elder) and his pathetic attempts to hide his rice: all of them belong to a redeemed humanity, just because they are men and women thrown on the surface of this planet and loved for what they are. What proves this for me is Ray’s particular interest in the sensuality of his world: he starts with the women, of course (that opening scene where Ananga’s hand caresses the water in and out; Chutki’s dazzling red sari, Ananga’s oval head-gear…), but everything else is seen through a creator’s ravished eyes: the rice which Ganga fingers in close-up is mouth-wateringly delicious; the light that covers the village in afternoon gold, the strand of hair on Moti’s dead face, or the burnished bronze of the poor Brahmin’s skin, as he lies on the porch, that night of his retrieved dignity. Even Jadu’s face radiates a sort of charm, when we get used to it: he is no monster, just a frightening appearance. The fact that Satyajit Ray doesn’t use his film to condemn anyone or anything (something which apparently people thought he was doing, precisely, and which explains the film’s bad acclaim in 1973) turns it into a meditative portrait of a tolerant and benevolent India where men and women do not need to strive hard to become more human: they are redeemed by the compassion of an artist who defends them whatever their failings and limitations. The distant thunder is heard, but protected as they are, they cannot be struck by its lightning.