In Satyajit Ray’s Home and the world (1984), there is a mystery: why does Nikhil (whose name means “free”), the open-minded husband who wants his wife to espouse modern ideas and leave the traditional confinement of the home (the Purdah), let her see his friend and soon rival Sandip: doesn’t he have eyes? Doesn’t he know that his lovely and inexperienced wife is falling in love with this manly orator and activist? Does he harbour some perverse intention to watch his wife fall in another man’s arms? And his first move, to let her leave the seclusion of the home, so as to have her confront a “world” which she wasn’t asking to confront, was this wise, was it healthy? His own sister in law, who hovers in her widow's whites through the home, had warned him : The film is an adaptation of Rabindranath Tagore’s novel which apparently contains a number of inconsistent traits, among which an exaggerated opposition between the two main protagonists, Nikhil and Sandip, and even if the film reduces it and makes the contrast less stereotyped, perhaps it also retains some of the original story’s blemishes. The critic in the link above says that in the book, Nikhil is the main character of the story. In the film, the barycentre has shifted: Satyajit Ray has clearly put Bimala, his wife, in the main position. The pretext of the story remains nevertheless the same: to uphold a non-violent, non nationalistic attitude towards future self-rule in Early XXth century India. In the book as in the film, Sandip stands for the nationalistic, the-end-justifies-the-means attitude, whereas Nikhil on the contrary wants to embrace Swadeshi in a way which won’t victimize the minorities. But I think Ray has taken this purpose as a means, and no longer as an end. In 1984, there was no longer any need to insist on self-rule the way Tagore had done back in 1915. At that time a radical approach was understandable, and the poet opposed it on idealistic grounds. That was the reason for writing Ghare-baire. In the novel, Nikhil bore a strong resemblance to Tagore himself, in his apolitical and non-interventionist attitude. And Sandip stood out as the caricature of the Machiavellian activist, ready to sacrifice everything to his cause. But the film treads much more delicately; the balance between the three characters is finely tuned, not unlike what Ray did in Charulata, and Mahanagar, where other women’s discovery of the world also put the age-old equilibrium between man and woman to a dangerous test. Here we have Bimala (facetiously, but also symbolically nicknamed “the queen bee”) taking centre-stage and observed by the director-entomologist. She’s his main experiment. In 1984, what Ray is doing is taking a new look at feminine identity and feminine desire. The eternal triangle is once more at work under his lenses. So what do we have at the beginning? A still rather young couple, but not young to the point that its single-tracked love would exclude other needs for enrichment and modification. A middle-aged intellectual husband has asked his rather reluctant wife to be “educated” by a European lady. She submits, but strangely enough, is ashamed to show him the result of her education (this prepares us for her own anti-colonialism). Then Nikhil decides that she must leave the woman’s seclusion from the home (the purdah) and meet his friend(s) who have been informed of her accomplishments. Of course the couple talks about the proposal, and Nikhil tries to justify it rationally. Then, when Sandip, his friend and Swadeshi activist, comes in the region, he introduces his wife to him, and urges her to take her own stance, assuring her that she needn’t follow his more reserved attitude towards self-rule. In front of Sandip, he declares his wife “free” (like him) of her own thoughts and moves. Thus pricked forward, she declares her opinions, which turn up to be quite in favour of Swadesh. Quite naturally afterwards the path is paved for her to fall into the arms of the boisterous and passionate politician. We will come back to this later, but for the moment we need to finish with the intentions. Because of course Nikhil needs to give an added value to an already much beloved wife. In order to do that, nothing is better than having somebody else value her from his (different) perspective. And isn’t his friend in the best position to gives her this new value? Of course Bimala’s importance increases, and she can only be tempted to go further. Being looked upon from two masculine angles now, she can compare herself from these two angles (hence the importance of mirrors in the film). Before that, she had only Nikhil’s angle, and the uniqueness of this angle was coherent with the sole perspective she used to have. In fact Nikhil has given her in Sandip the possibility to have this other perspective on herself. The man she loves gives her this other access to herself, which becomes a newly beloved self. How can she resist ? And what can her jealous sister in-law do against it? The political sacrifice (ie, side with Sandip and Swadesh for the benefit of the future generations)  justifies her adultery (which can be rationalized as a rejection of the compromise that her husband embodies). So she embraces Nikhil's experiment, but it soon becomes her own trap, because it enables her to test her seductiveness (and its power) on someone else, with what looks like her husband’s acceptance and even interest. 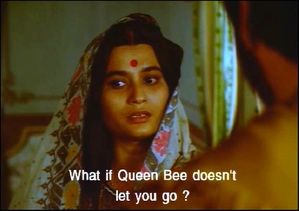 The game is now set for Sandip to enjoy it too. For him it’s an exciting mixture of power and control: what is now open for him to do, and the unknown waiting in store for him. No wonder at some point he exclaims that he can’t believe his eyes: his friend Nikhil has put in front of him an object which offers him a chance to practise his consummate skill, the game of power (with its risks and its uncertain but fascinating possible victory), and at the same time a sensual pleasure which he must have been deprived of for a long time, having been on the road (for his campaigning) for so long. His encircling manoeuvre succeeds beyond hope: the Queen Bee is hopelessly charmed by Prince Sss (for snake). But contrary to Tagore’s novel, Sandip isn’t a brutal boar; his approach is made possible by a fascinating observation of Bimala’s move towards a sin which she understands means her empowerment and at the same time her downfall. So it’s wrong to interpret Sandip’s “defeat” in terms of having got what he wanted (money for his movement, satisfaction for his senses): he leaves because Bimala’s blindness has ceased, and she no longer looks at herself in his mirror (her eyes open when she realizes that Sandip will not abandon his cause for her sake). Having realised the spell under which she had fallen, she can break it, and frees herself from its bond. Does this mean that Nikhil’s experiment has succeeded? Has he succeeded in transforming her into a more beautiful, more feminine, more independent object of desire? Yes he has, but only at a price: his own death, symbolically signifying her total emancipation. In a sense, coming back to her husband meant that he too is now free to choose his own route, and that the cost of her freedom was symbolically the loss of her former marital ties as she knew them. So even if Nikhil’s character often reminds that of the indecisive Hamlet, in fact he does act, but on a lower key. His is the ideologist’s relationship to action: he prefers to follow the shape of reality rather than (like Sandip) bend it to his own will. Satyajit Ray appears a master of colours in Home and the world. Black and white would certainly have enabled him to use contrasts and opposition, but that being impossible at the time, for commercial reasons probably (if he even thought of the idea), he uses reds, purples, blues and whites to the full, manipulating their symbolical value, to express desire, guilt, pain, anger, distance (viz that blue night scene when Nikhil joins Bimala on the terrace outside, and she flashes her lover’s contempt at him!). The variation in colours and lightings makes up for an otherwise rather static setting.