Yash Chopra’s “Kabhie kabhie” (1976) was for me like a distant reference, a movie many people had seen and loved back in the exotic seventies, and so, I knew I would have to see it one day. And now that I have, and have both enjoyed it and been disappointed by it, it’s funny because it’s like a ball pushed under water: it surfaces again; it has a buoyancy which testifies to its value in spite of all the mistakes and defects it contains.

Its story is the first thing that shows that ambivalent quality: it’s both psychologically interesting and clumsily patched up, almost too complicated, and yet lifelike. Amit (Amitabh) the poet falls in love with Pooja (Rakhee Gulzar) who loves poetry and the poet. But their parents have other plans, as usual, and they submit to their fate: we are not yet in the 1990s! Pooja starts her married life with Vijay (Shashi Kapoor) and Amit with Anjali (Waheeda Rehman). But the past is kept quietly secret by the two lovers. On top of that, Anjali had a daughter before getting married to Amit, who doesn’t know it. We are introduced to her life with her foster-parents. She’s called Pinky (Neetu Singh) who will soon meet up with Vicky (Rishi Kapoor), Pooja and Vijay’s son. The wedding is announced, and on account of it, Pinky’s foster parents believe they have to tell her about her past, that she isn’t really their daughter. She cannot, they think, begin her married life on a secret. But this revelation will trigger a reaction which will catapult the past into the present. Pinky flees her home to go and meet her unknown mother, leaving everyone in a crisis. The fact that this rather old-looking teenager decides to reject the loving relationship which the story has painstakingly (but lamely) tried to establish (there is some absurd frolicking between herself and her parents, which is REALLY hard to watch) would be contradiction enough if the film wasn’t exploring the idea of filial love and what makes people recognize their parents as such. Pinky’s reaction to the revelation that she isn’t who she thought she was, might be “silly” from a post-modern point of view where genetics don’t matter as much as the people themselves who have adopted you; but she shows that this question of one’s origin is a deeply set one, and that the debate as what is the most important, nature or culture within us, isn’t as easily decided. When Vicky scolds Pinky for being selfish and risking the balance of Amit’s household with her absurd quest, he hasn’t understood this legitimate need for biological roots. In France, the law favours biological descent in cases of doubtful parenthood, and I think this is a reflection of this reality, even if the rights of adoptive parenthood might seem greater in terms of relational investment. What’s interesting is that the quest for the origins brings about the other problem that the film deals with: how and to what extent our past is still present in our lives (Yash Chopra will again develop this theme in Silsila). That is the main subject of the movie: our intimate relationships as mature beings are often shaped by wishes or regrets which played long before, and which adulthood has not managed to sort out. One major illusion we have is that maturity and adulthood should integrate and neglect what have only been the passing desires of youth. Indeed an adult is considered to be such inasmuch as he or she has reached a balance which puts into rightful perspective the desires of young age. Psychoanalysis tells us so, up to a certain extent. But it also tells us that a certain labour might be needed before we reach that stage, and we often meet mature men and women who clearly have not reached it, and behave as if they were re-living (or transposing) the unsolved conflicts and contradictions for which they have not been able to find a solution later in life. 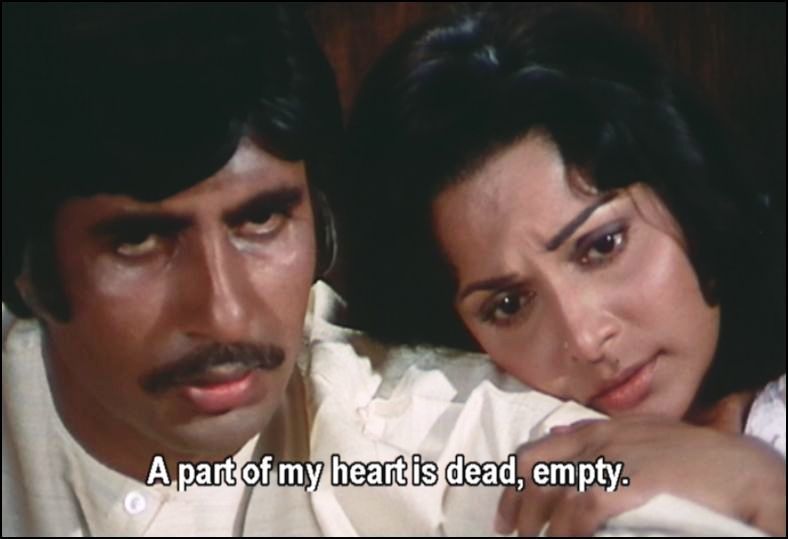 Of course the film contains the standard criticism of the Indian practise of arranged marriages, but it contains it only as an aside: it clearly isn’t the main subject. Even if indeed Amit and Pooja should have been given the right to live together as married man and wife, because love once born between man and woman cannot be suppressed by social decisions, what Yash Chopra is doing in Kabhie Kabhie goes further. After all, he shows that the human mind is much more flexible and malleable than cheap romancing would have it: Vijay and Pooja make a good couple, who in spite of Pooja’s secret, build a relationship which is not only cemented by the existence of their son Vicky, but by true love and an acceptance of time’s decrees which isn’t far from wisdom. And the same goes for Amit and Anjali, even though their union was sitting on the time-bomb of Pinky’s hidden existence and Amit’s romantic wounds. 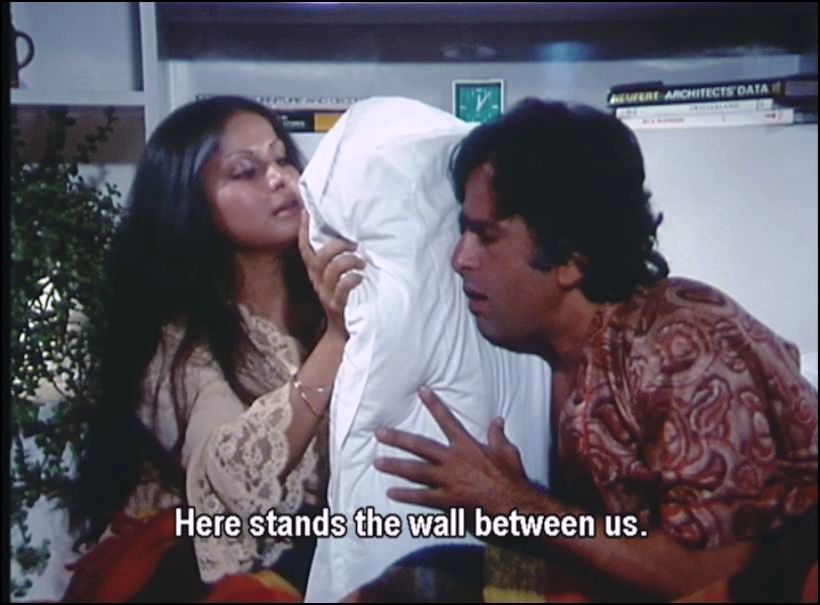 I think what has interested Yash Chopra is not only to provide his audience with the entertainment of love, even if clearly the film has that aspect. But it also tackles the serious issue of maturity, ie, the responsible management of one’s emotional life. This refers to who we are now, but also to who we have been, and the balancing act of both.  We are not the makers of our fate, of course; what happens to us is partly chance, partly determination (time and space, but also family, society, and country all intervene). Nevertheless, we do have a role, and what we say or hush, for example, is our doing. Now, revealing our failures to others isn’t always positive, in spite of what a certain naive vision of the intrinsic value of truth suggests. Sometimes there’s sound reason to keep things unknown. The past is past. Which means, it is no more. Forgetfulness is often legitimate. I think the film shows that it would perhaps have been better if Pinky had not been told about her real mother; or at any rate her reaction shows that she either should have been told much earlier, or not told at all. But the film also shows that a past whose status has not been settled remains present and that the more it is denied its presence, the more it will grow out of proportions, compared to what it once was. Anjali was wrong to have hidden the existence of her first daughter to her husband, or rather the society which imposed on her the need to hide this as a sin is wrong. But perhaps Amit was right to feel he had been cheated of his love with Pooja, and perhaps it wasn’t really Anjali’s business to inquire into what could have remained a slowly receding pain? A secret must sometimes remain secret if it hurts too much to be known and thrown in the face of the reconstructed person who has had to rebuild himself as an adult. And it is the responsibility of the secret holder to judge whether the truth is better than the ignorance.

The film has often been recognised as more than imperfect, with editing mistakes, psychological blunders and a ridiculous happy end. Evidently Yash Chopra hasn’t given it the attention he gave to Deewar or Darr, for example. But, even if this is a pity (for a work of art is a whole), it doesn’t take away the interest of the theme, nor does one easily forget the actors’ roles. Amitabh didn’t seem very inspired, it seemed to me, but Shashi Kapoor does a fine job, and so does Rakhee Gulzar, already seen in Kaala Patthar; Neetu Singh and Rishi Kapoor I found quite allright as well. The music is recognised to be memorable, sung by Mukesh and Lata Mangeshkar, of course. If you are interested, Beth has a nice perspective on the Chopra-ness of the film, and there is a good review here, but it’s in French.