I owe Sharmi an IOU because she’s the lover of “threadbare movies” who watched and beautifully reviewed Satyajit Ray’s Kanchanjangha (1962) on her blog and made me want to watch it! Well, everybody whose review I read (check here and here) calls it a great cinematographic experience, some because of the fact that the film’s story wonderfully fits in the time it takes to be seen, some others because the characters (especially Chhabi Biswas) are so good, others again for…other reasons, but all seem in fact rather puzzling. They do appreciate the movie, that’s for sure, but then why can’t they pinpoint a striking, convincing reason? It’s almost as if they the film’s good on the sole basis that it’s by Satyajit Ray! First a quick summary of the story if you haven’t seen it. It deals with a well to-do family of five on their last day in Darjeeling: Industrialist Indranath Chowdury, his wife Labanya, their two daughters, younger Monisha (courted by a smart and promising M. Bannerjee) and older Amina, who’s married to dissatisfied Shankar, and with him has a child, little Tuklu; and then there’s Anil who takes advantage of the stay to try his luck at chatting up lady-tourists. On the scene, there’s also Jaganath, Indranath’s brother in law, a widower, and finally young Ashok, who’s introduced to the family by his mentor, who once was Anil’s tutor. and who, upon spotting Indranath, he believes he can secure a job for his charge. The five members of the Chowdury clan are all pursuing something, it seems, or hiding something. Anil is pretending to be jolly in front of his prospective lady-friends, but as soon as they’re out of sight, he’s glum and full of spite. His sister Amina (above), a fine looking woman, hides an affair with a lover she believes her husband knows nothing about, and has to go out in order to read his letters. Her young sister Moni is labouring to elude the insisting courtship of her parents’ approved suitor, and is apparently waiting for something to free her from the trap prepared for her. Their mother, a rather forlorn and brooding lady is clearly hiding her own secret opinions, less because we don’t know them but because they run against those of her husband, formidable Indranath Chowdury. And so, what about him? Is he hiding something too? The whole film takes place in the late afternoon of the last day of their stay, and we are, like them, plunged in a state of expectancy, even suspense. What for? For the lifting of the mists which are hiding mount Kangchenjunga, India’s highest range and peak, which, as all visitors to Darjeeling know, forms the crowning glory of the resort. But today there are mists, and nothing can be seen, as Indranath tells a fellow visitor at the beginning. So all the events in the family will occur against the background of this potential revelation, when Kanchanjungha will at last reveal its splendour in the skies. Because of this long waiting, everything takes on a note of unfinished business which only the uncovering of the beautiful sight will be able to appease. So revelation is the key word here: revelation is what happens when the veils (the mists) are lifted, when reality or truth appears from behind appearances, when nothing is hidden any more. Revelation is what will happen at the end of the day, when all the protagonists’ stories are unravelled. 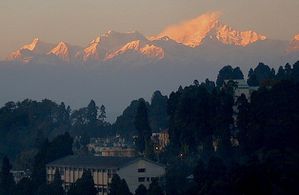 Which revelation happens in the story, apart from that of the mountain? First, Kanchanjungha’s apparition at the very end symbolizes the family itself (its name means “the five treasures of snows”: ie, each member will discover their own treasure, up there in the snows), a family who has gotten rid of their pretences and self-screening illusions. Anil must face the fact he isn’t going to succeed with women (and in life) by pretending to be somebody he isn’t. Monisha, thanks to Ashok (it’d be wonderful if his name could somehow be associated with the winds chasing the clouds!), will get rid of her half-truths concerning who she has to marry and obey; Amina of course manages to find the strength to give up her old love “which doesn’t represent anything any more”, and face the truth of her life with Shankar, in spite of his shortcomings. Both their lives had been based on hypocrisy and pretence, so now things can perhaps move forward really. Labanya (the mother), after a moment of solitary meditation but also with the help of her brother in law, finally finds her own solid core when she realises she must support her daughter’s choice of a partner, and so she now has the strength of spirit to confront her husband. And Indranath also finds his truth, which takes the shape of a young man’s refusal of his advice and help, contrary to everything he had so far assumed belonged to himself in terms of values and merit. Because Ashok refuses to accept Indranath’s offer of a job, and seems to relish in the freedom such a refusal has given him, old Indranath learns the sobering lesson of his own limits. He is suddenly turned into nothing more than the old man he has become, with his outdated aristocratic pride and obsolete colonialist opinions, not unlike the ageing zamindar played by the same Chhabi Biswas in Jalsaghar. This is what his respectable-looking pater familias figure was hiding: a shameful allegiance to a collaborationist past glory which modern India has to learn to shake off, in order to reach maturity “through [its] own efforts”, as Ashok says to Indranath before laughing at him. Real independence is at that price. The price that Ghandhi’s satyagraha paid, and which many still find too costly and too demanding even today. In Kanchanjungha, Ray is suggesting that there are moments in life, when circumstances combine to transform our lives, and denounce our old comfortable lies and pretences, our half-accepted enslavements to customs and traditions: sometimes, all of a sudden, a light shines and we see how imprisoned we had accepted to become. A family can be the worst of prisons. But it is first and foremost composed of individuals, who have a right to decide for themselves which path leads to happiness, who have a conscience and a heart to guide them towards their accomplishment. Nothing poisons relationships more than half accepted, half baked submissiveness. A voluntary acceptance of dependence (in spouses) and a recognition of authority (in children) can and must go hand in hand with the overall respect for individual choice, once the subject is responsible enough to decide for himself. Perhaps there was a time when the standard Indian family needed to be reminded of this lesson? A number of elements in the film are the catalysers of this necessary revelation and ensuing transformation. I’ll choose just two of them, but there are probably more. Birds, first, and children. Jagadish the bird-watcher draws our attention towards the fact that birds, especially migratory birds, can be heard, but are difficult to watch or catch. They stand for the free individuals who can fly for thousands of miles to nest, but are vulnerable in today’s nuclear age and could easily die if too much caging up is forced upon them. Birds are often invisible, but what beauty when you can observe them in their freely chosen environment! Children likewise are one of the film’s powerful symbols: first little Tuklu, who circles round and around her parents, protecting them by her invisible thread of need and love, and then the little native boy who hovers around the group like a tame birdy, and gets the chocolate M. Bannerjee had intended for Moni as he abandons his courtship. One is reminded of William Blake’s Songs of Innocence: What struck me in Kanchanjungha is Ray’s entomological approach to the various people under his observation: each one of them seems isolated and detached on his or her background. Very rarely do we see them touch and reunite. There’s this picture of the father and his girl, but unless I’m wrong, otherwise they’re all separate and solitary, like the five peaks of the Kanchanjungha range, with the formidable father rising higher than all of them. But well, they all find their meaningful position and purpose in the end as the slanting rays of sunset reveal India’s highest peak. PS: Just wanted to redirect those of you who know Matthieu and his Indian voyage: he'd been to watch the "moment of revelation" in Sikkim in March 2010: link