Do you have an hour to spare? 74 minutes to be precise? WATCH THIS NOW. And then come back to read. « This » is Satyajit Ray’s little marvel called Kapurush (1965, The Coward), a marvel of economy and inspiration. The story begins at night (it ends also at night), in a countryside road station; Amitabha Roy (Soumitra Chaterjee, as superb as ever), a successful scenarist who is touring for ideas on his next book, is blocked by a little mechanical snag and his car can’t leave before a few days. In the shop at the same time is present a middle aged tea-planter, called Bimal Gupta (Haradhan Bannerjee, who plays the boss in Mahanagar, a film whose evocation of the balance of powers between the sexes is very close). Naturally enough, he offers to take him down the road, telling him he needs company. The proposal seems honest enough, and Roy accepts. But when they arrive at the tea-planter’s estate, and he meets his host’s wife, Kuruna (Madhabi Chatterjee, as cunning and charming as ever), we immediately understand that something is happening, that the shock expressed on Roy’s face is the beginning of the story. Thanks to a flashback, we learn that the two, Amitabha and Kuruna, had been lovers before her wedding, and that her uncle had refused the match. She had come in a rush one night to his “three-corner flat” to tell him of her imminent departure, and asking him to leave with her. But he had wavered, unsure of what this meant for the future, and had asked for some extra time. Unfortunately, there was no extra time to be had: Kuruna instead realised that Ami lacked a fundamental “something” which would weigh heavily for both of them. She left, and was married to Bimal. So now they confront, oddly enough, after a few years, and of course ready-made patterns automatically superimpose themselves as to what might happen: are they going to fall in love once again? Is she going to explain that it’s too late? Are they going to be spotted by the husband and branded as cheats? The eternal trio is once again present for us to wonder. But in fact Satyajit Ray is going to choose a route which is more than puzzling. Kuruna is neither going to react sentimentally (either positively or negatively), nor vocally (there will be no row); her character comes out as a rather frigid one, true to say, but one understands that she’s made up her mind a long time ago, along lines that she can’t or won’t disclose to him any more. During the night, kept awake by the memories that break down upon him like waves on the shore, and also by her very presence a door away, he leaves his room, stumbles upon something in the dark and makes her open her door: He then asks her whether she’s happy now, which we understand as: did you make the right choice? Do you not regret anything? At this point, a word about the husband is necessary. Ray goes out of his way to characterize him in depth: he’s the manager of the plantation, a job he finds boring, and we understand he misses a life of entertainment and challenge that the humdrum life in the hills cannot supply. He has become an advocate of drink as the best way to forget the dreariness, but this also blurs the edges of his moral standards. During one conversation, he plays with conscience as if it were a useless artefact one doesn’t need in good society. He’s pleased to suggest that Roy might find his wife proper material for a heroine to add in his new story, something which normal self-respect in him should have reproved. And even if this wasn’t meant wrongly, his wife’s silence doesn’t help. She has clearly decided to dissociate herself from such low taste suggestions. So when Roy asks her is she’s happy, it isn’t only with the hope that perhaps seeing him again (at night, when the husband is asleep…) will make her go back on her (maybe) over-hasty decision. With such a husband as hers, he has good grounds to believe that she’s obeying the good-wife code in spite of her better self. After all, what sort of woman is she? A very pleasant flashback shows her as a fiery young student courted by a phlegmatic Amitabha in the bus, where she’s asked for her ticket by the conductor, can’t find it and he pays for her seat. She then thanks him in an adorably playful way: The fun of this little scene is that we don’t know at first if it shouldn’t be understood as the beginning of their relationship, and the tongue pulling suggests that perhaps not, perhaps they already know each other, perhaps it’s a sort of game:

- I bet you I can pretend when the conductor comes that I don’t have a ticket!

- Come on, you’re a serious, law-abiding person aren’t you? Why would you do that?

And so her tongue–pulling could be her victory, won over her doubting lover and the “serious” social values that stop women from playing with them, and in effect, being free once in a while. This is the gist of her intervention, the night she had come to his place and had said she was refusing to follow her uncle. She had bitterly criticised her relative for wanting to “put her in her place”, to make her play her feminine role, she, the artist, the free-thinker! But then she had realised something else as well. Amitabha is paralysed by his respect of social conventions and propriety. He tells her, for example, that he knows she’s used to a certain degree of comfort, a level which he’d come to her house to ascertain. She didn’t know of this checking of his, and exclaims: “you came to my house and didn’t ask to see me?!” and he has nothing to answer. The little crisis thus puts the difference between the two of them, which she knew of (“you won’t get rid of me so fast”, she says), in a stark light. Kuruna’s strange answer about her happiness comes later that day, when the couple take Roy back to the train and stop on the way for a picnic: the husband has walked off, leaving them alone, and Roy attacks one last time, underlining how utterly unmatched he finds the two of them. But she answers him he’s only judging on a day’s impression. Fair enough. Now when this comes: Perhaps I didn't want to be happy

what is he supposed to make of it? The easy answer is that she’s avoiding a proper answer about her wife’s duty to her husband, because it would alienate her from who she’s posing as in front of her old flame. Perhaps I don’t seem happy the way you think (she could say), but I have reached a happiness which it would take too long to explain to you – you would have to know Bimal as a man and husband. I wonder though if Satyajit Ray – because of what we know of her thanks to the flashbacks - isn’t suggesting a different idea. Amitabha’s idea of happiness doesn’t suit her. She would have wanted a life of risk, of creation, of freedom, a life which is reserved for men, which only men are allowed to enjoy. That day in his tiny flat she understood that the “something” he lacked was a certain spirit, which we have to put in correspondence with the courage she mentioned during one of their conversations: Amitabha’s “cowardice” therefore refers not so much his lack of resolve on that night. It refers to a more serious flaw, the unquestioned acceptance in him that women can only be “happy” in life, “happy” in a flat and conformist way. But why then has Kuruna accepted to marry Bimal Gupta? She could have fled on her own, and judged both her uncle and her lover as poor mettle for the life she wanted. There’s a sort of mystery here, but part of this mystery can be lifted, if we listen to what she says and observe what she does. First the film doesn’t enable to answer that her relationship with Bimal isn’t the adventure she had hoped for. We don’t know what their it is, and there’s sufficient room for speculation. The fact that she’s really cold towards Amitabha could mean she’s fulfilled at least part of her dream. Then the sleeping pills. He can’t sleep, and asks her for some, and she does have some. What’s more, she needs them for herself. Now of course she could be medically or psychologically in need of them. But the importance of the pills (if you’ve seen the film, you know!) means that she probably depends on them. She knows the risk of taking too many, because she gives the bottle to Amitabha and says “only two” in a meaningful way, and adds that she knows he wouldn’t abuse them. This remark can only mean one thing: once a coward, always a coward. On the other hand, she has the pills in case the life she has accepted must be terminated. Her freedom is preserved insofar as she’s the master of her fate. And the lost, empty look which Ray shows us of his face indicates that he’s, alas, a prisoner of his: 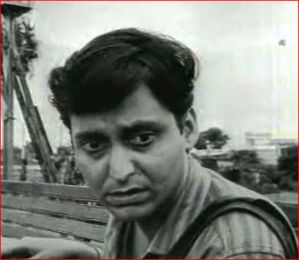 You’ll find here a look at Mahapurush, which is presented by the Official Satyajit Ray website as a double bill with Kapurush. I still have to see Mahapurush, but Kapurush can unhesitatingly be watched alone. Apparently in Bengali, Kapurush means “the bad man” whereas Mahapurush is “the good man” (its official translation being “The holy man”). I’m not sure that Amitabha is really a “bad” man – he isn’t, he’s just weak and conventional. If he were worse, it might have been better, almost. But he isn’t, and that’s his tragedy.

I'm very pleased to add this request to go and read what Beth says about the movie: it's brilliant.