Shyam Benegal generally explores the forces which can endanger or wreak human communities, and what happens to individuals in the process. The result is often pitiless. Hopes are crushed, and ties bruised. Instincts are hypocritically presented as virtues and the cruelest calculations take the place of relationships. In Kondura (1978), called also “The boon” or “The sage from the sea”, the 1934 born pioneer of Alternate Cinema investigates the world of sacredness and religion, whose laws are just as ruthless. The story takes place somewhere along the coast of India, in a village where we focus on a Brahmin family composed of two couples, one of which is dependent on the other. At the beginning of the film, we attend to a row, and we see the younger brother of the two (Parshuram, played by an excellent Anant Nag) leave the house in a huff, walk through countryside towards the beach, swearing that he will never come back, that his wife makes his life impossible, and that he’s better off on his own. Then all of a sudden, he’s called by an apparition, a Neptune-like figure standing on a cliff, with a long staff in hand and white hair. It’s Kondura, the local divinity, who gives him a twisted root, asks him to go back home and everything will be alright. But he must remain celibate. After his return he wants to verify if the divine message wasn’t an illusion. He makes sure about Kondura by asking his mother, and there’s another person from the village who has received a gift, this time for locating water, and so he’ll test it to know if his gift is authentic. He asks him to come to his house, and among jeers and taunts from neighbours (especially the village teacher, who derides his stubborness) and family (his brother believes he’s gone mad), he pays villagers to dig a well at the spot where the water-finder has said (thanks to his gift) it would be found. After a long dig, and the use of dynamite to break a stone at the bottom, water emerges. But he’s infuriated, and to everybody’s surprise, doesn’t want to use the well! Then he starts hearing bells in the middle of the night; he walks through the empty countryside and reaches the temple where the local priest finds him asleep one morning. Again he’s derided by his family, who has also started noticing his abstinence. His wife Anusuya is a village belle of sorts (Shyam Benegam hasn’t chosen her too beautiful, a good point), and is clearly in awe of him. She speaks little. One day, as he’s again in the temple, he has another visitation, but this time it’s the Devi herself, and she looks exactly like his wife! First Parshuram thinks it’s her, but she explains she can take any form she wants in order to appear to mortals. Her message is that sins are increasing, and that he has to rebuild the temple. For this he needs funds, and so he goes to the local zamindar, who’s a tyrant and a womanizer. He’s living with his dimwit nephew and the orphaned young woman (Parvati, played by Smita Patil) from an impoverished family, whom he’s married away to his nephew in the hope of having a descendant which his wife can’t give him. One or two signs make us wonder if there won’t be a fateful attraction between the young Brahmin and Parvati: she’s seen in a lascivious dream-like situation, which recurs as soon as Parshuram thinks of her. There is also this frequent close-up of a stuffed tiger with fiery eyes and teeth, which stands at the entrance of the mansion… 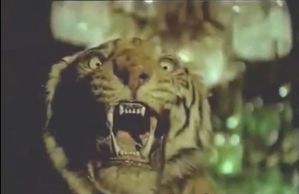 Anyway, the formidable land-owner submits easily to the request, much to the surprise of his attendants who had been asking for the temple to be rebuilt these last twenty years. The restoration starts, and Parshuram enrols villagers to pray for the sins the Devi has been complaining about. Now the place is awash in all day long chanting. Parshuram’s brother, along with the bespectacled teacher, come up the steps one day and tell him how foolish all this is, that the money could have been spent for the well-being of the villagers, or for the children’s school. But Parshuram cannot go along with these reasons. His mission is to do what the Goddess has urgently asked him to do. She now visits him pretty often, an each time it’s a more solemn warning: the sins are increasing! Parshuram is at a loss, what more can he do? But she doesn’t give him an answer. By now he has become a venerated figure in the village and his former enemies have abandoned all cause for derision. The temple priest, his family, all the village, everyone excluding perhaps the teacher, see in him a genuine guru and he’s visited as a counsel and a guide. Rich pilgrims shower him with fine gifts. The landowner’s family comes to the temple to receive his blessing, so he has an opportunity to lay his eyes on the sumptuous Parvati. But I should say open his eyes, because we are shown him shutting them in an attitude of indifference to the world, and conspicuously quickly opening them as she passes. So more possibility of drama here, especially since between him and his wife, the abstinence issue is now a big deal: they are publicly encouraged to remain chaste as a way to further Parsuram’s mission as a healer and provider of spiritual blessings. And we start wondering if Anusuya’s appearances as the Devi aren’t part of a diabolical plan she’s rigging because it gives her a whiff of “divine” power too… The news are spread that Parvati is expecting a child and Anusuya is invited to the mansion for the celebration in honour of the announcement. But there she’s noticed by the ever greedy Zamindar who bluntly tells her she’s good-looking and asks her to come up with him. She refuses and runs away, and soon enough Devi Ma appears to Parshuram with the information that the sins are identified: the zamindar is the cause! Blinded by his desire for Parvati, Parshuram thinks the zamindar’s crime is to have inseminated Parvati. Her weakling husband can’t have done it, so he’s the only possibility. He decides to make her drink a potion to cause an abortion and uses Kondura’s root to prepare it. At the mansion, he uses the pretext of wanting to cure her husband’s infirmity and she drinks the potion. But he’s stopped upon leaving by the zamindar, who inadvertently makes it clear that he wasn’t responsible for the pregnancy! Running back home in a panic, he meets his wife, tells her of his “sin” and it dawns upon him to "cut sin with sin": and he makes love to her in spite of her paralysed trauma that he’s breaking his vow of purity: The next morning she’s found dead, having apparently thrown herself in a well which looks very much like the one Parshuram had dug at the beginning of the film. Rather disappointingly, Benegal doesn’t take advantage of the possibility of transgression of religious order which he had been loading the story with, for nothing happens between Parshuram and Parvati. In the same way, Bhairavmurty (the zamindar) admits his guilt and his sins, but no sanction or punishment crashes down on him. So perhaps this disappointment in the unwinding of the story can be counted towards an appreciation of the film as a denunciation of superstition, as some people say, because a more symbolically charged, more eventful ending might have meant the film’s story was to be interpreted on the fictional level of religious symbols, and therefore within the sphere of faith. On the other hand, apart from the last apparition of the Goddess, which seems linked with the events at the mansion between Parshuram’s wife and the zamindar, nothing is clearly hinted as to indicate that the film is taking position for or against religious beliefs in a transcendent world which would influence men. And perhaps one should not be as clear-cut: it’s quite probable that Shyam Benegal isn’t up and against religion or the belief in God: if he’s targeting something, it’s only an excess of gullibility in divine manifestations, to the point that they can manipulate human lives and make men the fools of themselves. Yet what he suggests about the forces of the sacred turns the film into a kind of documentary on popular religion: left to their own resources, uneducated human passions run the risk of transforming themselves into forces whose violence is justified by divine purpose and order: and the ensuing havoc, because it is seen as resulting from divine realities, is passively accepted. Now clearly this can happen too when one believes in the divine forces as real. The human being can be seen as the seat of the divine, and his passions the expressions of God’s presence. Or the existence of tensions can be encouraged by faith in God if these tensions are judged too strong to be dealt with through human means. Likewise, a low level of science and knowledge will leave men unprotected if natural forces within them assail them to the point where they will be supplied with unchecked interpretations coming from the divine world of superhuman dimensions. One way or another, Kondura belongs to the harsh series of religious analysis, alongside with Satyajit Ray’s Devi and Ganashatru, both very critical of superstitious religiosity. One can also remember what Vijay Anand had done in Guide, RK Narayan’s filmed novel. There seems to be an intellectual stance that popular religion is a waste of time and money, and that, even though one realizes it’s as enduring as the country folk itself, these people want it and need it like the air they breathe and the water they drink. And so perhaps recognizing this more than Ray had done, Shyam Benegal has left room for a certain positivity of the religious customs: his Parshuram is never seen as taking advantage of the power laid into his hands; one can look upon him as manipulated, true, but also he can be seen as a mystic, an authentic mediator of divine intervention. The zamindar quite flatly admits his sinfulness in front of him, whereas the movie could have easily used a little irony there. And when in the end Parshuram realizes he’s been wrong in his construing of the Parvati situation, and his wife is dead, of course we must think he has been deluded in a way, but not that he had really other choices. So all in all, a well balanced account of the importance of popular religion, with its complexities and inescapability, but also its need for enlightened understanding. An interesting commentary (seen from a lawyer’s perspective!) can be read here, (sorry the link is now dead) another one here, and the movie can be watched here.