For once I thought I’d jump back to the present and enjoy a little contemporary Bollywood.  So I pored in my box of unwatched movies and saw Love aaj kal (Imtiaz Ali, 2009) with the alluring eyes of Deepika Padukone smiling at me with their healthy skin and smart brows. And well, good ol’ Saif in the bargain – couldn’t be too bad, I thought. (And what the heck!) So: verdict? Not too bad. But in fact the movie was a confirmation (and not a condemnation) of my love for goldies! This "contemporary" movie (with Rishi Kapoor's voice perhaps) seemed to tell me: "Yves, don't worry, your time isn't wasted by watching old movies"! Here’s the synopsis (thanks bollywooddeewana): Jai ( Saif Ali Khan) and Meera (Deepika) are a modern hip couple who live in London, when work and life opportunities arise, they decide to spilt up, however they still remain good friends, they even have a break-up party. At the end of the party Jai meets Veer Singh (Rishi kapoor) who's surprised at Jai's casual manner over his split, he tells him about how love meant a lot more in his days, and in a series of flashbacks the love story between a young Veer (played by Saif Ali Khan in a turban) and Harleen (Giselle Monteiro, not Shweta Gulati, bollywooddeewana), whom he sees and falls in love with at first sight, the movie then keeps going back and forth showing us Love Today between Jai and Meera and Love Yesterday between Veer and Harleen. Harleen Kaur… I think all of us guys have such a name at the back of our memories, a name half remembered, half forgotten, but full of raw emotions and infinite desires like a rediscovered yellow-tinged photo! The movie’s charm starts here, with this name. And Giselle Monteiro’s wide doe-like eyes lend their softness and their wistful nostalgic immaturity to this evocation of long-ago first love. My relationship with Bollywood was a love-at-first-sight too, so it figures!  Dependable Saif Ali Khan in a double whopper role does a good job. Also I like Rishi Kapoor, his teddy-bear chubbiness, his sparkling eyeballs, his strong screen presence, everything! Age hasn't estranged him. I was very pleased at seeing him again. You’ve guessed that his part of the story conquered my affections immediately, at any rate more than the superficiality of the “modern” story, even if I felt that this modernity is exaggerated  in order to appear modern, and shouldn’t be reduced to it so quickly! But that was my first impression. Admittedly, the film “shows how, despite the time differences, love is essentially still "the same” today as it was yesterday (that’s what the wiki page on Love aaj kal dutifully tells us, and they’re probably right, that’s the “message”…) But wait, isn’t this the corniest “message” about romance? Do we need to be told that “love” will always remain the same? Ha! Who cares? Let me just tell you that some of that message isn’t perhaps so useless, and first because the modernity the film (that some bloggers find so Americanized) isn’t as cliché as all that. For instance I found the moment when the two flashy young things meet up again (after having split up, because you see, love should be more like a partnership today) rather cool, and most of all, I appreciated the suggestion that  a marriage could be terminated after the wedding had been celebrated! Are there other movies where this happens? Because in all those I can think of, once the fire-walk is done, finito! No young woman normally dreams of rebelling against the rule she has willy or nilly accepted! But here, Deeps tells her Vikram she cannot stay with him, that there’s something unfinished with Jai… Pretty brave, even if the film might pass as unrealistic here, in fact, because all the Indian husbands I have seen in such movies would say: on my dead body first. So we do have something very “modern” here… I wonder whether this evolution is in fact possible in reality! Are we in “modernity”, or in wishful thinking? Well, depending on how you look at it, the plot might be avant-garde or simply weak story-writing. Difficult to say, maybe. What seems to me rather clear, on the other hand, is the film’s acknowledgement of “traditional” love-making. Because for all Jai’s reflection (while he’s in San Francisco – rather uninspired section, I found) and realization, what his return to Meera really boils down to is not much more than an affirmation of Veer’s principles. We do not really have two lines converging towards the same point (Jai's and Veer's), but one line imposing its direction to the other. Today’s version of love can boast some value (a certain freedom, a certain frankness), but on the whole, what is said here is that the old fashion, yesterday’s love, was greater, safer, and kinder. Veer implies that when he suggests that young people have too many things to think about, whereas they only had one: love, and life wasn't fulfilled if you hadn't loved fully. It’s the old unfair battle of essential vs. incidental. The old way understood love as essential; today, it’s one among a number of concerns. And don’t tell me that’s wrong because Jai finds himself pairing with Meera in the end. The entire movie suggests on the contrary that Veer’s story has made Jai understand the futility and unimportance of love seen as just an expendable “occupation”. And I’d say that the trick of having Saif play young Veer in the flashback sequences serves to prove that point: because otherwise, it’s a rather strange choice, no? Why else have Jai impersonate young Veer fighting for his love? The only plausible reason that I can think of is because Jai’s projecting himself as Veer, because he’s taking a personal interest in the chacha’s story. And also because the film can tell us that young people must not forget how love used to be all-important, in previous Bollywood movies – er, I mean, in former times. Even Meera, what’s her job? She’s a fresco restorer; she works as a rejuvenator of old artistry, old representations which time and neglect have reduced to bad repair. Isn’t this a fit symbol? Jai the bridge engineer and Meera the fresco mender: so much as to say, our present depends on our links and our faithfulness to the past, to what the past held as most precious and most beautiful.

Okay, I’ll take this as a justification for my addiction to Raj Kapoor, Bimal Roy and Satyajit Ray! Clever, huh? 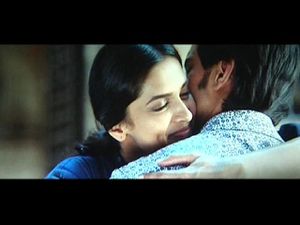