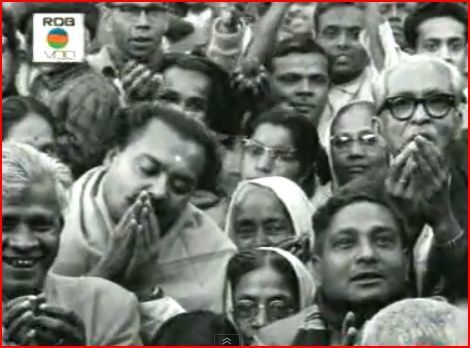 After having watched Kapurush (see previous instalment), I was strongly urged to see Mahapurush, Satyajit Ray’s twin production in the tandem that came out in 1965. The theme of the manipulative bigot is a famous one in French culture (see for example Molière’s Tartuffe, and the many lovers of Asterix and Obelix will also remember the immortal Le Devin!) and so Ray’s opus struck a familiar chord.The tricks used in order to create credulity and at the same time to expose them thanks to humour were very recognizable. Even so, Ray’s short film works as a superb satire of religious manoeuvring, and is naturally aimed (like Ganashatru) at targeting Indian shallow and irrational religiosity, here personified by a  forlorn lawyer called Gurupada who (back from Benares with his daughter Buchki) meets the travelling guru Brinchi Baba (and his eye-rolling assistant). The witty sage immediately senses the prey and gets himself invited tax free at the home of his new supplier of good fare and limitless trust. The two parasites are marvels of characterization: first the assistant (who was already Narsingh the Kshatriya’s wily servant in Abhijan) serves as a perfect foil for this other master of his, pretending to be the spineless disciple in front of everyone, but when his mask is off, knows exactly what he needs (food and women): Brinchi Baba has the majesty of the lion, the squint of the fox, the tricks of the monkey, and the slitheriness of the serpent. This is no ordinary charlatan: he knows human psychology and can evaluate group phenomena to a T. On the train, upon meeting Gurupada, he demonstrates how to make the sun rise (only Joshua was able to do something of the kind in the Bible, and under God’s orders!), and miraculously annihilates all his bad feelings with his strong grip. He also has this mind-boggling trick of turning his fingers in opposite directions, something cognologists know is difficult for the brain to perform because it is contrary to its symmetrical nature. Brinchi Baba does this in order to mystify his spectators: they try but only few succeed, so the message must be: the Baba is skilled in weird and difficult lore, he deserves our respect. Finally, he acts the time-traveller, and pretends he’s seen and talked to the greatest worthies of all time, Plato, Jesus-Christ, Einstein, which is coherent with Hindu reincarnation but also with remembrance! Such extravagance works all the more as it’s “incredible” – the more the better. And of course this goes along with manipulation, because how can you survive as a quack unless you make people buy your truth? The money (or time, or effort) they spend makes them believe that what they revere has a high value (haven’t you noticed it’s much more difficult to get a statement of disapproval about a bad show, if the people questioned have paid a great deal to watch it?), and so we see the impostor perform his Initiation rites, and many attendants sit in awe in front of him to watch. All this is very well known. It plays on the pre-scientific mentality which continues to exist when people are fed up with logic and reason, which they have been convinced (sometimes rightly) do not always work in life. It is mostly efficient in under-educated societies in which the normal dose of critical thinking hasn’t been taught at school, and elites can thrive on these gullible masses. Classic also in this type of story is the exposure moment, and here I thought Ray was a little less inventive than I would have hoped. The trick which the rationalist team uses in order to denounce Brinchi Baba’s sham doesn’t really strike as a victory of light upon darkness. Throughout the movie, there had been an insistence on smoke and smokescreens, which was fair enough, but the revelation by fire could have been more spectacular, I thought. Ray had also at his disposal the shatranj motif (we see chess players in close-up at the beginning), which might have been used to prove that reason and logic are as spiritual as emotional piousness. But this wasn’t forwarded. Another weak point is the love-affair, between Buchki the dour would-be follower of Brinchi Baba, and her young lawyer, but thematically, nothing much is made of it. 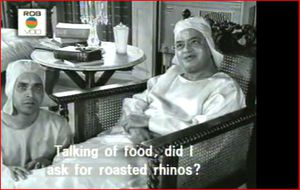 Certainly the movie’s strong point is the masterful use of comedy. One example: during an religious ceremony, the Baba is facing his audience and each person who comes to be blessed by him is given a gesture of his two arms, up and down, a totally ridiculous gesture which is clearly intended at satirising his practises, but nobody notices, blinded as they are by their crazy belief. Last but not least, Baba’s spectator-intended speeches about his supernatural knowledge of past events, past geniuses and time itself: for all followers, what he says is like a golden font of mysterious truth, whereas it’s so clearly gibberish that we can commune with him over their heads, and laugh with him at what he’s saying and doing! 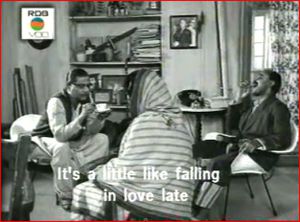 One word now about the pair Kapurush-Mahapurush. The coward and the holy man (literally the bad man and the good man) are opposed in principle, and could signify two contrasting ways of behaving in society: one retreating and regretting, the other self-assertive and unscrupulous. The question is: what’s Ray trying to tell us here? Why did he put these two movies side by side and what light does each one shed on the other? In Kapurush, we have the hero, Amitabha, who is so respectful of social order that he cannot act and is mired in hesitations and remorse. Brinchi Baba, on the other hand personifies the exact opposite, a social manipulator so skilled that he can make everybody love him and believe in him just by snapping his fingers. If there is such a thing as a moral standard, Amitabha is higher on that scale than Brinchi Baba. It’s true that his procrastination has perhaps caused his girlfriend’s unhappiness, but certainly the Baba’s flaunting of all trust and his disrespect of holy things can earn him nothing but scorn. Clearly Ray would want us to think that way. Yet his ironical movie titles, and even more, the fact that the two movies are bundled together, shift the scales slightly. I wonder if he isn’t saying that, as it is, society is like a fortified citadel of the past which one must conquer and transform because only such an attitude can make reform and progress happen. If indeed society must be changed by force (because it is too difficult to change in any other manner), then Brinchi Baba is indeed the holy man, and Amitabha the coward. He’s a coward in the sense that he’s conforming to an order that cannot be upheld, whereas Brinchi’s holiness lies in his lack of principles when dealing with an even less scrupulous society.

The film can be watched here (no subtitles sorry, the subtitled version has been suppressed from Youtube), and if you want to read a very pleasant review, here’s Sharmi’s.