1966: The same year that she was shooting Anupama, Sharmila Tagore played in Satyajit Ray’s Nayak (The hero). Her character is quite different of course, but not without certain similarities: in both movies, she plays a sensitive, quiet and very feminine character whose main function is to change a man’s heart thanks to an understanding that goes beyond words and thoughts. The main difference being that Uma was a shy, retired girl whereas Aditi Sengupta in Nayak is a self-assertive “modern” woman. In front of her, the “hero” (Uttam Kumar, a fine actor with the features of a young Orson Welles), called Arindam Mukherjee in the story, who’s travelling from Calcutta to Delhi by train (no seats available on the plane because he first didn’t want to go) to collect a prize for one of his roles.

The great originality of this movie is the fact that it takes place almost entirely on the train, which thus clearly becomes a (classic) metaphorical medium to express the transformations that will take place during the film. The movie’s train accomplishes naturally more than one travel only! On board the sexy and successful Arindam will have to brush his “heroism” against a number of observers and admirers who will all serve as tests: what’s this hero worth? And in fact, what is a hero (today we’d say a star)? What’s inside and what’s outside? Why do we have “heroes”? Do they serve any important purpose? What does this popularity mean? Satyajit Ray, I believe, asks all these questions, and his movie answers them. First, the simple (naïve) “fan”: Arindam shares his compartment with a family of three, father, mother and girl who spends the entire trip lying on her bunk because of a fever, which leaves her in the end (because she’s cured of her infatuation?). With her mother, she’s seen all of his films, asks for an autograph, and continuously gazes at him wide-eyed, not believing her luck at sharing some space with her idol. But later in the film, she discovers the hero has to take pills to sleep, and then, horror, she sees him drunk: ominous signs of a less commendable life, which her mother will in vain try to turn her eyes away from. She’s seen her hero fall from grace. This won’t stop her from continuing her admiration, but this time within the arms of her parents. Then we have the restless, unsatisfied young woman her husband wants to use as a bait to further his marketing plans with an important patron he’s met on the train. At first she resents this “employment”, and he has to explain what he wants to submit her to. But realizing that the famous actor Arindam Mukherjee is there on the train, she comes up with a plan: she tells her husband she’ll do what he wants if he accepts her desire to play in the movies (she’s begged Arindam, and he told her to ask her husband). So what has happened is this: the star’s all-powerful presence has crystallized her desire and made it move closer to reality. But at the same time it has made her move closer to selling herself and becoming that “object” her husband had in mind. The mimetic process has once more operated its moral corruption in her case. But the main encounter centres around the woman-reporter played by Sharmila Tagore. In fact the movie explores other interactions of the hero with his surroundings, but they’re shown as part of the story he tells the young reporter, and shown in flashback episodes. Everybody realises that stars need the press, and have a special relationship with it. That's what the young reporter's presence is all about here. Miss Aditi Sengupta is travelling with a couple of friends, who notice the presence in their train of the famous actor. Now the latter has left Calcutta in a bad mood, owing to the revelation in the press of a “scandalous” recent event involving him, a fight with the husband of a heroine who plays in his last film. She wanted to come along with him, but he refuses, conscious of the catastrophic effect the affair has already had on his image, which is clearly his main professional asset. A popular cinema hero cannot live a life too different from the characters he impersonates, especially if the differences mean “vices” and involve scandal.

But why this insistence on scandal? What’s a scandal? Concerning a public figure like a star in the Indian cinema during the sixties, anything which would spoil the moral perfection such a person should display. Any evidence that this artificial perfection doesn’t correspond to reality. In fact, anything that breaks the myth. Because in those days (before our people magazine days) a hero, a star represented the projections and dreams of the millions who went to see the movies. If s/he wanted to continue to make them dream and hope, there was nothing less than perfection, or quasi-god status to keep up. Hence in Nayak all the allusions to God, because only a God would be able to remain a hero without falling from grace: The little magazine edited by Aditi doesn’t contain any cinema reviews, probably because any subject which might come too close to frivolity and gossip isn’t suited for serious readers the “modern” women she is targeting. But her friend challenges her: Arindam’s right here, he’s got a story to tell, why doesn’t she get it? It would boost her sales! She tosses a coin, it’s heads, she goes, even if she’s critical of people like him, who take on parts where the hero is like a God (today we’d say a superhero), managing everything effortlessly and miraculously. Coming up to him, she makes her superiority felt, and he rebukes her: 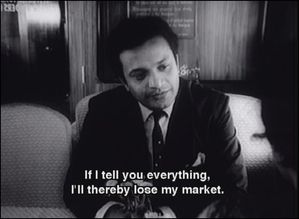 But then the dream intervenes: Arindam goes back to his car and dreams of money, so much of it that he can walk from one heap to the next! But soon darkness falls on the scene and skeleton hands start appearing from the piles of banknotes. He then falls into a hole, and lifts out his own hand for help, and a strange man with flaking skin like a mummy comes up to him, reaches out  but lets him sink: Arindam wakes up in a fright and goes back to the dining car where he tells his dream to the young woman. The man in the dream is his mentor, Shankarda, who had warned him against choosing cinema, where (contrary to the stage) the actor is nothing more than a puppet, manipulated by the director, by the photographer, by the editor, etc. The cinema actor, on top of that, is deprived of the main source of inspiration, which is the physical presence of people in front of him. Anyway, as he tells her his dream, she realises he’s ready to give her that story she had been looking for, and she starts taking notes. And so, with the backdrop of the landscape rushing past outside (his life?) we follow his story, the one he doesn’t tell his official biographers.

It contains souvenirs of his ascension to the top-notch level of the profession, how he was snubbed publicly (because he didn’t place his voice properly) by the great actor Makunda Lahiri, but who let him play in his first film; and there’s also a scene with this same man some years later, when after a series of flops, he has been rendered unemployed and comes to beg for a little part – a watchman, anything. But Arindam at the peak of his glory had refused to stretch out his hand to him, and the old man had been left meditating on the “proverb of the dead elephant”. 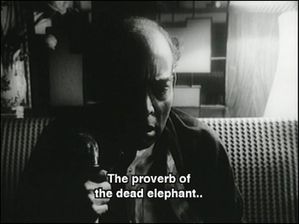 Same story more or less with one of his college mates, Biresh, who’s involved in politics, and whom he refuses to help because he doesn’t want to be seen compromised in anti-government protest. He reflects he’s fallen in his friend’s esteem, but we understand his own self-esteem has also dropped, and that something’s eating him from inside: greed, ambition, selfishness. He has bought his glory at the expense of his own freedom and peace of mind. He’s a solitary occupier of an empty throne, from which he will soon be “thrown” out by another aspiring hero, as Makunda laughingly suggests. Slowly Aditi the predator changes her attitude towards her conceited prey, and sees through him: he’s not much more than all of us, with his merits and weaknesses; his hero-status has turned him into a victim of forces beyond his control, and she can see he’s in danger of succumbing to them. That evening, in the dark corridor, Arindam, drunk, looks at the moonshine glinting on the sharp blades of the railway tracks outside, and Aditi orders him to get back to his seat before she leaves herself.  As he told her earlier, he’s a disenchanted creature “of light and shadows”, in whom the shadows have started blackening the light more than he needs. The emptiness of his life is now clear to him, now that he has traded his ordinary life for that of a “hero”. Because the hero changes personality film after film, and is nothing but an empty disguise. Again, the mimetic theory explains this flight away from the true self very well. So the surprise of the movie comes when, not long before arriving in Delhi, the two meet one last time and in front of him she tears the sheets of paper on which she’s written his story. He’s surprised, but she explains that he has his role to uphold, his public to please, that people need him as a model, and that this mission is apt to reconcile him with himself. So I’d suggest that what Ray is saying here is that the actor’s career carries a great responsibility; it’s a risky one, but has social importance. He doesn’t go as far as to suggest that all actors should become militant and defend causes, political or otherwise, but that their moral role can be fulfilled in spite of the hypocrisy and compromises of stardom. 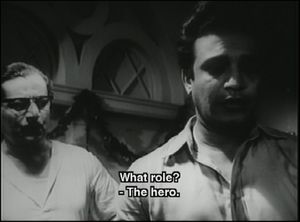 The other surprise is that there is no romance in Nayak. The actor tells the editor at one stage that she’s beautiful without her glasses, but she smiles and quickly puts them back on again. She doesn’t want to fall into his trap, unmarried as she is. He asks her whether she might contemplate changing her career and becoming an actress. But the “wise” (that’s what he calls her) woman declines. Such a task cannot be hers. And the tearing of the notes indicate that she wonn’t even participate to that star mongering of another kind, the accumulation of gossip concerning well-known people’s lives. Paparazzi (and the press in general) are indeed people whom stars need to remain interesting and popular, and dealing with them cleverly is a profession in itself. So that, down deep, Aditi has perhaps shown more consideration, yes, more love to him, than an overt lover would have: she has told him his truth, and refused to mimic him like that other woman in the train. She (and Satyajit Ray) has given him the only thing a hero really needs: a bit of humanity. PS: a very noteworthy review by Sharmi has just been written on the film: it's here