Because Provoked (2006) is a rather good little movie, the filmed autobiography of the heroine, played here by Aishwarya Rai, who reinforces her acting capability, demonstrating that even if she is a pretty face, she can also do the job. Some people say other actresses would have done better: well that’s a present for her, thank you! I suggest looking at those scenes when she’s in the prison, with the other inmates, and perhaps most of all in front of the devastatingly optimistic Radha Dalal (Nandita Das), who with her smooth brown tan and sexy haircut makes a good contrasts with Ash. And there’s this final scene where she manages to half smile, half cry, obliged as she is to celebrate a “victory” which isn’t completely hers (see photo below): quite nicely done. The movie belongs in fact to India’s social movie strain, where the masala ingredient is reduced, because it has a message to pass on: that of male abuse against silent wives. So there are no songs, only Rahman’s efficient background music (ah, those haunting chorus voices when the suffering gets unbearable, and through them we hear something of humanity’s chant for mercy – it is to be heard in Roja, in Rang di basanti, the same distant wailing, desperate and poignant).  Here, it springs up as Kiran is thrown down on the floor by her Iron Man: But the film is pleasant and generous also because it’s packed with a healthy humour, as when the Southall Black Sisters, the Women’s Rights defence organization who are campaigning to get Kiran out of jail, are sticking posters on a “no bills” wall: a dutiful cop stops and tells them that “no bills means no bills”, and they comply, but not after having stuck one of their posters on the rear window of his departing car. There are also spirited scenes in the prison, especially that moment (opening photo above) when Kiran unbuttons her friend’s blouse for her to create a better effect at an interview, and whispers “Bosoms!”, in a reference to a reading class where Kiran had stumbled over that word. But of course, the allusion underlines her contribution to the effort towards feminine empowerment. That cellmate of hers, by the way, has been justly praised. Veronica Scott is played by Miranda Richardson, seen in Blackadder, Harry Potter and Absolutely Fabulous, but I enjoyed her talent in The hours, where she graces the exceptional trio of Kidman, Moore and Streep. As a matter of fact, whether this bit (in Provoked, I mean) is historical or not, it perhaps makes the film a little too good to be true. There are certainly other Kirans in other prisons of the world, who have not have the luck to be jailed with the sister of a Lord. But let’s now come to the film’s axe. Provoked is a denunciation of male domestic violence. You might think that such violence only exists in social backgrounds in which the male is recognised as owner of his female, and where women have but a fraction of the masculine rights. In certain traditional Islamic communities, for example. But even if that is true, the situation is not intrinsically a question of ethnic or religious milieus. It is fundamentally a question of law. In countries where women have been strong enough (which means educated enough) to have laws voted which protect them against male abuse, the reality isn’t as pervasive. This means concretely that in those countries, certain men have accepted not to side with other men, when the offenders exert what they see as their natural virile superiority. Some men instead side with these men’s women! One realises how very strange such a situation might seem, observed from a traditional male-oriented society. In numerous tribe-societies, women are nearly always considered as lower-class. (There are exceptions, where it is women who exert the authority over the community). Why? I’m neither a sociologist nor an ethnologist, but my best bet is because they have already too much power, and that men wouldn’t have any left to justify their physical superiority. In many regions of the world, it is women who work, prepare food, and raise the children, on top of being more resistant and living longer. Men do not always recognise this superiority, but often don’t, and reduce the weaker sex to a status which enables them to feel superior. So when they reach this stage in the development when they establish laws and customs, they tend to systematically reduce those concern women, and increase the authority of the male over the female. This injustice goes way back to the origins of humanity, the young male needing to affirm himself against his mother, and prove to her he doesn’t need her any more as he grows up. Male frustrations often have something to do with how well boys, and then men, have solved their relationship problems with their mothers. I know Freud tells us with their fathers, but I believe it’s as much with their mothers, because the mother is a subject of love and then interdiction, and this tension creates a need to affirm the young man’s self-reliance and autonomy. So perhaps one might say those male-dominated societies, where women are reduced to servants or even slaves, are “civilised” in the sense that they have legalised this fundamental male frustration. Now situations of violence like those we see in the movie, where the domineering male (Deepak, played a fine Naveen Andrews) is both attracted physically to his wife, and beats her when she doesn’t get his need, are typical of this frustration fed by a feeling of cultural impunity, where women will always be considered underdogs, and whatever is done to them will go unpunished. Deepak behaves towards Kiran as he would do towards a mother-figure phantasm: attraction and disgust combined, and violent domination as response to her demands for mature behaviour. The violence of these situations is dangerous, because the violent person doesn’t understand where it comes from, and cannot measure it; it increases with his powerlessness. Deepak doesn’t burn Kiran with the iron because he can anticipate (visually) the harm he would do, but he doesn’t hesitate to push her down the stairs (she’s pregnant), because the effect of that violence is more easily disconnected from the gesture. When he joins her at the bottom of the staircase, he is both querulous (“it’s not my fault, you should’ve let me go by”) and upset for what he’s done, now that he sees her writhing in agony and fear. Such disconnectedness between cause and effect are typical of the ungrown emotional stages of infancy. Violence in couples are perhaps fuelled by a variety of forces, but this male helplessness at understanding that a loved woman cannot (and must not) be a substitute mother who will satisfy all of her baby’s whims, this creates perhaps some of the worst types of violence; it is an immature and uncontrollable violence in the hands of a grown-up child who doesn’t understand what’s coming over him, and needs all the attention and care from his family. But sometimes there’s nothing to do anymore, because the guy is just too manipulated by the forces within him. And has gone too far for his own good. 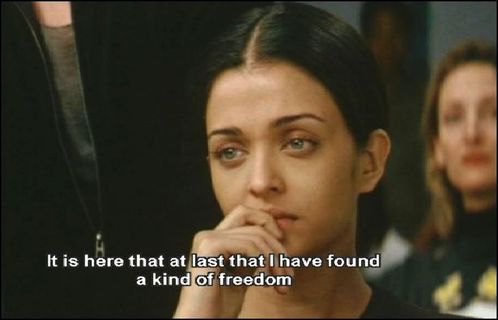 One last word concerning the prison metaphor, Kiran in jail surprises her lawyer when she tells her she’s at least free there; and of course she doesn’t fight at first, convinced she’s guilty and sinful. Macho culture indoctrination takes time to rub off. Her freedom comes first from the fire she lights on him, a purification process which is her response to the defilement she’s endured (Deepak used to rape her), and then of course from the physical distance from the fear and danger she faced in his presence. Any enclosed area world have done the job, and of course it’s shocking for our freedom-built individualism that somebody might say that she’s freer in prison than outside. Well, so much for our limited understanding of alienation. And perhaps this is also a plea towards making our society understand the need for investing in more welcoming prisons.