You probably all know - but I don't care: Memsaab's latest instalment is a hard day's scanning work of 75 pages of text and awesome portraits from a 1952 book by Baburao and Sushila Rani Patel’s called “Stars of the Indian Screen.”And it's FABULOUS. For all those who are into B'wood oldies, it's a fascinating take on 36 actors and actresses (many more of the second sort!!), in majority before they became really great - well, some of them of course had already done their important work, but others were only on the threshold, Nutan for one: 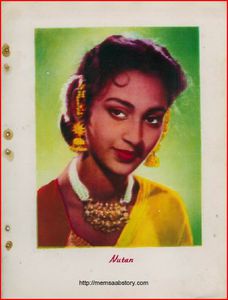 Wow, "rigidly thin!!" - well, I suppose she was simply *growing*, wasn't she? At 16, you can't expect to have acquired all the *flesh* that later years  would bring, can you? If you go and read that Memsaab page, the first quote she gives is precisely about Nutan having "substantial talent for acting but we would like her to add at least ten pounds more to her personality and come to the screen again a bright, well-upholstered beauty." I'm at a loss if this is a woman writing. The book is supposed to have been written by Sushila Rani! Greta does say that Mister Patel's "trademark snark" is all over the bios - I'd gather she's right here

. One thing which I find strange is the mention of movies I'd never heard of: Shikwa, Nirmohi, Malkin. They don't appear on IMDb, but can't have been invented (I don't know if I want to see them, though, I think I'll stick to the well-upholstered Nutan of the later years).

On the whole, what's very pleasant is the random succession of screen worthies, mostly young for the girls, with the exception of an opening on Durga Khote, which must be Baburao's concession to his wife's tastes: One wonders why some well-known people are there, why others are absent. For example, there's Ashok Kumar, but not his two brothers; there's Nimmi and Nargis, but why not Nadira? And all the older actresses are sent packing. Of course, only 36 people means some degree of selection, but why this one? It's a mystery and a charm of the collection. Here's the Raj Kapoor double page: 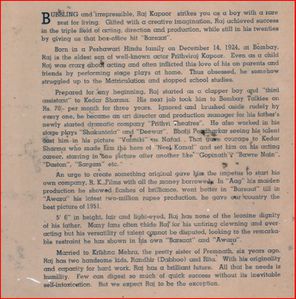 It's the description of the 28 year old showman, with Aag, Barsaat and Awaara behind him, but not yet Shree 420, not yet Jagte Raho or Anari. We learn that the man who decided to cast him as the hero back in 1947 needed "courage" to do so - which doesn't sound like a very positive thing to say even in 1952!

Here are two other posters which I found attractive: Theye're the two heroes of Naya Daur, of which you'll soon hear about! By the bye, the biography tells us that DP loved being with his relatives, and teasing his little sisters. Nice, no? Well, perhaps not, because the addendum sounds like -"what right has he got to say that?" Here it is: "... most of whom are, of course, overweight." Of course!

(but I'm being unjust, there's an overall insistance in the book on fans asking their heroines to be er, what's the word? Ah, "streamlined"). On the other hand, this one has the right profile: 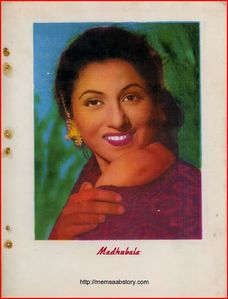 The Patels must have liked her very much - I don't blame them naturally - just listen to this: " Madhu has a pair of refreshingly innocent eyes, a clear olive complexion and an infectious smile set with perfect white teeth (thank goodness they're white, and teeth - what would you have expected? dark fangs?

). Her acting covers a wide range of emotions from the flirtish to the pathetic and she can brings tears to her eyes without the aid of glycerine and dole them by drops according to the need of the director". Well, give me such obliging actresses any day!

Anyway, I want to raise my glass and cheer Greta: thanks and hurray for her work

PS: I wrote this post with the font "Book antiqua" :-)