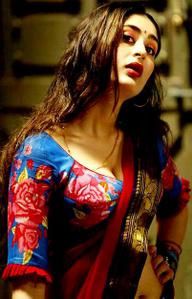 After having watched the film, I asked myself what it had been trying to do... It's a filmed play about these two people - modern-India businessman Rahul Bose and eternal India prostitute Kareena Kapoor - which explores their confrontation: and the immediate effect of such a confrontation is to have spectators wonder what variation of the theme of desire it is going to explore. Will the prostitute open the prim and proper businessman's eyes (and world) to other unpleasant realities? Will he be tempted to "save" her from her fall from grace? Is love going to play a role? How much sex will be thrown into the story?

Interestingly, Sudhir Mishra chooses none of these predictable possibilities. But disappointingly, to my mind, he doesn't really choose another one. Unless in fact the solution which he does choose - a dusky and disillusioned face à face - is the good one given his socially-minded perspective, but somehow I would have preferred a real story! As it is, the film throws you back into lack-lustre reality, where events do not necessarily follow the crisis-denouement pattern; so saying this, I realise that even on such complex and important issues as prostitution and modern-age solitude, I find myself preferring an (escapist?) story instead of a meditation. That's what the cinema has made us expect, probably: stories. But Sudhir Mishra chooses to scenarise events which he can then offer as a comment on reality, and he probably refuses to "tell a story", perhaps because a story keeps you on a level of fantasy, and this is in itself escapist. 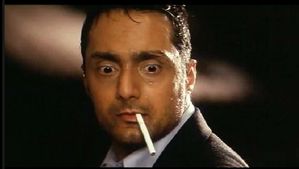 So there: this confrontation between modernist Indian man and prostitute is done to question our assumptions as to what is our relationship to cinema; it also questions our relationship to reality and perception: do we want to accept what our eyes show us? The eternal character of the prostitute is like a mirror: it reverberates our attitude concerning power, desire and meaning. The nature of our relationships with our human brothers and sisters is revealed through this interaction with the Prostitute. She is the one who stands at the crossroads, she knows what our values are, she knows what we value (what worth we give to what), what and how we evaluate people and things. She is the universal Standard. It isn't surprising therefore that Aman breaks down at the end of the night, and tells her his story, his guilt. He has gone through the catharsis of looking at himself in her mirror, and that mirror has shown him what humanity is down deep. It’s interesting, by the way, that Chameli wanted at first to protect him: he's faced with several versions of her story, as if the real one was meant only for those who would go through the night of revelation until the end. Until rainy night gives way to pacified morning.

So all in all, a disturbing film, but for good reasons.

(This review is a copy of the one posted on Jaman.com, where the film can be bought for $4.99) - Update: alas, this platform is no longer available in the way it used to be.