Some of you might remember that I had promised to watch Guide, by Vijay Anand, the movie based on R.K. Narayan’s novel which I had reviewed here. I had been encouraged by a number of blog reviews, but I must say that I have been rather disappointed. I had already been slightly critical of the book, and suggested that the end was a little unsatisfactory, because it was ambiguous; but watching the film brought out all the strengths of the novel, and these in turn highlighted the simplified and romanticised defects of the movie. As Mohit Verma from IMDb says,
“There are two perspectives you can have about this film: firstly if you're an R.K. Narayan buff and had read "The Guide" before watching the film just like me, you might just end up being a little disappointed. On the contrary if you have watched or the want to watch the film, only because of its face value or perhaps because of Dev Anand, then you would enjoy it considerably.”
I’m not an expert on Indian culture, so I have to say the film helped me to understand facts that I hadn’t understood in the book. For example, I hadn’t quite understood from the book that the very fact Rosie is a dancer means that she comes from that category of courtesan girls (see Philip's review on that). Respectable women were not supposed to dance in public. The story goes on to show the transformation of that popular art to a more acceptably aesthetic folkloric tradition, as intellectuals in mid XXth century India rediscovered and re-evaluated their national culture. 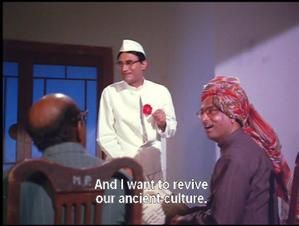 I don’t mind agreeing with the movie’s qualities that other reviewers have pointed out:  the acting, the staging and the shooting, as well as the beautiful songs by SD Burman. Dev Anand and Waheeda Rehman are fine, even though I found Anand sometimes a little unsuited (his role as the swami) and Rehman occasionally bland. But then I had the fresh impression of the passionate book characters in my mind, and neither film characters are a match for those of the book, especially Rosie/Nalini, because in the film she’s has become so very conventional. 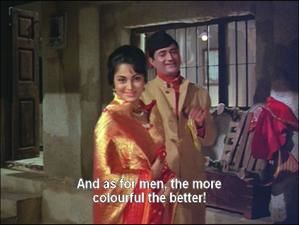 And because of the change concerning her, the story loses a great deal of its psychological interest. The novel’s fiery snake-woman has become a demure young woman, who loves dancing but also her Raju, who has been divorced by Marco who while up in the mountains philanders with a native girl (no such facilities in the novel!), and who does indeed at one point seem as if she’s fed up with Raju, but inexplicably goes back to him. In Narayan’s story, there is no concession to a return to the pre-lapsarian times when Raju saved Rosie. The writer makes him pay for his sins, and die without that rain which the film shows pouring down. In spite of the novel’s inconclusiveness, or perhaps partly because of it, the book reaches much further than the film. It speaks of a vanity, of an emptiness that is much more coherent than the extravagant film ending, with its ridiculous falsely-religious sets and speeches. True, Dev Anand makes a good tourist guide, but his priest role is really poor. We don’t feel at all the progression that takes him from opportunistic role-playing to that half-genuine fatalism, which he understands at the end might finally be morally worthwhile. The “redeemed” Raju of the film is an orange-clad flamboyant hero which has nothing to do with the humiliated individual who feels he’s trapped himself into some silly game, and is slowly awakening to a sort of purposeful morality because he’s forced to do it.

What the film did clear up though, was the role of language, which is also one of the main points of the book. Raju’s secret to worldly success is his mastery of words. It is thanks to his glib and charming sense of humour, his clever persuasion, his rhetoric in short, that he achieves whatever he wants. Guiding means saying what people to hear. 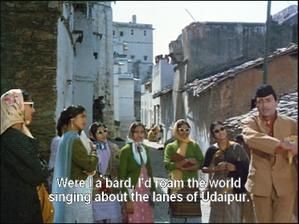 This skill worked with the station tourists, with Rosie of course, who was waiting for somebody to tell her that her dancing was fine, artistically and socially, and naturally with the villagers who make him into their Swami. What they needed was a soothsayer, and Raju is caught at his own trick. Simple and gullible as they are, they cannot understand the subtleties of irony and understatement. For them, evocatively-sounding sentences are symbolical and spiritual. They can’t imagine they might just be as shallow as the little stream near the temple.

Narayan’s work is thus a meditation on the power of language, as well on its dangers. Language is the ambiguous vehicle of truth; if the listeners do not understand this ambiguity, they can easily be misled and duped. But the Indian author has masterfully imagined a situation in which the clever rhetorician is trapped by his art, and forced to confront a truth that he has been evading all his life. That truth is his own shallowness, and the novel shows what it has cost him: work and reputation, love and affection (his mother’s), and above all self-respect. Commodities which, after they are lost, Raju will not regain, contrary to what the film would like to believe. Instead he has to tread into the unknown territory of humiliation and frustration, far from the selfish satisfactions of the Guide-roles. Being a guide (the German has a chilling translation, “Führer”) is a very tempting role in society, especially if you’ve been trampled upon and humiliated during your childhood for example (as was the case for Raju in the book, hence the importance of that first part of the book, which the film doesn’t bother to adapt, not understanding its interest). Becoming a guide meant for Raju taking his revenge on his father who wanted to send him to school against his will, and against the menial social position where he came from. Having become a guide, he can now play with the rules of a society that has played a bad game with him by making him be born in that unjust position. Raju works his way through social injustice thanks to his art of manipulating others through language. Language is the civilisation Code that is supposed to reflect truth and connect all society thanks to this common reference. But language is essentially a double-sided instrument. It says the truth, but it can also say the untruth, and hide this untruth under the garments of truth. When he meets Rosie, another victim of social injustice (the film turns her into Raju’s “saviour”, something the book doesn’t do), it is a clash of two bodies without any soul-mating. Their separation is a corrupt fruit of Raju’s selfish ambitions and power-thirst. In order to save him (if he does get saved), Narayan imagines an ironical manipulation by the lowly equivalents of his own origin. Lowly he was, lowly he becomes. His ascent to glory and riches will have been but an illusion of guidance. I’ll conclude by saying that if I enjoyed some aspects of the film, such as the dances, or the music, I regret the romanticization and the sweetening-up of the film. The book’s bitterness and nagging originality is still felt, probably, by spectators who haven’t read the novel, but one thing is sure: if you want the real thing, read The Guide.