Here’s another beginner – after Aag – Shyam Benegal’s first long feature film shot in 1973, after he had finally got enough appraisal for his work shooting advertisements (apparently more than 900!) and documentaries. Ankur means “seedling”: some people wonder exactly what Benegal had in mind when naming his film; we’ll come back to that, but certainly it’s a good title for the first film in a long series of socially-oriented, politically-committed movies. The quartet of Ankur (1973), Nishant (1975), Mathan (1976) and Bhumika (1977) are well-known for having introduced what is called “Middle cinema” (cf. also New Indian Cinema). The film is also a beginner as it’s Shabana Azmi’s first movie. Given the lady’s successful career after that, and because of the fact that everybody noticed her talent and beauty in Ankur, it lends the film an additional interest. It’s a transgression story, the transgression of rules and norms imposed by a still feudal and machistic rural society. Surya (Anant Nag – funny how he looks like Shahrukh Khan!), the son of a rich agricultural owner, has just finished his studies, and is reluctantly obliged to run the parental farm where he upsets the traditional balance of interests, hierarchy and caste. Instead of accepting his meals from the village priest, he hires Lakshmi (Shabana Azmi), a low-caste potter’s wife to prepare his meals and clean the house. She is recently married (but without a child) to Kishtaya (Sadhu Meher), who is deaf and dumb, and can’t get work, so he drinks. Given employment by Surya, he is caught stealing his palm-wine, and is shaved publicly as a result (1). He flees, probably out of shame, and leaves his wife alone with Surya, who has noticed her charms from the first day. Now Surya idealistically professes that he doesn’t believe in casteism. He doesn’t care if it upsets people, like the priest or the neighbours. Or later his wife. Because he’s married, but his wife only joins him on the farm when she comes of age. One might think at first that Surya is a progressive man, that thanks to his indifference to superstitious traditions and vested interests, he will testify to a freer, more egalitarian society. That’s where Shyam Benegal’s art and message start being felt: it is not enough to break the rules of the old unjust order. One has to accept the battle that goes along with it. Surya seduces Lakshmi, and explains that he doesn’t care if they’re seen together. She succumbs, because she thinks she’s abandoned by her husband who hasn’t given her the child she so badly wants, and also perhaps because her oppressed social status contains deep inside seeds of revolt which could find an outlet with the rich man’s son, who promises to care for her “forever” and seems up against the system too.

But when Surya learns that Lakshmi is expecting his child, he chickens out. His “revolutionary” attitude vanishes, and he asks her to abort. She wants the child (her seedling), and so is rejected by the caste-bound aristocrat. His transgression of the system was nothing but selfishness and opportunistic interest (in the picture above, one can see, between the two of them, the two pictures he has pinned on his wall: himself and a blonde with a big cleavage: enough to indicate where his real interests are). He’s done no better than his abhorred father, who is also seen entertaining an illegitimate woman. In fact, he’s worse, because even if the father has flaunted social rules by imposing his mistress in the family, he has accepted her son. And they have been given “his best plot of land” – I’ll let you discover the end of the film to know what Surya gives. Let us now come to Shabana Azmi. The first thing that struck me in her superb acting (she's as stately as a queen) was that she doesn’t smile (well, only once!). Thanks to Carla’s blog Sounds Like Power, I watched an interview of her where she explains that she didn’t smile in the film because she thought she had bad teeth! With all due respect to Shabanaji, this is a little ridiculous: if the director had wanted her to smile, he would have made her smile. Or at least, perhaps he found that her not smiling corresponded to something which he wanted to show of the character.

Lakshmi’s seriousness is very much at the centre of Shyam Benegal’s message: in her life, that of a dalit, or untouchable (her husband is a potter, an impure occupation), there is no room for frivolity, for irony, and hardly for pleasure. What can she expect from life? Her prayer, as she marries, is to be granted a child. She doesn’t expect fulfilment of any other kind. Luckily, her husband doesn’t beat her. She doesn’t need, like the other village woman whose panchayat trial we witness at one stage, to leave him because he’s mistreated her. But this was something she couldn’t count on. So when she becomes employed to this young master, she stares at the new reality with distrust, and smiles only when a possible new situation opens up for her. Shabana Azmi lends her intelligence and control to this teaser: a beautiful face which remains rigid and cautious. Certainly some of the strength of the role comes from this choice. By the way, Surya’s wife, Saroj, (Priya Tendulkar) doesn’t smile either, when she comes to join him in the village, far from it. She is his conscience, facing him at the end like a fate. Surya’s egoism and fear make him a very despicable character indeed. For me he is represented by the snake which he is confronted to in one scene, and for which he needs Lakshmi’s help to ward it away. Like a snake, he’s double-tongued and slippery-minded). So even if Anant Nag doesn’t give him a great depth, he deserves some praise for having accepted to play Surya!

The film’s strength comes also from its unflinching commitment to the cause of the oppressed rural workers, whom the rich landowners patronise and worse. At the end, Lakshmi’s cry “the curse of the poor is on you!” is a reminder of the responsibility of the more affluent classes to change their perspective and begin siding with fellow human beings no matter who they are. In India the evolution has been slow. Untouchability has been declared illegal in 1947, in the new Indian Constitution, but little has changed, even today. More films like Ankur will be needed to remove the age-old caste system which many have likened to apartheid. By refusing to introduce songs pieces and a feel-good ending, Shyam Benegal created in the seventies a form of cinematographic protest which was important, but insufficient. “Middle cinema” needs to be rejuvenated and radicalised, perhaps. One last aspect which made me love this film: the attention paid to the life present in nature, which Upperstall.com’s review describes so well: “The sounds of nature are omnipresent - the rustle of leaves in the wind, the chirruping of birds - and the colourful photography carries a warm golden glow”. This evocation of the vibrant presence of the elements, wind, water, grass, night, all these wordless yet so eloquent realities reminded me of Satyajit Ray’s poetry: around man’s intense drama, and reducing it to a sort of sadness, there is the vast hum of the Universe, buoyant with a life which man doesn’t see, and can’t appreciate, because if he did, it would humble him so much that his existence would seem but a point in the flowing current of things. Shyam Benegal’s allusion to this Cosmos around us is nevertheless discreet: let’s say that this committed cinematographer who has a message to shout knows also how to say it in a poetic way. 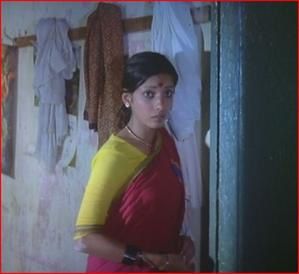