The Stranger (1991) is an atomic experiment. Satyajit Ray imagines what might happen when a normal urban family of three (the target) is bombarded with a high-energy free electron in the shape of a long lost uncle who enters their lives from outer space, and decides to hit them full blast. Will the target be disintegrated? Will it resist, and if so, what changes will it suffer? What by-products will be created in the collision?

Ray knows that we "civilised" people have a number of protections against invasions from alien elements: politeness, customs, a well established identity, social practices, etc. When somebody barges into the fabric of a given society, the society defends itself, like a body reacting against a virus. Our antibodies are: distrust, distance, verification of information, police, prison, even rejection, violently if necessary.

This uncle does not let himself be circumscribed: he will not surrender his independence. He has chosen not to live by the accepted rules of our civilisation. And so he will have to suffer the attacks of the social verification before he can be integrated as who he says he is.

This film is Ray's comment on what makes our civilisation human, or inhuman: what are the criteria which are used to decide that one of us does belong to the group? We often decree that love and trust are the paramount virtues: but are they really, when somebody who is unidentified knocks on your door, and our first reaction is suspicion? Why do we have this urgent need to protect ourselves against anything alien? Where does this fear come from? Why is adulthood so different from childhood in that respect? A fundamental film for whoever wishes to understand humanity and its limits.

(This is the comment I posted on Jaman.com, but I'm not sure the site is still available or usable as it once was!) The theme of the stranger (or visitor) is very common in literature and cinema. Everyone knows Albert Camus’s novel, and the film uses the reference of Captain Nemo ("Nobody") in Jules Verne’s 20 000 leagues under the sea.  That captain is a misanthropist, who combines both a secret about his identity and a “wanderlust” which makes him travel the seas. The theme been used in westerns, for example Clint Eastwood’s High Plains Drifter. It’s also been used in other types of films, where a community is confronted to an outsider who more or less changes the community. E.T.: The Extra-Terrestrial, by Steven Spielberg is an interesting example, because apparently (and this is something I learnt while researching for Ray’s film) Satayajit Ray is an uncredited writer of E.T. I wonder what his role was, and how much he was responsible for.

The source for the theme, from my point of view, goes back to the Jesus-Christ matrix. Jesus is the quintessential stranger, who comes to our earth unsolicited, wishes well to everyone, but almost immediately faces the problem of his identity (see Mark 2,7; 4,41) . He poses the most crucial problem to humanity: do you want to believe in a God who is that close to you? As Manomohan (Utpal Dutt) says: Jesus gets on well with children, women, and simple people; he works miracles for them. But he faces suspicion and hatred from the wise and the powerful. Just the same as Manomohan. The jews have to check if who he pretends to be is really who he is (John 1,22). And then Jesus is rejected as the alien his fellow-citizens think he is. Only after his Resurrection will he establish his origin with some degree of success. Manomohan, likewise, feels rejected, as he leaves the Bose home, and this departure can be symbolically compared to Jesus’s death, and  then Mitra’s second departure, surrounded by the family, resembles Jesus leaving the Earth, and attracting all nations to him (remember when Manomohan says to Satyakit, the little boy of the family, when this one asks him if he will come back: “it will be your turn to come to me”).

A lot of people point out the fact that The Stranger is Satyajit Ray’s testimony, where he delivers his final message, influenced by his anthropological perspective. I’d say this is probably quite right. The film came out the year he died (1992). The no-name theme suits well somebody who has really transcended his community, his country, and has reached international, indeed universal recognition. The film is full of references, notably artistic, literary and philosophical ones, and perhaps the most interesting is the allusion to Greek philosophy, especially Plato, in which thinking takes the form of the dialogue. In Plato’s dialogues, one tries to wrench the truth from Socrates, who successfully demonstrates that those who thought they knew in fact know nothing and are victims of prejudice. Socrates too claims not to know the truth; he talks with his contradictors to make them realise it cannot be found only by cross-examination. Often the quest meets a dead-end, which will make debaters realise that to find the truth, “it takes time”. This is what Manomohan says, about the fact of knowing someone for who he is. The process is parallel to Socrates’ technique. It is only by taking the time – and pain - to realise that what you knew was false or incomplete that you can start again, and the truth will come to you (see also here). 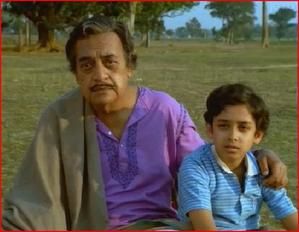 One particularly pleasant aspect of the Stranger is Ray’s insistence on children. Of course Uncle Mitra is a grown-up child, and his main opponent, businessman Sudhindra is the typical, perhaps caricatured “experienced” elder. Innocence vs Experience. The acclaimed scene where the Uncle explains eclipses and the stupendous coincidences in cosmology (something several scientists themselves agree is close to miraculous, or “magic”) is great. This is what physicist Trinh Xuan Thuan says:

According to the anthropic principle, the universe is fine-tuned to an extraordinary precision for consciousness to appear. One must realize that our universe is determined by four basic forces and about fifteen numbers which are called physical constants. The basic forces are gravity, which keeps the planets circling the sun and our feet on the ground; electromagnetic force, which makes it possible for molecules to combine and form strands of DNA; the strong (nuclear) force, which binds protons and neutrons together to form atomic nuclei; and the weak (nuclear) force, which is responsible for radioactivity. As for the numbers, they include the speed of light, the mass of a proton, the charge of an electron or the gravitational constant. The value of these numbers has been determined with great precision: light travels at 300,000 km per second. Why 300,000 km/s and not 3 m/s? We have no idea why. We were given these numbers and we have to live with them. It takes a child’s mind, I’d say, to accept theses realities as something more than just fact. The philosopher and the child have in common the ability to see beyond the appearances, and question reality. Why is there something in this universe, and not nothing? (This was Leibniz's question of questions) Where does it come from? The purely rational attitude might reject these interrogations as non-scientific. From the strictly technical side of science, this is true. But scientists are, and must be, human beings as well. They cannot (or should not) refrain, after having carefully done their best to answer the how question, refrain from asking the why question. Certainly that’s what Ray does. He even asks the “why don’t rational individuals ask themselves the why question?” Are they afraid to admit that the truth lays far beyond them? 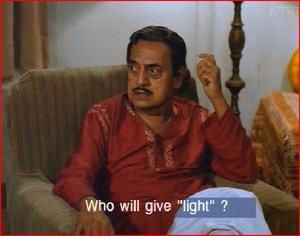 One of Ray’s answers comes from his development on civilisation and barbarity, during the long speech that we witness between Uncle Mitra and Sen Gupta, the shrewd intellectual who comes to question him one evening. The conversation rolls on such subjects as - can we call flesh-eating primitives civilised? Can we accept polygamy as civilised? Confronted with these questions, our stranger does not hesitate. No, he says, all human practises are not humanising, there is an element of barbarity in primitives cultures, notwithstanding other elements of accomplished art and technology (the example which Manmohan gives is Altamira’s bison, the source of his admiration for primitive forms of culture). But he cleverly (Socrates-like) returns the question: our own civilisation, can it be said civilised or superior in terms of moral and educational progress? Is it civilisation when one man can, by pressing a button, send missiles that risk destroying the whole planet? One could add, is it civilisation when human bombs make themselves explode in open-air markets, outside schools? Is this humanity civilised when it tortures, maims, eradicates? Should we not prefer a more primitive form of humanity? What is the use of Michael-Angelo, Mozart and Einstein, if humanity destroys itself? Who is this humanity who kills God when He comes to visit it?