This stunning little movie (65 minutes) made in 1989 by Nabyendu Chatterjee, who died recently (2005) tells the story of Laxmi (pronounced Loki), a Bengali village woman whose husband fell from a roof while she was expecting her first baby, and has remained cripple ever since. She has lost her baby from the shock, and as a meagre compensation, is offered work as a wet-nurse in middle-class families where presumably women have other things to do than feed their children. Perhaps because of the social difference, she is in no position to resist the advances from the “gentlemen” who take advantage of her presence, and she soon finds herself caught in a system whereby if she wants to bring some cash home, and feed an ailing husband, she needs to continue to breast-feed. Naturally this can only be achieved if she delivers again, and so she does. But she has no children… One day, before important elections, alongside with a street-cleaning programme (no more paupers around Gandhi’s statue), she is asked to leave town because (says the police) she’s a prostitute. [1] She then tries to meet the “gentlemen” who formerly used to be pleased with her in more than one way, but all of them reject her, now that the word “prostitute” has been pronounced publicly. She will end up a pensioner in the brothel and the last picture is that of one young man coming to look at her, a young man whom she had lovingly suckled when he was a baby. So we are left at the end of the movie with this question: how do we react to this story of an ordinary woman, who was forced to survive by sleeping with men so as to become pregnant, and be able to earn her money by feeding other women’s babies? Is it an extreme situation? The lacklustre (almost boring) quality of the story seems to suggest it’s not that uncommon. What is catastrophic is the belief, voiced by the husband, that they are “ill-fated”, and therefore have no freedom, no future. But this "fate" corresponds in fact to the social situation where the lower classes are alienated by the higher ones, and where women are the victims of masculine greed, a greed which society tolerates under cover of the culture of authority and respectability. In India, both society and religion (used to?) create a situation in which the paupers and the women are made to believe that their station in life cannot enable them to progress or hope for an improvement. Not only that, but any interaction with the wealthy and the higher classes corresponds to a sort of honour which the oppressed are led to believe is bestowed on them.

Nabyendu Chatterjee was interested in exploring what constituted social morality in the society where he lived. That any society’s morals have a surface which is denounced by its below-the-surface, is perhaps rather ordinary. But this surface is more or less resistant. This is what he has to say: “Our value system is brittle, so thin. Give it a little push and it shakes and crumbles.” Nabyendu Chatterjee as an artist and social being is being tormented by various social codes, nearly cobwebby and flaky. We are given to understand by the director that our society is based on certain values, often conventional or otherwise extremely modern, but not always on something orchestrated that stays even after it receives a thud.” (…) He seems to suggest that our so-called valued personal feelings help form our judgments based on edifice which itself is flossy, brittle, immoral. And you need to hit it hard.” Here he sounds something like Spaniard maestro Luis Bunuel who once declared, “Morality, middle-class morality is immoral for me.”(Link) Why is the value system so thin? What makes it crumble so easily? Where’s the missing cement? Or the backbone? The men (politicians, men in comfortable social positions) which exclude Laxmi because she’s called a prostitute remind me of that scene in the gospel of St John where Jesus defends the woman they bring him under charge of adultery. And what about the beggars who had found shelter under Gandhi’s statue, and who are thrown out under the pretext of "cleaning it" for visiting politicians: isn’t this an awful perversion of his message of equality for all? Chasing the beggars whom Gandhi had precisely said were those who needed most protection and consideration, because their presence sullies the grandeur of a nation celebrating the 40th anniversary of the country’s Independence? But one must ask: independence from what? Nabyendu Chatterjee’s only answer is: independence from what Gandhi had fought for, and died for. Not only is India forgetting Gandhi’s heritage here, but it is in effect refusing it, trampling on it.

What is missing is clear: a set of values based on equality and respect, not outside morality and respectability. A system of justice where those who are wronged are avenged (the movie’s title seems to mean the Avenger, or the axe of Parshuram - see this link – but I’ve not able to ascertain the exact relationship between the Vishnu-related avenger and the movie. Could the film itself be that avenging axe? See further down). This code of values would rely on the intrinsic value of each individual, as taught by Christianity and Gandhism, where every man and woman has the same value, regardless of their origin and social position. Any system where people are subjected to established or institutionalised differences is wrong and unjust, and must crumble because it disregards the essential value of each man and woman. One particularly intense scene is when Laxmi, reflecting (as we understand it) on her past, and having just remembered (or dreamt about) a night meeting with the community doctor, who came for shelter in her hut from the rain and get a little more too, is awaken by her panting husband who, feverish and corpse-like, seems to be asking for breath or life – we know he’s suffering from some chest illness, and will soon die . But the way the scene is shot turns him into a sexually famished ghost who, feverish, shivering in the dark, caresses her face, and looks as if he's in need of something he (unlike all these other men who take it by force) knows he cannot have: he’s been sexually impotent for 18 years now. She fondles his cheek in return, apparently taking pity on him; but all he can do is retreat in anguish, trembling, his eyes bulging, leaving her flesh to its unreachable femininity. He is her husband, and poverrty and illness  have deprived him of  the one pleasure he could have in life, while so many other men steal it daily from his wife, who can neither give it to him, nor fight against them. This scene of human need and sorrow is so powerful one wonders how the film can have been neglected. We have a haunting representation of the fullness of sexual desire which is more than just embarrassing (because so intimate): it’s very incredibly daring and profoundly moving. 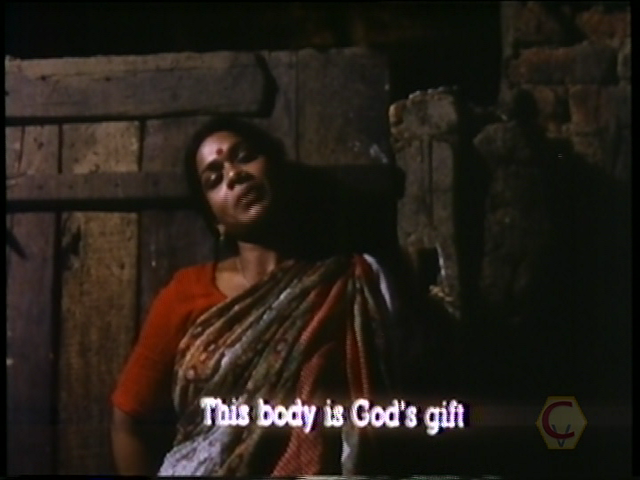 The scene is also creative from a cinematographic point of view, and its meaning goes even further than what has been said above: in the "dream", Laxmi has just told the doctor “this body is God’s gift, I’ll carry on as long as I can”. We don’t know exactly if she’s referring to her nursing of his child, but the double-meaning of her words implies the anticipation of sexual pleasure.  Here our thoughts rush back to her husband, who was perhaps asleep somewhere in the hut. What’s happening is the director’s choice to show us a woman anticipating sexual and physical pleasure, and understanding and accepting it as God’s gift. We know of course she’s using her body to survive, it’s the couple only source of income, but she says the sentence with such a smile that we realise she’s finding fulfilment in lovemaking, socially probably as much as otherwise.  She accepts that “love” from the doctor and the other men, and we feel she would like to give it, if she could, to her crippled husband.  She has tasted its flavour, and knows what her husband misses, and tries to give him what she can. (The old Adam and Eve sharing of the fruit is twisted). Such suggestiveness is so strong that one understands why centuries of so-called civilisation has turned women into witches, stoned them, shut them up, burqa’d them. Men simply cannot resist that power. The director is choosing to picture a woman’s acceptance of her desire (even if it's in those special circumstances), whereas 95% of the cinema does the opposite: we always have masculine desire in front of us. All this brings to mind the figure of the nurturing Mother, who is present at birth, love-time and dying. The movie indeed asks this question: what is motherhood? Who has the right and dignity of being called a Mother? Is motherhood only the well-established status of the family woman with children? Parshuramer kuthar answers: no, a mother is not only a woman who has given birth; a mother is any woman who has given life. Laxmi claims that title in the film, and her drama is that this title is denied her. She has lost her child because of the shock of her husband’s accident. And, either because she can’t have any (a nurse says at one point “none of her issues survive”), or because having children would mean losing her job as wet-nurse and endangering her household’s subsistence (she would then be technically guilty of infanticide) – the movie isn’t absolutely clear which is the case – she doesn’t have any other children of her own. But she claims to be a mother: that’s her point, when she defends herself in front of all these Babus who might help and prevent her from being banned. And, even if she’s guilty of infanticide, isn’t she first and foremost a victim of poverty and discrimination? Isn’t she first and foremost a victim of masculine greed? She should only be condemned if all those middle-class profiteers were too. Because in fact, by perpetuating a hypocritical system which advantages them, they are the real criminals.

The avenger… Perhaps an interpretation of the last picture of the film contains the theme of revenge: We see Laxmi in the whore-house, standing at the open window, with her big breasts pressed against the bars, and she seems to say: “Okay, you treat me as no more than a prostitute. You have locked up me in that role. But look, my breasts are still full of that life-giving milk. If you come and enjoy me, know that you will make love to a feeding mother. If you aren’t ashamed of turning a feeding mother into a prostitute, then come on up. I am waiting for you. This is my revenge.” Up to a certain extent, isn’t Laxmi THE Mother? She has no children of her own, but she’s fed scores of them; symbolically, she could represent all mothers. One last remark: I am indebted to induna.com for actually having seen this superb movie. Along with a movie I had ordered, they sent me this one with the indication: “Namaste friend! I am a free movie on my journey around the world. Please watch me and pass me on to someone you trust will do the same”. Are you that trustworthy friend? If so, don’t hesitate. Leave your info, and I’ll send you the film! To check their policy, visit this page: http://www.induna.com/sf

[1] Sounds familiar? Programmes where the combination of mendicity and prostitution are banned from sight are common in various countries