What is the soul of poetry? Isn’t it a kind of universal music which, universal as it is, springs fresh and clear from a homely and unique source of inspiration? When Tagore writes:

I hear a very Indian voice evoking a king’s palace and telling us that even if it is made of gold and silver, in the reality of whispering truth it stands “at the corner of our terrace where the tulsi-plant grows”. The tulsi is that traditional little tree in the centre of the courtyard, the same aromatic plant we in the West know as Basil (etymologically the king) which means immortality in Hinduism, and is associated to Lakshmi, the home-Goddess, and Sita the perfect wife (see here). So this evocation is localized, but universal too because it comes in the shape of a common mystery: nobody knows where my king’s palace is… and if they knew, it would vanish into the air… this palace is really a corner of our terrace where the sacred tulsi stands… All lovers of poetry can recognize the theme of knowledge, unattainably noble and intimate, yet simple and close at hand, present in the secret of everlasting life. Why I have started with Tagore and tulsi will hopefully soon come clear in this presentation of Ritwik Ghatak’s classic masterpiece Subarnarekha (1965) which tells of the dramatic life of Bengali refugees near Calcutta in the aftermath of the Partition of Bengal in 1947. We start with the life inside a refugee camp where two teachers, Haraprasad and Ishwar, are setting up an Indian school for the camp’s children. The first will teach Sanskrit and Bengali, the second English and History. This is to be part of a newly established Hindu settlement of refuges in India’s West Bengal province. From the start one feels the anguish of exile and homelessness; the theme of the lost home is constant. We focus on Ishwar’s “sister” (is she really, though, because she calls Haraprasad her brother too), young Sita, and Aviram, the boy of a low-caste woman from Dacca who tries to get admission in the camp, but is refused, because of the ever present Hindu caste system (“If we can’t keep the difference, what are we left with?”). But an incident happens: some thugs of a local landowner come to move the refugees off his (uncultivable) lands, and Aviram’s mother gets caught in this batch of people. “New Life colony” starts as all new settlements, amid deprivation, hope and strife. Around the period of Gandhi’s assassination (which makes Haraprasad say “somewhere we have been duped”), educated Ishwar soon gets a job offer from an old college friend of his who works in the neighbourhood. He is to supervise some business at a foundry in a village (Chhatimpur) in the country. The pay is meagre, and he hesitates, but then accepts for the sake of the children. Haraprasad libels him as a coward and a deserter. For him, he is leaving the cause of the foundation of a new Bengal. But Ishwar isn’t an idealist; he’s an anxious, meditative, withdrawn sort of man. The first part of the film shows him in a very positive light, full of care and warmth, smilingly attentive to the children he has to look after, and very close to them. He sends Aviram to college and makes sure that the boy doesn’t mind; he agrees to have Sati instructed by a music-teacher. He keeps Aviram with him in spite of his low-caste, and only changes when his boss, a very religious man, has noticed the problem and this threatens his job. But from then on, things alter. Ishwar becomes caste-conscious and this triggers a series of transformations around him: Aviram, who has fallen in love with his childhood friend Sita, is forbiddent to marry her, and has to leave for Germany to study engineering, whereas he wants to be a writer. Ishwar, who has recently been promoted at the foundry, starts asking suitors to come and see the girl. In spite of fierce opposition from Sita, he hastens the wedding day, but before she is tied with her brother’s choice of a husband, the two young lovers run away to Calcutta, where they start a family. The story resumes some years later, Sita now has a 5 year old boy, Binu, and Aviram finally finds a job as bus-driver (writing hasn’t brought him anything – a scene at the beginning, where we saw a rookie journalist being asked to cheat if he wants to stay in the job gives the key to this passage). But then a catastrophe occurs: the company gives him a brakeless bus, and he runs over a little girl. The angry crowd burns him alive in his bus. Sita stays alone. All this time back in Chhatimpur, near the Subarnarekha river, Ishwar has been on his own, guilt-ridden and sombre. One night, he decides life isn’t worth living any more. But he’s interrupted by a ghost from his past: Haraprasad, who’s lost everything as well and has come to see the old “deserter” because the latter has the advantage of being much wealthier than him. He stops him from committing suicide, and takes on a “devil’s” tour of the night-life in Calcutta. Ishwar, who had been dejected and miserable, but had kept his honour, now loses that in despair. He leaves the river’s edge to follow his old enemy and tempter. In Calcutta, half lucid, half raving, they transgress all the rules, they party, drink, revel end up at a brothel. Ishwar has miraculously driven there because his glasses have fallen and been broken in a bar. At the brothel, he is led to a girl for whom it’s her first client (a well-sought after bonus), and he doesn’t see who she is. The coincidence (but with an obvious heavily symbolical significance - see here) is that it’s Sita, who of course recognises him immediately and slices her throat before he can touch her. He then recognizes her and then breaks down madly, accusing himself of having murdered her. The epilogue happens two years later, after a legal struggle has proven him innocent of his sister’s death, and he gets to look after Binu. He goes back to Chhatimpur, and even if he learns en route that he has been dismissed, he nevertheless continues onwards towards the new home that he has promised to give little Binu, and where the boy hopes to be reunited with his mother and father. What a grim story, one might say. The director explains (here) he had to face his contemporaries’ opinion that he’d shot a pessimistic, desperate portrayal of India’s origins, and we can understand why. The movie didn’t meet with success, and had to wait for the audiences to mature and see its worth. What then has ensured Subarnarekha’s fame? Why is it recognised as one of Indian cinema’s undying masterpieces? I believe it’s because it has a universal content, and that what is shown of West Bengal’s origins can refer to all stories of origins. There is an archetypal value in Ishwar’s foundation of a new home away from his own, with his two little ones who (like in Ray’s Pather panchali) discover and recreate the world’s beauty with their childhood’s innocence while the grownups struggle in the fallen world of men. But more than Ray, Ritwik Ghatak insists on the opposition between the potential of recreation and the destructive forces of society. The opposition between youth and middle-age is thus fierce and unforgiving. It is represented by the feud between Ishwar and Sita, which begins when Ishwar believes he has to separate her from her lover, and he reverts to violence whereas until then he had never had with her but tenderness and affection. The conflict is so unexpected and sudden that the spectator has to bring in another subterranean force to explain his reversal. We have this sublime scene when Sita agrees to represent Ishwar’s mother because he says he has lost her, and she bends over him and, lover-like, brushes the words against his ear, and soon after there is this exchange of iron-cold stares between them. Ishwar’s kind face becomes frigidly fierce, and Sita shows hers in the achingly false bridal attire which she puts on to show her beloved brother how changed he has become. In Subarnarekha, a lot happens on the characters’ faces. The facial symbols are strong, from the nightmarish apparition of the harlequin in Sita’s dream-like childhood, to the evil transformation on Ishwar’s face in the second half, and Sita’s final transfixed Fear. There are also the timeless instants when Sita sings and the universe stops for a time at her voice. Then film explores the silence of closed eyes, for example when, in a scene of absolute purity and beauty, the two lovers, both grown and yet delicately chaste, go out in the woods and, sitting among the forest of frail white trunks, are felt to rise inwardly towards their common sky, and we know this is their revelation, this is when their soul blooms and its perfume wafts out towards their mate. Certain rare flowers in high lost places also have this fleeting moment of fecundity when their species can propagate before shutting back into undifferentiated greenness. Those who are lucky to witness this moment keep it as a beautiful secret. 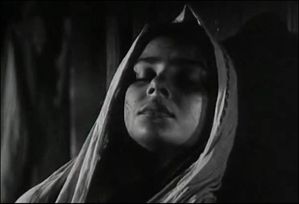 The tragedy of the story (which transmutes into its hope) lies in Sita’s curse: it seems that from the start, she is doomed to grow up too fast, and confront the sinful reality of violence, desecration and death. Her figure, saintly and achingly beautiful, falls and suffers so much that one wonders if and wherefrom any redemption might come. The forces of evil erupt and seize Ishwar so fiercely that one is left with only tears and desolation, it seems. Have exile and loss and absurdity been too strong? Have their poison been too virulent? The author, most surprisingly says no, life, struck and cripple as it is, continues to flower and bring forth its immemorial hope that one day, the garden will again be open and men will live there in peace. Little Binu represents this frail new life, with its amazing resilience. Finally Subarnarekha, which documents the calamity of displacement and exile, touches because this historical account rises to a universal and beautiful portrayal of men exiled on Earth and forced to live the violence of birth, love and death. There is little freedom in such a life; one quickly thirsts for the eternal home which was lost long ago, and there is barely enough time to see all the beauty of life before it shuts your eyes once again. The winner in the cyclical movement of birth and rebirth is Life itself, and humanity in its essence, more than the fragile individual: « Victory to man, to this newborn, ever living ».