Mother India…That title resonates like everything a Bollywood-lover should pine for: aren’t we all somehow in love with Bharat mata? Aren’t we all her children up to some extent? As for me, I’d say that ever since I’ve been writing this blog (more than 2 years now), it’s been winding up to Mother India. First Nargis is one of my great heroines, and if I’ve come across Mehboob Khan’s movies only once so far, it’s enough to say he’s one of the greatest. This epic movie is like his final tribute to the Cinema: after a long career of about 100 films, and mastering his art to the full (we’ll detail this later), the master gives us his grandiose masterpiece.

Where do I start? Perhaps with this line: “How can a mother sacrifice her children?” wails Radha, at one point driven almost to insanity through poverty and humiliation, and almost forced to sell herself to feed them (we are spared that extreme, but the scene in the usurer’s house is tantalizing enough). And yet she will do it, she will kill her son, whose murderous frenzy obliges her at the end of the movie to choose social order over maternal love. The intensity and tragedy inherent to Mother India is contained in this contradiction. The Mother who has fought like only Life itself could struggle to survive and provide for its very existence, this mother will be the agent of Death, death of her own life, death of her own child. This Arch-Mother will become the mother Land, the Mother of Society, the mother of Culture. She will not flinch when her own blood, her own Nature has become corrupted by hate and craziness: she will choose order, the community, and the honour of the village. And out of her sacrifice a new Life will flow (the red tincture of the irrigation waters which she inaugurates at the end), a better life, a life where her children by the thousands can live in peace and prosperity. But, what have we got here? Doesn’t that sound like a political platform? Or some naïve reformist propaganda? Is this 1957 film nothing but that? The movie’s opening tribute presents us with the communist Hammer and Sickle symbol… Well, we shall see that indeed, the political stance is overwhelming. But, but… so is the artist’s creativity, thank goodness, and so are its symbolic and allegorical values. So let the drums roll, here we go! Mother India!!

We start with the Brave New World of agrarian Progressivism. Wow, now that’s what I call a message. That opening scene with Radha sitting on the clods, absurdly close to passing caterpillars and tractors and road-making engines, where dead serious Indian citizens are standing straight and looking towards their destiny! And then as the story unfolds, Radha’s family epic where she is no less than a Stakhanovist farmwoman (“we shall slog”, she tells Birju in the end, trying to make him understand – too late alas – the value of the socialist creed of redeeming Labour). Throughout this first part, she rises to Bolshevik statue-like proportions, a monument to the faith and courage of the People in the face of Adversity and Capitalist profiteers (well, Sakhilal the money-lender is hardly a fierce symbol of America, but I wanted to carry on with the rhetoric). We see her stride through the sun-drenched fields, sickle in hand, hair blowing and preceding her man, as in the best paintings of the collectivist era. At one stage (during the flood), she’s a modern Samson, a Pillar of Strength holding up the two sons of the Nation on her broad shoulders and unflinching character; later she’s a Christ-like Martyr of the people’s Revolution, as, eyes shut, tied to her Plough-Cross, she plods along the Calvary fields with her two boys behind looking up in awe…

These socialist icons in the film turn it into an amazing testimony of Communist propaganda, at a time when India was young and hopes were high after Independence. Strange to notice, perhaps, given the status of Mother India as a major work of art: one would have perhaps expected it to rise above allegiance, and influence, rather than be influenced… that much! Still, I think it transcends politics thanks to its sheer artistry. Not only does Mother India establish the defining epic of early Indian cinema, not only does it visualize the universality of the mother figure as a symbol of Life and Land: but it contains cinematography at its most creative, its most evocative. It doesn’t always avoid clichés (those flaming sunsets, the horizon shots), but what it does have – that’s visible from the start, it’s one of the movie’s great assets – is a masterful sense of framing and colouring. Mehboob Khan is a Painter. Very often the scenes are intuitively balanced between volumes, lights, colours, movements; the composition of the action is great to watch, if you decide to do so. A keen sense of human bodies is also at work; Khan knows how to take advantage of them. The faces are a special subject which the director knows precisely how to use. He places an expressive face next to a half-hidden one, so that the “lit-up” one seems to comment on the shaded one (see above pic); sometimes close-ups of two or even three faces are filmed with an attention to their respective powers – we feel in the calculated distance separating them, or the closeness, something of the story happening on the screen. And when Mehboob cuts a face so that it’s partly outside the screen, he does it with a precise purpose: the symbolism of the character is thus shown to exceed the narrowness of the movie itself (Radha carrying her Cross), or its violence, expressed in such a way that it is only half suggested, giving it additional power because we must imagine the unseen part (Birju in the flames). I would like to touch the question of feminism which some bloggers have already discussed (see on Carla’s). Is the film feminist? Is Radha the single mother a model of the liberation of women, or is she manipulated, and used as a figure of oppression, sacrificed to the gruelling chores that only women will do? Not to mention the use of her sex-appeal, surprisingly present in the movie at key moments. Mehboob Khan doesn’t always shy from the escapist pleasures of representing his actress as a goddess with all her earthly charms. Radha is thus made into a satisfyingly complex character, she’s certainly virtuous, she’s loving, courageous, resistant, she has a sense of humour, a beautiful dignity. But she’s also shown to be a woman with her feelings and needs, her limits also. This is what I’d say: certainly for its time, Mother India is feminist. Imagine, Radha actually waits for her husband for the whole film! It would have so easy and so satisfying (from an escapist point of view) to have Shamu (Raj Kumar) come back, the desired male, the idol of the family, the focus of society. But he just doesn’t, and that’s one of the movie’s strengths: it doesn’t pander to the spectator’s desire in this respect. Radha remains alone, with her desire, her pain, her frustration, as the story says she should. Then there’s her denunciation of the religious support offered to women by “the goddess who carries the burden of the world”: Radha sneers at that fable, and taunts whatever goddess there is. She is indeed carrying everything, there is no goddess somewhere helping out. And finally, who knows whether the director’s tribute to Nargis’ wonderful features and figure (positively sultry at times) shouldn’t also be looked upon as a vindication of women? I don’t feel she is manipulated too much, and even if this last point is subjective, imagine what a modern-day director would have done… There is another theme worth speaking about in Mother India, that of education and knowledge. I suppose you remember the scene when little Birju goes to the teacher’s class in the beginning; he’s sent by his mother in the hope that he can one day read the usurer’s books and perhaps reduce the injustice that his family has been subjected to. But what does he do? He fools around, and is sent back, and tied up to a post at home, without anything to eat. It looks like he doesn’t go back to school, because later, when he falls in love with the teacher’s daughter (whom as a dacoit, he sees married at the end), and tries to learn the alphabet in front of her, he cannot but criticise knowledge as cruel, since it has wreaked such misery on his mother and her sons. For Birju, knowledge enslaves; and deprived of it, he will have no choice but to resort to violence, which also enslaves. Clearly the film condemns usury and such immoral dealings, but rather ambiguously it makes no great effort to uphold Birju’s rebellion against this injustice. Instead, the rebel is killed to maintain peace and justice, a justice based on legal theft! 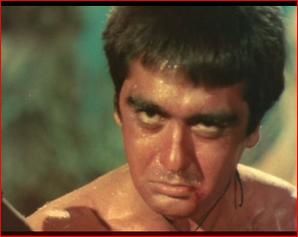 So what is upheld in Mother India? “Honour”, and the courageous acceptance of one’s destiny. That’s what Radha stands for, that’s what she is crowned for. That's also what her eldest son, Ramu (Rajendra Kumar) represents. So I’d say that’s where the film’s revolutionary stance stops. And where tradition steps in. According to the Russian/marxist model of revolution, women like men can take part in the overthrow of the feudal society; their motherhood doesn’t come into play. It seems the Indian model favours another role: a woman cannot change everything, a woman is praised first and foremost as a mother and defendant of social values, and only then can she, as a worker and element of economic and social change, improve society and the individual (you might check what Shweta has to say about the “Bhartiya naari”, in relation to this vision of the Indian woman). I wonder if that conservatism is why the film was so successful when it was made… and why it is perhaps less so now. Indeed, almost nobody, from what I’ve seen at least on the net, has taken the time to deal seriously with it. There are very few reviews, apart from Upperstall (short and doesn’t contain much except praise for Nargis’ performance) and Carla’s (good, but short). On Bollywhat, they’re busy figuring out why Birju’s face is so red (sorry, this link now doesn't refer to the debate - Bollywhat has been restarted)

Below, the greek goddess's profile and above, the socialist composition, with the red flag!