After I saw Ganashatru, which Satyajit Ray shot in 1989 (see Ray’s website), I noticed that it was based on Henrik Ibsen’s play An Enemy of the People, and some good soul has uploaded on YouTube Arthur Miller’s adaptation of Ibsen’s play, so I watched it too. I haven’t read Ibsen’s play (it can be read here), but from what I gather, Miller’s version is quite close to the original. Ray’s adaptation, on the other hand, shifts a number of things: we’ll come to this bye and bye. But the first thing I’d like to underline is the strength and vibrancy of Arthur’s Miller’s version. It really does justice to the aphorism which I read about Ibsen being “the best dramatist since Shakespeare”, according to one critic. The play contains a very modern statement about democracy and public opinion, and an examination of the value of truth when it is opposed to public interests, which I have rarely seen so forcefully dramatised.  And so I have to say that Ray’s film, in spite of its worth, does not rise to these heights, and therefore, Ganashatru comes as a slight disappointment. Naturally I am able to say this because I am comparing the two works. But I did feel a slight unease at the movie’s lack of conviction, and now I know I was right. On IMDb, someone who wishes to put Ray’s effort in context, writes: “The movie is a slap on the face of such so-called educated and a stark warning what could happen if religious sentiments of the people is misused or abused to achieve personal goals, a fact India would so painfully be facing within just 2 years after the release of the movie. Ray could see what was coming, and like all true artists for whom his work is more than just art and in reality a medium of communication has tried to fulfil his duties to make the people aware of what he saw was coming.” 1991 was the year of the assassination of Rajiv Gandhi by a Tamil activist: could the author be referring to this event? The story of Ganashatru consists in a scientist’s fight for truth against the forces of bigoted religiosity and arrogant business. Dr Gupta discovers that the holy waters that attracts thousands of pilgrims at a nearby temple, is contaminated because of its proximity with a tannery, where dead animals are used as raw material. He double-checks his first findings, and gets the objective backing of a Calcutta lab. Then he sets off on his duty to tell the authorities as quickly as possible. He’s so sure about his contribution to public interest that he starts celebrating, and his friends with him, including a newspaper editor who vouches his paper will be published by his local newspaper. 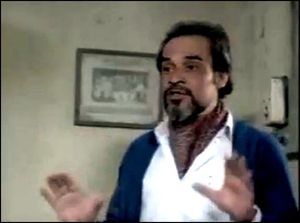 Then the scene changes, with Gupta’s brother, Nichrit, taking center stage. He’s the unscrupulous owner and beneficiary of the religious fervour at the Temple. For him, contaminated or not, the access to the holy waters must continue, and will continue, brotherhood notwithstanding. He’s encouraged in his attitude by the village priest, who comes to threaten Dr Gupta that any interference with the water supply is tantamount to a crime, because anyway, being holy the water cannot be contaminated. At the root of the opposition between the two parties, there is a radical difference as to what is, or what is recognized, or accepted to be, the nature of reality. Science has one answer, faith another. And if science cannot immediately, magically disprove belief, then faith will prevail. And here we are talking about invisible bacteria, figures on a little piece of paper from a faraway University laboratory and patched-up information about pilgrims who suffered from intestinal problems. Contrasting this flimsy evidence are the thousands of devotees thronging to the temple every day in search of salvation, the increasing popularity of the village, the revenues accruing to the establishment, and the certainty of doing God’s good works when stopping a blasphemous atheist. But Dr Gupta is confident, in this battle of interpretations, of having the independent press with him. Some friends also remain faithful, among which a drama student of his relatives. Well, this doesn’t last long, because Nichrit manages to turn the press around. Understanding that whoever controls the press controls the minds, his totalitarian approach needs all form of free speech to uphold his interests. He proves them, and especially the editor in chief, that their future lies in the businessman’s hands, and they soon realise they can’t go against “public opinion”, which is normally what a newspaper aims at shaping! So they let him down. Undaunted, Dr Gupta decides to organise a conference to tell the population about the health risks at the temple. His brother reminds him he is the one who gives permission to stage public meetings. And, when in desperation, his brother organises a personal conference at a private venue in town, who turns up? Of course Nichrit and the newspaper editor, who cleverly manipulate Gupta and demand that he do not speak and be declared “the enemy of the people”. He is defeated, goes back home and there he examines the situation (his daughter, a teacher at a local school, is dismissed and the tenant wants them to leave), when finally a wave of support is heard outside: the group of young drama students who stage a march and cry “Dr Gupta zindabad”. Hearing this, the isolated and humiliated doctor brightens up: he’s not completely alone. If some of you know Ibsen’s play, you will have noticed a number of simplifications, the most important of which being the shift from the original showdown between the two brothers, a truly phenomenal combination of ideological sparring moves on both sides, to a more feeble opposition of dogged superiority (Nichrit) confronting a disbelieving and retreating Gupta. In the original, Dr Stockman (Gupta’s model) had an indomitable clarity, and showed the talent of a general manoeuvring what remained of his decimated army: until the end, he rallies those who believe in common sense, and even this finally restricts itself to his family and the evasive captain, clearly he stages a moral resistance which Dr Gupta doesn’t know how to muster. Stockman is alone at the end, but this cannot make him waver: the truth is still greater than all humanity weighing against his conscience of it. Ray’s Gupta needs “the more upbeat ending” that changes an entrenched soldier’s long wait into the promise of an unexpected revolution. My description of the video quotes Ray saying “there is a feeling if Ganashatru of coming from darkness into light”, and indeed one can see why Ray wanted to partake this message in 1989 India, where religious and nationalist intolerance was still rife. In Ibsen’s play, the scientist’s isolation at the end underlines another confrontation: that of the fighter for moral truth in a society contaminated by conformism, hypocrisy and prejudice. Ray says also that “things have changed since 1882, things like investigative journalism. In my version, the assistant editor of the newspaper leaves his job to become a freelance journalist and fights for Gupta.” Indeed, this is an important element of Ray’s adaptation; still, he doesn’t use the idea all the way. A proper handling of it would have meant, say, an article about Gupta’s fight in Time or Newsweek which would have ridiculed Nichrit’s plans and exposed his fraud nationally or even internationally. But none of this happens, the scandal isn’t powerfully denounced as it should have been, and so we remain within the suffocating world of cultural prejudice nevertheless. Does this mean that Ray didn’t believe in global answers to local injustices? Did he not think that a worldwide community has some power to enlighten local backward situations? Perhaps he was too close to his own people to rise to the status of an Indian Oliver Stone.