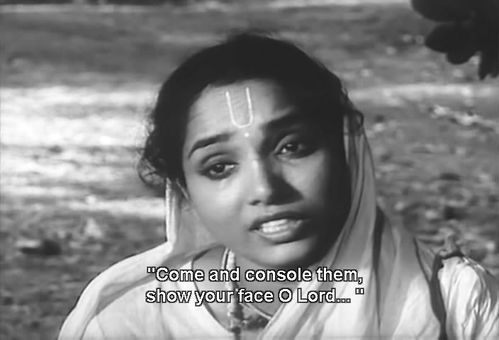 Contrary to what many people think, love isn’t a simple passion. First many things, such as the family, the social situation, the history of the two lovers, etc. combine to create the particular context of the relationship, but also in itself love challenges who you are, your self-esteem, your need for recognition, your ideals. So that when, for example, Bollyviewer (in an otherwise very pleasant review – check her captions !) questions Devdas’ desire for self-destruction (« a man destroying himself for LOVE! » she exclaims in utter disbelief), I believe one has to give the film the credit of complexity and suggestiveness and not rush to decide that Devdas’ downfall is only artistic quirkiness. Bimal Roy’s celebrated movie (from 1955) possesses the charm of both a realistic and imaginative story. The leads are fine, especially Suchitra Sen (heavy-lids Paro!) and Vijayanthimala (Chandramukhi), but I found Dilip Kumar (in the title-role) a little aloof, a little distant. Somehow I would have preferred him to be more passionate and romantic. But his coldness adds to the mystery, too. We’ll see that there is perhaps a reason for his stilted detachment. The reviews I read very rightly underline the beautiful cinematography, which shares with Satyajit Ray or Ritwick Ghatak a sense of realistic details (the beauty of faces) and symbolic natural scenes. The songs blend in quite meaningfully - I was reminded of other Bimal Roy films (Sujata, or Bandini, especially) - and most of all there is a delicate attention to the human emotionality through the characters’ desires and frailties. Then there is the Guru Dutt association: Kaagaz ke phool dates back to 1959, and (even I haven’t researched the links between the two films) it seems clear that the anguished later work is striving to recreate something that Bimalji masterfully created with his Devdas: a depth of meaning combined with a balance of artistic beauty that he must have found so satifying that he re-evoked the symbols of Devdas in his lovelorn opus so poignantly. True enough, Guru Dutt has turned his film into an amazing meditation on the cinema, and even art itself. But he’s left enough signs of his indebted inspiration: the use of Baby Naaz and Johnny Walker, the theme of impossible love and self-destruction through drinking, and that mysterious final run towards death, so evocative of what happens in Devdas. What I find profoundly true in Bimal Roy’s work is the opening passage telling of Devdas’ and Paro’s childhood (which goes back to the myth of the gopi Radha that Krishna had elected as his beloved). It’s true because it justifies the lovers’ behaviour later; with their childhood in mind, you look upon them as grownups much differently and you can always relate what they say and do to the bond which united them then. This is something which is not permitted, for example, in Sanjay Leela Bhansali’s 2002 version. Perhaps he assumed that everybody had the original story in mind, and could refer to it without him including this episode in the film. But for me, the answers to the enigmas of Paro and Devdas’ story are to be found in their childhood and so it is essential that we see them as children. For example Paro’s scarring: after having suffered his lover’s rebuke, Devdas whips her face with his fishing rod, saying that from now on, whenever she looks at herself in the mirror, she will see that sign of her pride. From a modern point of view, what an intolerably selfish attitude! How can he do that, just after he has proclaimed his love for her! Isn’t this going to estrange the two of them for ever? No, because, shocked at first, Paro later sees in her scar the indelible indication of her love, and we have this wonderful silent comment she makes, when she goes back to see him later in the film: Had we not seen Paro’s childhood devotion for her Devdas, her fiery independent spirit as well as her forlorn need of his presence when he is sent away, we wouldn’t have given this episode such depth and meaning. One of the film’s most beautiful songs occur just after Devdas’ departure from Paro’s budding life. She meets some vagrant singers and offers them a princely amount of money – Devdas’s money (so we can interpret the song to come from him, to be his parting message) – if they sing for her. What does the song say? That Radha is lost when her Lord Krishna has gone, and that she wishes he would come back. When the song is over, little Radha wipes her tears. She has been wounded by Krishna’s love. This announces (and explains) the risk she takes when, an opened lily, she wanders out at night and crosses the boundary between the two homes to expose herself to him. The scar will thus become the visible equivalent of the stigma she had decided to bear that night, knowing full well it would endanger her maiden reputation. But she loved him enough to scar her name for ever with his. She is even ready to drown if it comes to that. And so when she is really whipped, she accepts the suffering as a physical proof of their eternal bond. Let’s now come to that self-destructive passion which seizes Devdas once he knows that he won’t be able to unite with his beloved (his parents forbid it). It’s true that he has just sent her that cruel letter in which he tells her he never really loved her. Tragedy of the written word! Warned by his conscience, he rushes back to her, and upon seeing her, he tries to retreat and say he wrote the words too fast, and that he now realises he loves her as much as she does: but it’s too late, the words have been heard, and somehow their truth is greater than Devdas himself! And even if this is wrong from the point of view of love, which lives in the present and has the power to re-evaluate past declarations in the light of renewed feelings, for Paro the letter’s words must correspond to Devdas’s real self, otherwise she would never have forsaken him. Through these words she reads him as he really is: fickle and weak, changeable and unpredictable. Devdas’s destiny is one of half-commitments, illusions and hesitations. He loves Paro indeed, but cannot or won’t risk everything for her. What’s strange is that it is only when he has lost her that he becomes absolute. Before, when he could still hope to have her, he dallies, he considers his reputation, Paro’s, his parents’ orders… And because he wants to conciliate things, he breaks the unspoken promise which bonds him to her. Conciliation… Love cannot compromise; love is a tyrant and wants all the lover’s soul. It takes love’s ruin for love to be revealed to Devdas, and from then on he will be enslaved to it. Hence his self-destruction. But which part of himself is Devdas destroying? Isn't it more like a purification (pyre = fire)? What he has done to himself, to his eternal soul calling for its companion, cannot be mended by anybody else; nobody else will take advantage of what he has burnt (he's doing to himself what he's done to Paro by scarring her). Romantic and absolute love is more realistic, in a way, than common, down to earth loving (which on the other hand is easier to deal with!) because it corresponds to man’s aspiration to something beyond him, something of the stars, of the whole universe. Romantic love cannot love twice because life is unique and therefore tragic. Whatever is done cannot be undone! And so Devdas kills himself because he’s missed Parvati’s Love. And yet, mysteriously, it’s because he’s missed it that he finds it. There’s a classic paradox here, which is that of the impossibility of true love. Love is divine and so men cannot hope to partake of it in its essence; the only way they can taste it is if a god descends to Earth and makes them participants of his divinity. Mythologies tell us that this is what happened to men in times past. Men have been created with love inside them, with god inside them, and they spend their life trying to find its hiding-place. And so therefore love has a divine reality which we cannot change, we belong to it. Having lost Paro, Devdas must die to who he once was, and destroy and purify his human social self. Liquor is often moralized as the archetypal dissolver of lucidity, the eternal killer of scruples. But it should not too quickly be equated with sinfulness. Devdas is more a victim than a sinner. His relationship to alcohol is almost like a cure; thanks to it, he burns away his impurities (one might say, his weighty karma); and his sacrifice makes him become a purifier of human bonds. This is how he attracts the attention of Chandramukhi. The tawaif has been used to men of all sorts, she has been flattered by all, but never had she met before one who told her the truth about herself. When Devdas arrives in her presence, there’s a violent rejection of everything she represents. Is it love at first sight? Hardly, with this kind of woman. The story seems to indicate she’s more impressed by Devdas’s attitude towards her. It is because he isn’t attracted to her that she’s attracted to him, following the classic mimetic formula. And his self-destructive descent corresponds to her elevation. He somehow becomes her guru. His burning sacrifice of his love, of his life, becomes a bright fire in her life. Because of his self-denial, she finds a way to her purification; she then participates to his purification. Atoning for her sins, her love earns him the way back to his childhood innocence (whose name is “Paro”). This transparency takes the form of her fight to drive him away from liquor which his tempter friend Chunni (Motilal) draws him back to every time. But the logic of the tragedy needs Devdas to go all the way through the redemption process; we follow his decline as he drinks himself blind in streets before Chandramukhi pulls him out and brings him back to a short reprieve, because soon he’s called by Death’s chariot in the form of a frightfully rushing night train on which Chunni, his bad angel, climbs and precipitates him to his final journey, all the way to Paro’s door that fateful dawn. Before that, we have been the witnesses to the two women’s exchange of Devdas’s care, when, out in the country one day, they briefly and unknowingly meet, the virtuous Paro coming back from his home and the longing Chandramukhi despairing to see him again. It is indeed striking that Paro, after her separation from Devdas, follows as much a beautiful path as he stumbles down a rough and broken one. As if somehow the sacrifice of their love was meant to bring honour and family values back to life, and if the love they could not enjoy has been transmuted into purity and generosity towards others. But the exchange of looks that morning on the country path makes the two women strangely similar. Both are the lovers of an unrequited love, both are menders of a broken heart, both are vigils of a dying soul. Living, Devdas couldn’t love; dying he is truly loved by both. Both become the priestesses of their dying burning Love.

PS: there has been some controversy around that caning/scarring scene (see the comments). Here's an interview of Dilip Kumar which refers to it, in which he states that: "I still cannot bring myself to agree with Devdas, when hits Paro with a stick and says, 'I have given you this mark to punish your pride'. But I played the part. And because the author was good, he turned the most nonsensical idea into sense"