In Sujata (The well-born, 1959), Bimal Roy has made the untouchable touching, adorable an object of disgust, and visible a pit of darkness. I’m not saying that he has made THE unique Dalit movie (I don’t know which one this would be… Ankur?), but for me the character he’s cast as the untouchable in the film, Nutan, is his attempt at visualising on the screen what he thought about any human being: Bimal Roy could have signed this famous Shakespearian verse:

O wonder! How many goodly creatures are there here!

How beauteous mankind is!

O brave new world! That has such people in't!

Man, this divine creature, possesses a beauty which testifies to its origin, and all men, no matter how ugly and deformed, are all as beautiful in the eyes of their maker, who sees in us the divine image (Genesis 1,26), and not the surface, our mortal envelope. But of course, the cinema is the cinema, and even if one might perhaps regret Roy’s choice of the heavenly Nutan, because a plainer heroine would have more easily deflected our stare towards the inner sanctum than she does, nevertheless I believe we can say she displays such a charming modesty, such an delicacy and such a simplicity of manners, in short such a grace, that this way one does not forget that innocence and beauty do sometimes (perhaps even often) go hand in hand, and that man’s divine creational status is made visible thanks to her. And because of the sheer artistry she has put in the role, Nutan is way up there, untouched by rivals! I will not tell you the story, because Madhulika at Dustedoff has done it for me: she summarises mostly the beginning of the story, but it helps to have all the circumstances. So thanks Madhu, but I shall also take the opportunity to thank her because she was the one who enabled me to see the movie, and who gave me the hint as to where to find it.

It’s the story of an untouchable girl, as my DVD cover writes. These persons, according to the Hindu religion and caste system, cannot be touched (cf. Untouchable, by Mulk Raj Anand). If people from the other castes do, they are defiled, and must wash in order to regain their purity. Such a phenomenon is common in ritualistic religions. In ancient Judaism, it was also defiling to touch a leper, or a woman having her periods, for example. One might understand why the contact with the leper was proscribed, but in fact it is the same thing as the other cases: any apparent illness or physical disorder was believed to be a sign of divine rebuttal, and touching meant not only being contaminated, but also become excluded from the community, because the sick, the cripple and the destitute were visible proof of an inner sin against the divinity. Siding with them meant incurring the divine wrath which caused their sign of exclusion. Touching somebody in primitive societies (of which our more evolved ones still inherit) also has ritual potential. Medical and magical powers often travel through the hands, which are a way to bestow authority and inheritance. Touching means asserting the reality and resistance of whatever is touched. In official ceremonies, there often is a sign by which the hand signifies the contract, or the alliance. And so naturally in rites of passage, the hands are endowed with the power which enables them to perform what is intended by the rite. I am not an expert in these matters, but perhaps hand decoration, in various cultures of the world, has a significance in this respect. At any rate, touching always means an influence, a power, an acceptance which integrates the receiver in the community. Being untouchable does the opposite; it prevents the person from any integration, and forces untouchables to be touched by other untouchables, thus doubling their curse. When Sujata is first touched by Adhir (a Brahmin, played by Sunil Dutt), she winces; the hand to shoulder contact means of course man to woman contact, with all the sexual load attached to it, but it’s also a transgression of another kind, which cannot be experienced as pleasurable: anguish and fear are increased by this simple gesture. Whereas humanity resides in a meaningful (and not only emotional) practice of touching between human beings (such as it is expressed by the rites we have mentioned), the existence of untouchability has perverted this human bond that builds trust and confidence into a barrier which separates people. Touching normally enables a proximity, a language beyond the words; untouchability (or any kind of apartheid for that matter) recreates the distrust and fear which was the consequence of the Fall in the garden of Eden (Genesis 3,10). 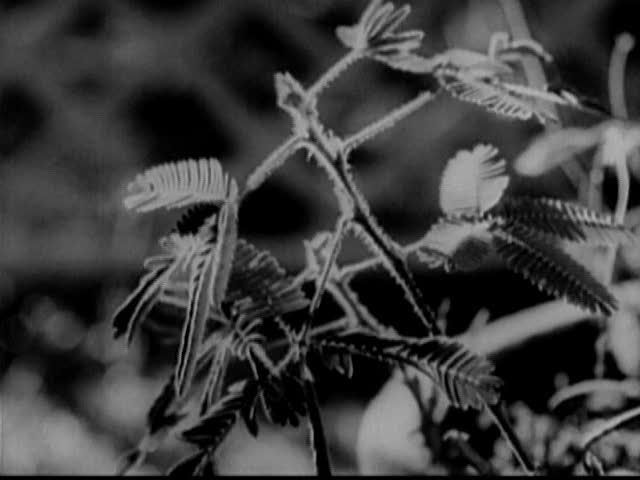 (In the greenhouse, cornered by Adhir, Sujata brushes against a Mimosa pudica (above), that reacts to touch by folding in its fronds - an apt symbol for herself!)

What the director associates in the movie with Sujata being touched for the first time by her suitor is the trembling frond of a tree: as she is touched, we have in a flash the picture of a quivering branch with leaves, which recalls the scene where Sujata, at first realizing that a pleasant-looking youth of a higher caste loved her, runs out in the garden and communes with the life of nature, a nature full of exuberant movement, as if it was dancing and twirling to answer the flutter she experiences at that moment. So just as nature has responded to her arousal, she herself responds (to Adhir) and braces herself, like a rope suddenly taut. In her, life which had naturally flowed from birth and had been stopped, is, by that touch, set free within her once again. Hence perhaps all the water in the film, all the tears, all the rain. When life flows again through her body, the shock she feels overwhelms her. There are also tranquil waters, as in this night scene: Of course the end is melodramatic and very predictable, and that’s one of the weaknesses of the movie. I would almost have preferred the union of Sujata and Adhir not to have been possible, because this would have seared a much deeper hole into the confidence of the India consciousness. Yet the image of the blood transfusion contains both power and truth. That the life of a dying community, represented by the mother Charu (Sulochana Latkar) needs to be transfused by the love of its enemies the untouchables, what a subversion of everything the Indian society used to believe in! And perhaps (as Madhu suggests in her review) India at the time needed the (“hard-hitting”) happy ending (and the unsubtle allusions to a crying Gandhi) to make it aware of the necessity of including dalits in the social fabric as everybody else, and so to transition towards an abolition of casteism. I’d like to say a word about Upendranath’s character (the father, Tarun Bose) whose calculated compromise with caste prejudice represents perhaps one of the reformist solutions. Not that he’s very adventurous! But his only half-refusal of the baby at the beginning, and his feeble enthusiasm at chasing Sujata when she’s little, coupled with a ready acceptance of her when sufficient signs of “destiny” have transformed the family into a foster one, all this has enabled her to escape death. He’s the one who gives her her paradoxical name, too. But of course, that name is true: she’s well-born, being born with the right, life-saving blood of generosity and selflessness. Upendra represents non-violent wisdom, even if not quite assertive enough, but such an attitude is for me by far preferable to revolutionary methods with their accompanying bloodbath. 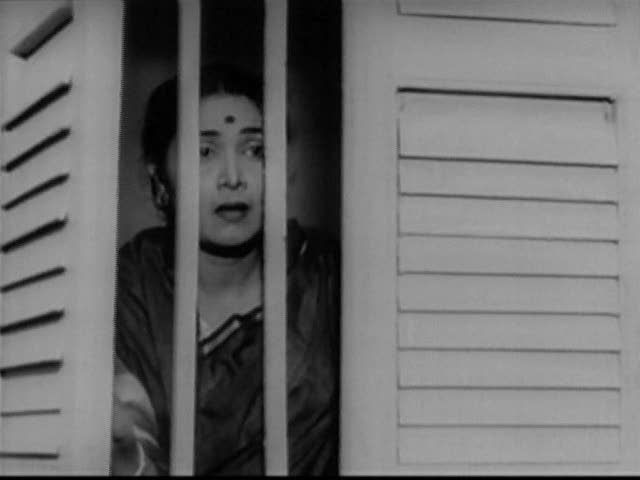 Some more pictures from the movie here!