Karan Johar’s My name is Khan (2010), starring Shahrukh Khan and Kajol – her great comeback since Fanaa (U me aur ham being not much more than a Devgan promotional), is a movie about truth and violence, like Fanaa in fact, with which it shares some similarities. One has a double pleasure while watching Karan’s opus – BTW, his comeback too since Kabhi alvida in 2006 – first SRK’s acting, a fine piece of work (more on this in a minute) and Kajol’s, who does a great job with her role as Mandira, definitely showing she’s one of Bollywood’s most serious assets.  First I’ll look at the actors, then the film’s meaning, and finally the controversies it provoked. Kajol doesn’t need to show any skin, (sigh of relief!) to be showered with praise, and today this in itself is worthwhile of great praise. She stands for what she is, and performs very convincingly. First she’s the active Americanised foreigner, successful and dynamic, even if divorced and a single mother; then she’s the adorable human being who sees another human being (and not a freak) in Asperger syndrome Kizwan, who most annoyingly at first wants her to marry him; and then after the murder of her child by anti-Muslim youths, she becomes the battling Justice seeker who teaches a lesson to detectives who have other crimes to deal with. And finally she shoulders her pain and grief to join her husband in his battle for tolerance and truth in an increasingly bigoted and fearful America.

This guy repairs almost everything!

Shahrukh Khan’s best role so far is right here. Like Rani Mukherjee had done in Black with the blind Michelle McNally (cf. Kajol as Zooni in Fanaa), he becomes Rizwan, and invests him with a realism, a strength, and a conviction which reminds one of Dustin Hoffman’s best performances. His story goes back to his Muslim youth in Bombay, where we see him battling against prejudice and incomprehension because of his difference (autism and cleverness), and being left alone with an ageing mother when his brother leaves for the US.  This mother is the source of his strength of character: she teaches him the basic lesson of brotherly love and the equality of all human beings created by one God: After she dies he leaves for San Francisco too, and there meets up with Mandira while working for his brother. What strikes first is his uncompromising spirit, his will to be looked upon as a person even though he’s handicapped. This is made clear in the speech he delivers in the hair-dresser’s salon, where he comes to sell his wares. Please listen to my words, he says, and don’t stop at my appearance, don’t buy my products out of pity, but because they’re good. This dissociation of surface and depth is the first step towards establishing the link which society often fails to make, that of handicap (or difference) and “acceptable” humanity. Exclusion from a community of fellow human brothers must not (should never) be based on chance differences – religion, handicap – but on the moral intention and the capacity to forgive evil-doers. Having chosen an autistic lead role is a great idea, because these people have a relationship with language which is like a challenge to social practices of self-defence and privacy, two individualistic features which cement civilisation with suspicious identities and polite distances (1). Never forget that all human societies (even civilisation itself), are based on language, and its recognised and codified uses. If you don’t use language in a recognisable way, you are considered as an idiot, or a madman, or sometimes a mystic (if your audience is religious).

Communities as a rule are based on similarity, norms, and fear of disparity, and individuals who practice an open acceptance of differences, and risk-taking (things which America had so far been so famous for, and which had shaped its history) are quickly rejected from the social body as alien. This rejection is sometimes done in the name of individual freedom, and often corresponds to older social classes who are well established in their rights and advantages. These in turn are challenged by younger generations, who haven’t been shaped too much yet by traditional wisdom – or unclassified (e.g. handicapped) people, who haven’t integrated this social knowledge. She realises she loves him, and looks at him, to say as much,

but he just points out "you're staring!

Rizwan’s great benefit to society is that he tells the truth bluntly, without hiding it, or transforming it so it becomes socially integratable (and so society can protect itself from its inflexibility). His handicap gives him a status between that of an adult and that of a child, and while his language intellectually belongs to adulthood, socially speaking, he lacks all the acquired softeners by which society adapts the truth to its comfortable lies, and virtue to its pleasurable vices. The best example of this takes place when Khan denounces the Islamic leader in the mosque on his route to Washington. In that period of anti-Muslim feelings, a half-mystical imam is preaching blood-duty in the name of Islam, in front of a group of serious-looking brothers. Khan is listening at the back, not knowing how to react, but suddenly it erupts: “No, no, no…” and going straight to the truth, without the acceptable language of dissenting opinion – which would have enabled his opponent to defend his ideas, he condemns him: “liar!, shaitan!”. Such words enable the others to unmask the imam, and later in the movie we learn he’s arrested, even if it will carry danger for Khan (he will be assaulted by an Islamist fanatic). But truth always carries with it this double and dangerous prophetic power: its proclaimer risks his own life saying it. All truth-sayers in history have verified it.  So all this, I think, should help to deflect some of the criticism that this scene is far-fetched and unrealistic: what Karan Johar is doing is examining the power of truth in a fundamentally deceitful society (that of civilisation as a whole, not only America), more than denouncing Islamic extremism, even though he’s doing that also (and I agree that he’s probably a little heavy-handed there – too preachy, as some say).

Kizwan’s use of language has repercussions in less dangerous areas, but nonetheless important for him and the people around him. When he has got in his mind that he loves Mandira, there is no beating about the bush: “marry me” he says, in lieu of sweet talk and romantic courtship. And she doesn’t accept because she pities him and wants to compensate for anything, but because behind this apparent coarseness, she has seen a warm and generous heart. Not only that, but perhaps she knows how civility can be only a mask. On Sam’s birthday, when she’s busy in the kitchen, Kizwan comes clumsily (it seems) up to her and asks her to have sex, she exclaims (because of the social rules governing when you do certain things and when you don’t): “What, now?”, and then realising this is an important thing and that certain joys cannot wait, she grins and saunters after him. 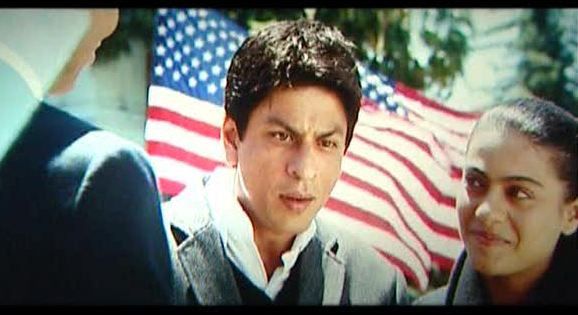 Language also connects with the concept of freedom of speech (Cf. the First Amendment): when Mandira after Sam’s murder cannot help blaming Khan for his indirect role in her son’s death, and tells him to leave her, she suggests that nothing he can do will bring him back, and taunts Khan: “go and tell everybody he isn’t a terrorist, what will it change? Go tell the President, it won’t bring him back!” Khan hears these words, and since he isn’t versed in social irony – that second degree, which we all master only too well when it suits us – it becomes a mission. This systematic obedience is part of his childishness, or lack of social skills. He books a plane, but because he looks strange, he is stopped by the airport police (and ruthlessly searched – reminiscences of Jesus-Christ during his Passion there) and prevented from boarding his flight, no compensation naturally. Undaunted, he decides to cross the United States, and takes the first coach!  Anyway he isn’t wanted at home… Karan Johar makes it clear nevertheless that an ordinary citizen’s desire to speak to his President is an arduous task these days! That such a basic democratic expression is so threatened says a great deal about the decline of the West, and also of democracy as a political regime.

Finally after many adventures (some of which unnecessarily melodramatic), he arrives at a meeting where the President is going to pass next to him, and despite a powerful distaste of crowds and noise, he makes himself pronounce the words he has promised to tell him: “My name is Khan and I am not a terrorist”. But what happens? Paranoiac Special Forces hear the fatal word, understand the exact opposite of what he has said (“he said he’s a terrorist!”), and grab hold of him in a panic! His sentence, born in a context which nobody is prepared to listen to first, before being able to understand it, is misconstrued because it fits all too well in another context, that of a frightened America, hell-bent on hate and revenge (2). What is sad and nevertheless revealing, and also brilliant from the point of view of the story, is that Mandira realises in the end that she has done the same, when requesting justice for her son, instead of exerting compassion and forgiveness. Mind you, it is clear that this wasn’t possible for her (cf. that scene at the football pitch), and it’s also clear that these virtues cannot nor shouldn’t replace justice. But it’s also clear that by appearing so adamant, she has perhaps prevented the witness of her son’s death from testifying. This Indian movie doesn’t always protect itself from imitating (in a very good way) the feel-good sensationalism of Hollywood family thrillers, but at least it possesses a high level of entertainment quality.  Witness what Shell says on her blog. She takes the point of view of the mother and identifies with Mandira, which is difficult not to do if you are one!  On the other opposite, perhaps, you can find Beth’s take on the movie as a gross misrepresentation of America. The film according to her is “maddeningly ignorant about contemporary American culture”. Well. She’s probably right. But even if this is true, I agree with Daddy’s girl (on Beth’s blog) who suggests that “there is a very strong and noticeable effort in MNIK to avoid stereotypes and to balance out the equation with some very positive portrayals of Americans”. But it’s impossible, perhaps, in such an entertainer, to avoid all the clichés and simplifications. And there are a lot! So I would suggest giving credit to Karan, to SRK and Kajol and not worry TOO much about faults and feelgood drama! (1) On a less important score, I half thought that the use of the autistic character for SRK was a good way to placate a suspicious Ajay that no adult love-scene was going to happen between his dear wife and long-time jodi-partner…

(2) Some commentators suggest this is exaggerated, but other recent historical circumstances have shown this face of an otherwise confidently powerful America…!