Here’s an unassumingly important little film. Shonali Bose's Amu is a kind of a detective-story, with young Indian expat Kajju coming back to the country she’d left when she was 3, and discovering about her past. We follow her as she little by little unearth facts about herself and about her foster family, along with a history lesson, situated around the time of the 1984 Indira Gandhi assassination  riots (See what the author says about them here: www.wsws.org/articles/2005/oct2005/bose-o06.shtml). What’s artistically very pleasant about Amu is the film’s realism - New Delhi, its crowds, its noisy streets, its colourful atmosphere (somehow I come out of the film bathed in that soft evening light) – the photography is very respectful of what we see - and at the same time, it is very much interested in people and their reality, their mystery (all those close-ups).

But more importantly of course, it fulfills a historical mission (how should the future generations come to terms with a violent past that they’re prompt to condemn?) which is also political (the film was censored because authorities thought that young people needn't know about a past that is best buried and forgotten!) and it also explores the psychological dilemma of parents who hide a truth from their children. 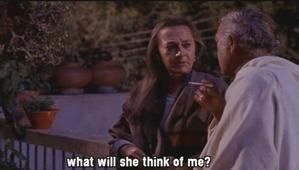 The film doesn’t give much to the audience in terms of songs and dances: there aren’t any. On the contrary it delicately evokes things that are often grossly publicised in standard masala movies: for example, we understand that love has happened between Kajju and her boyfriend, a retiring youngster who first criticised in Kajju’s what he believed was a tourist’s curiosity, when we see them fleetingly hold hands, nothing more. The young girl’s relationship with her foster mother is very nicely done. As spectators, we have Kajju’s point of view, and we share her emotions as she starts suspecting her foster mother of having hidden events concerning Kajju’s past which might be compromising for her. The disclosure of the truth will further deepen that subtle analysis of human relationships. So yes, Shonali Bose’s Amu is a wonderful film about identity, and the way this identity connects with our history. There is no satisfying feeling of identity without a truthful relationship to our history. The right to one’s individual origin parallels the right to one’s national history. And the temptation to deny those two types of right to those concerned comes from the same root: fear. Fear that the impact of knowing might counteract the benefits of ignoring. Fear of course that knowledge of the past will condemn in the present those who hid their roles in the past. Tyrants and totalitarian leaders of all ages have always kept a hold on what version of history to tell people. The pharaohs’ battle accounts engraved in stone reliefs are necessarily one-sided, because of the cost of making historical accounts. This is a fact that modern-day historians take into consideration. And dissenters tell us how revolutionary history was warped and twisted in Marxist regimes in the XXth centuries. But even democracies have a battle to fight in order to protect themselves against revisionism, or subtle re-evaluation (often politically oriented) of their past.

Our past says who we have been, and therefore who we are. Where we come from has a direct relationship to where we’re heading. It’s not fatalism, or determinism; it comes from the essence of knowledge. Memory is that essential part of knowledge which enables decisions, and free decisions too, to be taken. We base ourselves on a mass of experience coming from first our own lives, then from our family, our surroundings, our country, and finally our humanity. If the link between these realms of experience is cut somewhere, we feel a need to mend it, because our identity is composed of all these dimensions. Some people argue that parts of our past, or of our history is best forgotten, perhaps because it would be a source of violence if it were out in the open again, or because it would traumatise us and endanger our maturation process (this is often the reason given for children). And true enough, memory (through the phenomenon of repression) does make us forget things which our mind rejects as painful. Likewise, some countries’ postwar legislations, for example, have instituted systems of pardon and peacemaking which in effect have been “positive forgetting” institutions, if you see what I mean. But these exceptions cannot transform the fact that Justice is based on as much truthful history as possible. The link with our history must be clear-headed and adult, whatever the costs, just as psychoanalysis insists that a true recognition of one’s hidden impulses and guilty conduct will establish a sounder personality. Sometimes the truth is so abysmally destructive that very few can accept to confront it, and there is a very natural movement of both individuals and nations to forget, so that life may be possible. Such has been the case with the Holocaust, and many other genocides in the XXth century. Stone institutions had to be built, testimonies had to be digitally recorded, flesh and blood witnesses had to be filmed before their death transformed their materiality into half-flimsy memory artefacts, all this to raise bulwarks against the levelling tide of forgetfulness and relativity, or “reductivity”, this life-linked attitude of living creatures who must carry on living in spite of realities which would normally condemn them, and therefore reduce the importance or the extent of past crimes. Our conscience reminds us, yes, but it also sometimes tends to protect us by smoothing hard facts. And the responsibility of civilisation is therefore to erect monuments to man’s animality or monstrosity, so that he can learn from the past and remain human. It is also to educate children to remember, and to encourage historians and journalists to do their job. And committed film-directors too.


PS: this is an extended copy of a commentary made for Jaman.com, where the film can be rented at a low price. Thanks to the people there and their commitment to world cinema.

Addendum to this article: go check what Simran writes to Filmiholic's review of the film in one of the commentaries. It's here, and it's important reading!