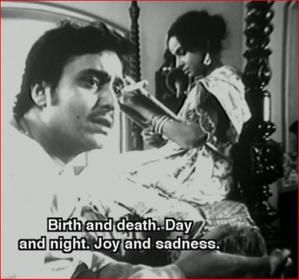 It’s become a recurrent syndrome: I need a second viewing or reading to appreciate some of India’s prominent masterpieces! (For it has been recognised as such, see this link, or this one  for example). This has been very true for Charulata (charu = attractive, beautiful), Satyajit Ray’s 1964 shooting of the Tagore novel (Nashta Neer, the broken nest). On first viewing, I was only fairly moved towards the story of this “lonely wife”. The fact that, for example, her attraction towards her brother in law is shown purely through her beautiful black eyes: - I was telling myself that this story-telling had the immense quality of real life, where love happens mostly via little signs which the mind detects clearly. Today’s cinema has the sore habit of underlining it thanks to such gross tricks! But apart from that sort of thought, I had trouble with the film’s slow-moving pace, with the seemingly unusual relationships between the characters; with the complexity of the historical situation (it takes place in 1864, in the home of a middle-class newspaper editor who hopes that his “liberal” journalistic work might change something to the British tax-system), and also I found the simplicity of the story a little off-putting. What does happen, I said to myself, in this film? A lonely wife falls in love with her brother in law, who spends some time in her household, and then leaves when the husband’s newspaper business collapses. She collapses too. Not much more, it seemed, than a simple character study, a social sketch. Well, that’s where art needs to be trusted. And you need to trust people who tell you: “Careful! Masterpiece!” I decided to see the film a second time, and started to understand the originality of the complex family and in-law articulations between Bhupati (the newspaper editor), his wife Charu, his brother Amol, her sister in law Manda, and her brother, who swindles her husband professionally. All these characters are of the same age more or less; they belong to the same generation, they share the same historical and social references, and so the film becomes an experiment of how their desires and values interplay. All of a sudden, you have in front of you not a chance family reunion, but a careful editorial choice. A busy husband disregards the boredom of his lovely wife; her exuberant and artistic brother in law replaces him around her; they’re half observed by the sister in law who makes an interesting n°4, and the one person the husband does look upon with sagacity averts his eyes in premeditated guilt. A complex observation game takes place, with some looking in the right direction, some in the wrong direction. The game of cards between the two women is typical of this rich underlayer of intentions. Manda is governed by her emotionality, her superficiality. She plays as if all of life was concentrated in what she is doing. For Charu, who is all eyes and detachment, there is a lot more elsewhere, she is the calm and obedient housewife, and she is also the brilliant and passionate modern woman. In keeping with Satyajit Ray’s observation games I had to re-evaluate the opening section, where Charu, locked up in her bourgeois mansion (and her social role as well-kept housewife) is watching through the darkened shutters the sun-drenched scenes in the street. It could be nothing more than an introduction to the character’s isolation and desires. She’s got her opera-house binoculars and her consummate skills underline the importance of the theme. But for Ray, she’s the centre of a show, of an observation game where the observer is observed, and observes in order to be observed. Charu is our go-between, our mediator. Modernity is thus a question of understanding the importance of looking and being looked at. As well as using that knowledge, of course (I’m alluding here to Frenchmen René Girard’s theories of mimetic societies. Check for example Deceit, Desire, and the Novel).

Let’s look at a scene where the theme of looking is so effective and subtle. One morning, Manda and Charu are in the bedroom, she’s doing some embroidery, while Manda is looking at the motifs inside a kaleidoscope which incidentally she uses like a telescope. She shouts her wonder at Charu, who scolds her for being so loud and says she’s “thinking”. Enter Amol, singing, with a Mexican hat on his head. He seems to be scolding Manda for something, but the words of his singing aren’t translated. Manda starts going away and throws the instrument on the bed, near Amol. He turns towards Charu: “What is this?” he asks of her embroidery, and Manda says “her duty”, before rushing out. Taking the instrument, he turns around, sits near on the floor the bed and sings “Brother is so lucky”, to which Charu answers, singing too: “You too will have one”. Using the kaleidoscope himself, Amol pretends he doesn’t know what she means and answers “what, hanky?” because apparently the word rhymes with duty in bengali. And she finishes off with an amused, very feminine look at him: “no, a wife”. And her mouth, pronouncing the word, kisses it gently. In this scene, we have an extremely elaborate interplay of purposes, which are symbolically expressed by the non-verbal language of the kaleidoscope and the meta-language of poetry. On the surface, things are socially and morally acceptable. But in fact the characters have been playing with the social codes; or rather Satyajit Ray has made them subvert them, enough to allude to the undercurrent of desire and passion between them. Manda is trying to see beyond her status, but is blocked from noticing anything but a self-reflected beauty. Charu, who is applying her mind, sees further, and when Amol enters, can follow his game of subversion with a graceful irony. He plays with his brother’s wife’s duty, and uses the kaleidoscope to stop Charu from noticing his double-dealing. But she’s perfectly aware of his game and rights his bantering to an acceptable reality: such plying with the social rules only means one thing: you need a woman to stabilise you. Yet, as she plays with him thus, she doesn’t realise that she is drawn towards him and is succumbing to his charm. No, in fact she does realise it, but she probably thinks herself strong enough both to resist him and to let herself slide pleasurably in his clever subversion of a social order which she accepts but makes her suffer. So we see that Charulata, far from being a social vignette, a “film de genre” (by which the French mean the cinematic representation of a given society at a certain period with its flaws and prejudices), contains an examination of questions that moral and spiritual thinkers and artists consider essential: what makes man (and woman) the social animal that s/he is? To what extent are the social codes that we use in our everyday life a source of fulfilment or of alienation? How much control must we exert on our instincts? Should we accept to transfer all this control to laws that we can then play with, provided we don’t go too far, or should all laws be constantly subjected to re-evaluation? I’d say Amol’s character corresponds to that questioning: it’s true he’s only a retarded student, he hasn’t got a real job yet. But he writes romantic stories. He’s a writer. And so we have him wander around questioning the conventional assets of the bourgeois society with its established order and values. Bhupati too is questioning the reigning order. And Charu as well, even if it’s in spite of herself.

There would be many other fascinating scenes to dissect in the film, notably the one in the garden, where Charu is on the swing above a lying Amol, but other passages would also deserve analysis. For instance, the storm scene: “There’s going to be storm!” shouts one character, and Amol storms in the household at that very moment, his hair and his shirt full of wind and dust. Or that scene between the two brothers who pit their strength one against the other in an arm wrestling one evening. In fact the film is made up of metaphorical scenes throughout. And the deceptively simple plot is like a matrix – and what better matrix for a criticism of a civilisation than the love triangle? – which commands a re-examination of the social codes and laws, and testifies to its fascinating modernity. 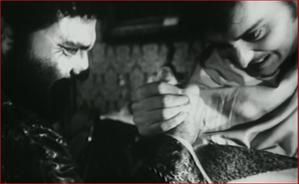