Seema (1955, Amiya Chakrabarty) has been hailed as Nutan Samarth’s cinematographical revelation. In this story of a wronged young girl, she shows a sensitivity and a maturity which are striking for one so young. At only 19, she effortlessly steals the show, so that one wonders what is left to say about the film apart from her. But rest assured, there’s lots.

Before I forget: thanks Madhu for having made it possible to see Seema, I had an unsubtitled copy and my level of Hindi isn’t yet that good to enable me to understand a movie from beginning to end. She indicated to me that some considerate fellow (thank him, too) had uploaded the movie on YouTube in 14 instalments…

If you’re reading this, you know I love Nutan, her vibrancy, her intense intelligence, her capacity to sympathise and create sympathy. But here, she obviously had a challenge to fulfil: she wanted to be recognised as an actress worthy of the name, and she gives everything she has. She has been blessed with that superior character and talent that so rarely goes along with sheer insolent beauty. So when she’s on screen, everything happens on that face. Mind you, she’s tall (as Bollyviewer suggests in her hilarious captions of the movie) and her figure’s comely too, but the eyes! the mouth!  There are so many expressions of feminine charm here that I am each time at a loss where to start. She makes me think that when a face reaches perfection, you feel sucked in, you’re attracted beyond it, towards the soul, nothing stops you. With an imperfect face, you somehow remain stuck on this side of creation. But with such perfect faces, something eternal beckons and peers through. And you know what? I have realized recently that she somewhat looks like what my mother in her prime used to look like (and was also born on the same year!), so I shamefully realise that perhaps all my rambling is nothing more than transferring on her a son’s unconscious admiration… Nutan the firebrand, says Sharmi : a good word! A troublemaker she certainly is, and of fiery mettle too! She reminds me of Durga and Shiva put together! But the whole idea is that she’s a victim of injustice, and that what burns inside, and radiates with such glare on her inflamed face is wronged kind-heartedness and hurt benevolence. Some individuals accept insult and are ready to sacrifice their rights as an atonement for the offender’s sins. But Gauri doesn’t, cannot and won’t. As a result, the friendly warmth of humanity that enchanted children outside her uncle’s house, when she used to tell them “kahaniyen” (stories), this warm friendliness turns into a windswept raging blaze, and naturally this will be used against her. Her offenders (a lustful co-worker and her jealous and avid Aunt and Uncle) just have to underline her verbal excesses and her violent reactions: they are easily turned into proof of her bad nature.

What’s original is Nutan’s handling of irony and mimicry. I’ve rarely seen her do that so well. At one stage, she’s playing with a helper’s authority at the ashram where she’s been shut up. First she pours hot water on her (her height helps her!), and then, as the poor creature shouts her indignation, the young fury is behind her, gesturing just like her to underline her submissiveness and lack of educational competence: Later, as she’s still considered unruly and bad-mannered by the system, (the educational framework used at the ashram, but also social values in general) a system which only considers and understands appearances, she deliberately describes herself as degraded and impious, whereas a strict moral logic would make her say the opposite, in order to defend herself. But she knows that the only way to jolt the scale of judgemental values out of their distorted habits is to exceed the criticism by exaggerating it. Nobody would believe her if she defended herself by just saying the truth. Guilty people lie all the time and say they’re innocent. So how can you prove your honesty in such a perverted system? This is why I refuse to consider that Gauri’s story is one of reformation or redemption: there is nothing to redeem in her story, and her one temptation, when she had wanted to misappropriate a coin thrown to a band of paupers singing for food, is resisted. And this, even if at that moment the lyrics read: Anger and rebellion might seem wrong, and for some people, be signs that she’s become corrupted. But anger is sometimes necessary! It’s a natural emotion which shows the person is reacting, and clearly Gauri’s reaction is as healthy as a fever in a body that erupts to fight against disease: aren’t injustice, machismo and slavery social diseases?  Isn’t she right to fight against the ingrained habit of defining somebody as a thief (it would the same for any offense, rape, murder, etc.) even though the person isn’t one? Your human nature hasn’t changed to thiefhood if you have stolen once or even twice. The society which bases itself on such an assumption, and defines individuals by what they have done in the past instead of trying to live with them in the present, is an unforgiving society, a cruel society which not only punishes the crimes, but also excludes the criminal forever. Without that second chance, justice isn’t justice. In the film, we see justice doing precisely what it should do, i.e., protect individuals against unfortunate circumstances (Gauri obtains court pardon the first time), but her uncle and aunt still throw her out without any consideration for what the judge has decreed. 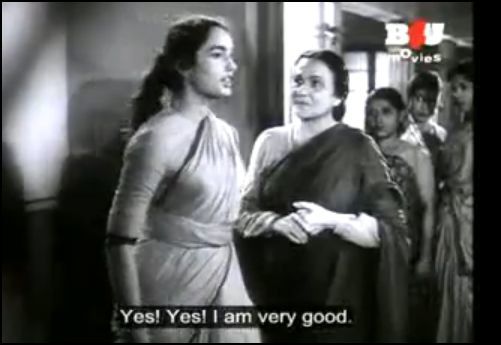 So Gauri has nothing to reproach herself with, and not only is her anger natural, but it is needed, as we have hinted, in a society where true declarations of honesty cannot be distinguished from the lying ones. And Ashok (Balraj Sahni) the astute babuji of the ashram isn’t fooled. For him such a violent reaction can only mean wounded innocence. Speaking to the head-supervisor who has come to complain of Gauri’s misconduct, he asks her how she would have reacted if she had lost her parents, had been wrongly accused, publicly branded a thief so that nobody wanted to give her work, had been thrown out of the only home she had with nothing else than the clothes she was wearing: the lady’s subsequent silence is the most eloquent answer.

It’s interesting to realise that the element of transformation of the tigress into a dove will be, not the prophetic shepherd himself (ie Ashok), but another inmate, Putli (Shubha Khote). It’s been said that Seema was Ms Khote’s best role. I’ve seen her in Anari and she was indeed wasted there. Here’s one of her photos: Now when it comes to Putli, the movie veers slightly to the preachy. Perhaps because not everybody is a Nutan, and can extract themselves from set roles by sheer artistic strength. Putli is made to catch a thief after a bicycle chase where she’s excessively shown as the valorous champ. But her reformation is nevertheless important in the story, because she’s Gauri’s friend (she allowed her to escape the ashram once, so that she could go and thrash her old enemy Bankelal – CS Dubey), and she serves as intermediary between Gauri and Ashok. Gauri has felt in her a true worth, and in spite of Putli’s past faults (she at first fights with her, not wanting to have anything to do with sneering inmates of her kind), she soon befriends her as a fellow sufferer of the injustice she also suffers from. Gauri thus needs to go through Putli, and Putli’s redemption, to understand that Ashok doesn’t belong to the hypocritical system of rehabilitation which she has all the good reasons to suspect. Thanks to Putli’s trust in Ashok, she will realize that within the midst of this corrupted system stands one who is trying to put forward the values of humane understanding and egalitarianism. For Ashok, all human beings are equal, and no one should be judged by appearances or on what a person has done. A person is always more than what he or she has done. The last part of the movie deals with the struggle a little artificial sometimes perhaps (as the Upperstall review suggests) – between Gauri’s growing love for Ashok and the latter’s refusal to accept her because he’s sick (a heart sickness, hint, hint) and would not last, as a proper husband for her. So he tries to make her marry his assistant Murli (played by Sunder), but this is really forced. What one remembers very well, on the other hand, is the haunting melodies (immortal Shankar-Jaikishan!), especially the two sung by Ashok, Tu pyaar ka sagar hai, and Kahan ja raha hai? The reactions and expressions these songs create on Gauri are especially noteworthy. I also enjoyed Baat, baat me tutho na, sung by Putli for her new friend at the ashram, and full of inventiveness and mischievous spirit. PS: I have one query for however knows: what does the title mean/refer to?